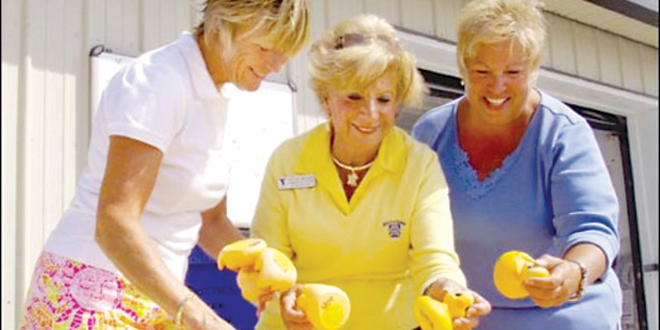 Dottie readies ducks for the race.

The Greater Marco Family YMCA will present two of its signature events as one seamless extravaganza of fun, healthy living information and fundraising. Both the Y’s Healthy Kids Day and the Dottie’s 20th Annual Duck Derby fundraiser will be held backto-back on Saturday, April 25 at the organization’s Sand Hill Street campus. “We’re trying to showcase our youth this year and make it more of a fun, interactive event and hopefully, get a good turnout from that,” said Charlene Garcia, the Y’s school age (after-school program) coordinator, who is also coordinating Healthy Kids Day.

The festivities will kick off with Healthy Kids Day, which has 10 a.m. start, while Duck Derby activities begin at 1 p.m. The events were held on the same day in 2014, but were essentially separate entities, unlike this year, when one will flow directly into the other. Healthy Kids Day offers 20-minute long interactive exercise class demonstrations such as zumba, karate, tennis conditioning and Drums Alive (aerobic drumming) led by their respective Marco Y instructors: Jennifer Tenney, Nick Lemke, Eden Looney and Kathy Kurtz Crowder. There will also be information about summer camp registration, swim lessons and other Y programs. Event sponsors Krieger Orthodontics and Walgreens drug store will be present with healthy living information. They will be joined by “McGruff the Crime Dog” and personnel from Marco’s police and fire departments, who will dispense water and bicycle helmet safety tips for children and also check the helmets to ensure they are safe and fit properly. There will also be a healthy living and nutrition book fair. “We open up our doors to the entire community and we try to invite vendors who have the same mission, to encourage families to have healthy lifestyles,” said Garcia. “We want to encourage healthy lifestyles and open up (exposure to) the local resources in one unified place so families can come and pick up brochures and flyers.” New to Healthy Kids Day this year will be the Color Run, for which a makeshift mini-track will be set up for children along one side of the main Y building. The races will be broken down by age group and as the youth’s race they’ll be doused by a chalk-like, colored powder. The winner of each of the three Color Run age groups will receive a duck to be 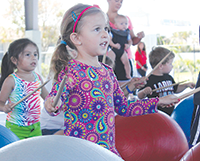 entered in the Duck Derby. The ducks will also be on sale during the Healthy Kids Day portion of the festivities. The Duck Derby fundraiser, which benefits the Y’s aquatics program, was started by its namesake, Dottie “Miss Dottie” Weiner. The Y’s pool and aquatic center, where the derby is held, are also named after the woman who started its “Learn to Swim” classes in 1972. She directed the program until 2012.

Ducks can be purchased for $15 for one or $25 for two. The Celebrity-Rock-&-Roll ducks are $30 apiece, as are the CorporateConcert ducks, which can be kept by the purchaser. Corporate and Celebrity ducks can also be purchased for $50 and be kept by the buyer after the event. The ducks are entered in three separate races, with fire department personnel propelling them the length of the pool with fire hoses. Children in the Y’s aquatics program and on its swim team will race in between heats and there will also be pool-based games for children. Weiner is the reason for Duck Derby’s success over the years, said Fritzi Holmes, a member of the Y’s board of directors who is also chairman of this year’s event. “Dottie is awesome,” she said. “She always would go out and do lots of fundraisers and of course, she was always passionate about the aquatic center. People respect her and when she would ask them to buy a duck, they would buy a duck. It’s (buying a duck) the good deed of helping ensure the aquatic center continues. All the funds go to the aquatic center, so it’s a good cause. It’s an excellent program and an excellent facility.” Weiner was a championship swimmer and diver in her youth. “People have been wonderful and cooperative for all these years and we hope we make money this year,” said Weiner. “It goes to a good cause.” She is also overjoyed with the aquatics program’s success. “It helps saves lives, so that’s one good reason (for the program’s staying power),” said Weiner. “They do a terrific job.”