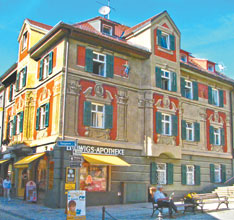 In Germany, a pharmacy is called an apotheke. PHOTOS BY VICKIE KELBER/COASTAL BREEZE NEWS

From some of our travels I have learned what it can be like to experience illness on a trip, how to negotiate various needs, and what to do to try to stay healthy while preparing for unforeseen events.

Back in the 90s, just after the “Iron Curtain” came down, we visited Prague and my husband became very ill. All afternoon, I urged him to go to a doctor, but you know men! Finally, at 2:00AM he broke down and wanted to see one. We were staying in an apartment and our contact person was not available so we were on our own in finding assistance. In a guide book, I had read about a hospital once used by Soviet dignitaries; supposedly English was spoken there. I called but knew we were in trouble when I asked the person who answered the phone if she spoke English and she replied, “go ahead and speak your French”. After much discourse with a physician who spoke only a few words of English, he arrived at our apartment and I learned my first lesson; always carry a local language book. Fortunately, I had my Berlitz Czech phrasebook and was able to point at the symptoms. He gave my husband two shots, using a razor blade to open the glass vials of medicine and a prescription for what looked like charcoal tablets that I had to fill at a Soviet style pharmacy. He apologized that for the emergency visit he had to charge us $45 which included the car service he hired for transportation.

My husband has occasional sinus problems and doesn’t typically pack medication so I have learned how to deal with obtaining it in various countries. In Venice, there are English speaking physicians in every farmacía. In Spain, he had over the counter medicine with him but it ran out. I brought the packaging to a farmacia, where the pharmacist read the active ingredients and gave me the equivalent. In Russia, where it seems that bribery is greater than the GNP, he “tipped” a ship’s doctor for enough pills to get him through the land portion of our trip. In Mexico many medications are available without a prescription; when a throat infection struck, I asked the pharmacist for pastillas para la garganta (pills for the throat) and was given the appropriate antibiotic.

When we were younger, I never thought about illness and travel. I’d like to say that my concerns about it now are because I am older, wiser, and have more experience, but, the fact is, as we mature we are increasingly faced with the prospect of ailments. I hate to admit it, but now when traveling, I have become somewhat of a germaphobe and take precautions to help stay healthy, particularly when on a plane.

It has been reported that the water used on planes to make coffee or tea has been found to contain harmful bacteria and the temperatures used in brewing are not high enough to kill them. I always choose juice without ice.

I have one word for the seatback pocket on a plane – yuck! There can be all sorts of debris in there that I don’t even want to think about. I try to avoid storing anything there. I have a lightweight bag that I use to keep everything I think I might want on the plane and stash it under the seat. I also carry an extra plastic bag; if I do store something in the seatback pocket, I put it in the plastic bag first and then dispose of the bag when we land. 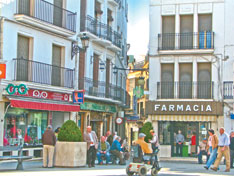 another concern. I bring individually wrapped antibacterial wipes and wipe them down as soon as I am seated. When I first started using them, I thought it would bring strange looks from seat mates. I can’t tell you how many people have said to me, “what a good idea….I wish I had thought of that.”

Purell has become my new best friend. I use it frequently when traveling, not only on the plane but also when I am out and about, especially after I have touched anything like a handrail. I’ve been told by a flight attendant that many of them put it in their nostrils to help ward off germs. I know doctors recommend keeping one’s nose moist, not with antibacterial gel, but with a nose spray or gel. In the bathrooms, I try not to touch anything, using a paper towel to do things like lock the door and turn on the water.

It’s important to be prepared for minor medical problems and bring a small pharmacy with you. Fortunately, we’ve never needed it, but I always pack Immodium. Our pharmacy kit also contains aspirin, band aids,and Neosporin. I never forget travel tissue packs: they serve many purposes, from napkins, to toilet paper, to makeshift band-aids. Flip flops for the shower and walking about the hotel room are a must for this germaphobe. And I try to remember to turn down the spread before sitting on a bed.

Don’t assume the concierge at your hotel can always help. Research English speaking doctors before you leave on your trip or check with your credit card company; many have a phone number for travelers’ assistance which includes physician referrals.

Update your tetanus shots and if you are going any place exotic check with the CDC to see if there is an advisory for any additional vaccines. Their website http:// wwwnc.cdc.gov/travel/destinations/list. htm lists health advisories for various countries.

Make sure to pack your medications in your carry on. It’s a good idea to keep them in the original containers. Not only will that avoid questions during security searches, it will also provide information if you have to refill. It’s helpful to pack a copy of your prescription and if traveling outside of the country, include the information sheet that accompanies your medication. This will assist a physician who may have to refill lost medication or who may have to prescribe something additional.

If you have special dietary restrictions, learn how to indicate your needs. If you can’t tolerate caffeine, learn to say decaf in the language of the country you are visiting. Cafe Hag is a worldwide brand like Sanka; I’ve always found most waiters know what I mean when I order it. For people with celiac disease, there is a website where you can print a card in the language(s) of the country(ies) you are visiting that will explain your dietary needs: www.celiactravel.com/cards/

Finally, don’t forget medical insurance as Medicare and many other US insurances will not cover you if you travel outside of the country. I’ve written about this in a previous column. Check it out at http:// coastalbreezenews.com/2011/05/06/ odds-and-bobs/ for further information.