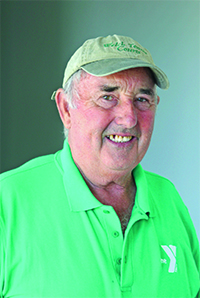 Submitted Photo:John Joyce lost 35 pounds, much of it due to the Y’s CHIP program.

John Joyce lost 35 pounds, and attributes much of that to a YMCA program that is gaining momentum, CHIP.

It’s the Complete Health Improvement Plan, and its goal is to encourage a plant-based diet and exercise along with resultant physical and well being.

Joyce is being hailed as the “poster child” of the program. “Did you see me on the milk carton?” Joyce quipped at the start of a new pilot program now underway at the Y’s Youth Center at  the Sand Hill Road campus.

Joyce, who is employed at the Y as a maintenance assistant in the tennis department, was part of a group of about 12 people who recently completed a seven-week “trial run” of the program, officially called the Complete Health Improvement Program.

It involved shifting to a plant-based diet and exercising with the promise of improved overall health, resilience, stress management and indeed weight loss.

“The change is not the weight alone, but the way you feel and the extra energy,” Joyce told a new participating group this week. “Now I get up at 5 and I can go all day. Before that I was very lethargic.”

Joyce said a couple of years ago he had consistently put on weight. He then made the decision to try to lose it, relying mainly on homemade smoothies to do the trick. That worked to an extent, he said, but the CHIP program was the game changer, with its accent on grains, nuts, fruit and vegetables; and avoiding most oils, meat (particularly processed meats) and caffeine, to name some.

“As time went on, I got to like the food better,” Joyce said, “and I got better at cooking it as well.” He said his current food intake is usually oatmeal or two boiled eggs for breakfast, and beans, lentils along with chicken or fish for lunch and dinner.

“It also takes away the desire for the sweet stuff after a while, and it gets better,” Joyce said. “I (admit) I wasn’t that good for Christmas, but I wasn’t that bad either.”

Linda Oakman also chose to continue with the program, which runs Mondays and Thursdays from 1 to 2:15 PM. “I learned what not to eat,” Oakman said. “I also learned that if you do cheat, you don’t just disregard the rest of the program…you just go back and continue.”

Program organizer Deborah Passero (who is the Y’s healthy living director as well as exercise physiologist) said she bestowed the poster child designation on Joyce because his whole attitude had changed along with his weight loss. Equally impressive, she said, was that his physician had taken him off two
medications.

Now Passero is looking for more takers for the program, which would normally cost participants $599. Instead, they merely have to chip in $10 ($5 for Y members) for each session to cover the cost of healthy lunch meals made especially for the sessions.

The sessions include informative videos, and Passero has also lined up medical professionals to give talks. In addition, four chefs in their own right will rotate for healthy luncheon presentations.

One of those is Hilton Marco Island Resort executive sous chef Joseph Merheb, who plans to pass on some of the benefits to his diners.

“I want to help educate people how to eat healthy and better,” said Merheb, originally from Lebanon. “To eat good means to feel good, and good direction will help people.” He said the Hilton menu already has healthy options, but that he will add to them as a direct result of the CHIP program.

For more information on the Y’s wide assortment of programs and activities for youth and adults, call 239-394-3144.