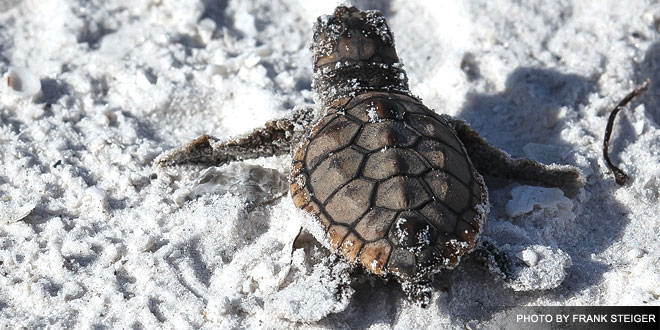 Sea turtle hatching season is in full swing all over the state of Florida.

Every year, female loggerhead sea turtles and a few other varieties make their way to the beaches to find the perfect spot to lay their precious eggs – around 100 per nest. These eggs go through an incubation period of about 60 days before they break free, dig their way out of the sand and make a mad dash to the ocean.

Predators await these hatchlings at every turn. While still in the nest, raccoons and ghost crabs are their biggest threats. If the nest is too close to the shore, the eggs could be washed out at high tide.

There is also the human factor. Many Marco Islander’s know Mary Nelson, Marco’s “Sea Turtle Lady.” During season, she tracks nests and marks them off with caution tape to keep beach goers from trampling over the nests. Unfortunately, there have been cases of footprints inside these marked off areas which could lead to the crushing of the eggs. When setting up shop for a day at the beach, one should remember to keep a safe distance from the nests as the locations are marked but may not encompass the entire nest area.

If the hatchlings make it through incubation, they then must face more raccoons, birds, sharks, prey fish and more. It is said that only one in 1,000 will make it to adulthood. For this, the sea turtles are highly protected, especially throughout Collier County.

It’s been an exciting season for Marco Island as last year’s nest count and hatchling rate were lower than the norm. This year, however, seems to want to make up for the loss of numerous nests due to two tropical storms in 2012.

To date, a total of 93 nests have been marked off on Marco’s beaches, which includes the seven mile stretch from South Beach to Tigertail, all of Tigertail and Sand Dollar Spit as well as Hideaway Beach. Last year, a final total of 52 nests was tallied; a count that fluctuated throughout the stormy season. Those 52 nests only produced 19 hatched nests. 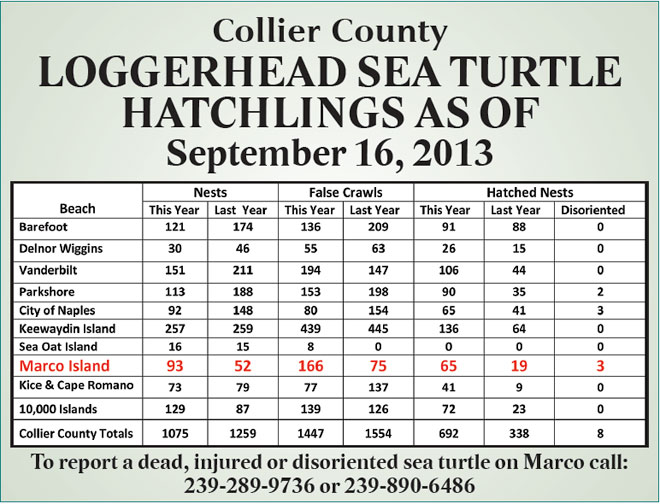 of the 93 nests counted this year, more than 65 nests have hatched! Mary Nelson and sea turtle lovers alike couldn’t be happier, especially since the season typically lasts through the end of October. This means there could be many more hatchlings to come.

Each hatched nest is later dug up by Mary, and the number of hatched eggs are counted. The nest locations are also kept track for a long term study via a GPS system.

Marco Island ordinances prohibit just about any lighting on the beach after dark during the May through October season. Females may be disturbed by them and refuse to nest, but the lights pose the biggest threat for the hatchlings. Condos and hotels along the beach take rigorous steps to keep their lighting at a minimum and can be fined for leaving lights on, especially if it results in disoriented turtles.

These tiny hatchlings run to the moonlight which is reflected off the water. Any other lighting, whether it be a flashlight or the flash of a camera can not only send the turtle in the wrong direction, but can temporarily blind the minutes-old hatchlings.

This season has seen three disoriented hatchlings with the cause being unknown. Found during the day, at least one was able to be saved and turned in the right direction towards the sea. The hatchling was allowed to be photographed only because it was daylight, and no flash was necessary.

Please remember, summertime is a sensitive time for our sea turtle population. It is easy to live in harmony with these beautiful creatures. Remember to remove anything you may have brought with you to the beach including chairs, tents, toys, fishing equipment and anything else that could cause these turtles, adults and babies, to become disoriented. Please fill holes dug in the sand and smooth out any sandcastles or structures as you leave. A smooth and empty beach in the evening is the ideal nesting or hatching situation for the beloved sea turtle population.