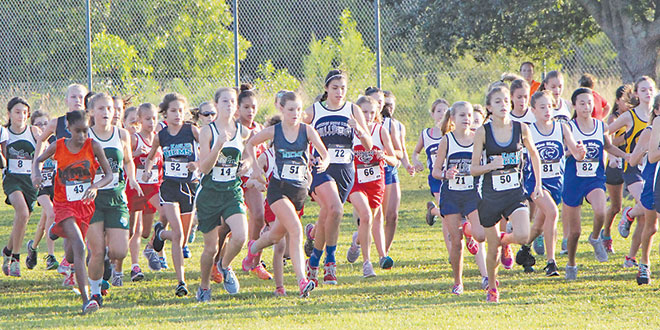 The field blasts off the starting line in the race on Saturday, October 24. PHOTOS BY PATRICIA POLING

Again it was a battle of girl’s teams at the Collier County Athletic Conference Cross Country Middle School Championships on Saturday, October 24.

Gulfview and Marco Island girls battled, but the outcome was the same.

No one else was close. Third went to Pine Ridge with 98 points. North Naples, 99 and Oak Ridge, 130, rounded out the top five schools.

Siersha Schrack led Gulfview with a fourth-place finish in 12:23, ahead of Ellie Poling who clocked in at 12:57.7. Gulfview’s D’Antonio was sixth, Tallulah Bowden, seventh, Sarah Sullivan, tenth and Riley Mitchell, fourteenth.

The boys race was extremely close. Gulfview’s Brady Gibson raced his team to the title in a time of 10.01.9 for the 1.8-mile distance, just edging out Gabriel Chalick of North Naples, with a time of 1:02.5.

Marco Island’s Johnny Watt led the team with a tenth place finish in 11.12.2. Michael Mertens clocked in at 11:15 for thirteenth. He was followed by Kevin Barry, twenty-fourth, Enrique Vizcaya, thirty-third and Fernando Martinez, thirty-sixth.