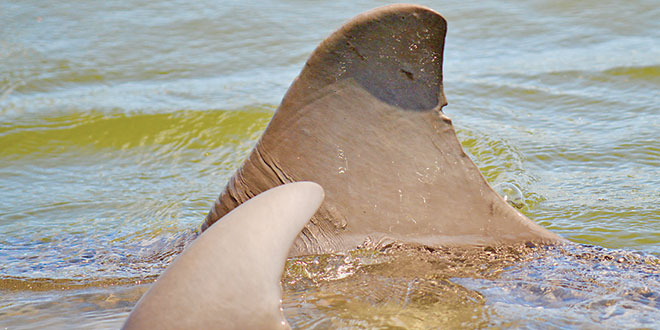 Photos by Bob McConvilleHalfway, one of the most productive females in Marco’s waters, with her new calf, Wyatt.

Dolly, Halfway, Nibbles, Rangle, Sparky and Sydney…sounds like a random selection of words from a dictionary. In fact, these are the names of some adult female bottlenose dolphins seen in the Marco waters. So what do they have in common? All of the above gave birth to calves during the month of September!

Baby dolphins can be born at any time of the year but in the Marco Island area we see most of the births taking place in the fall months. This year has been a very good start.

Last fall the crew on board the dolphin survey boat Dolphin Explorer sighted seven new calves, and five are still surviving. One of our first-time moms was Sintas, who gave birth to J. Fireball. The unique circumstance here is that Sintas is the daughter of another adult female named Giza. This makes Giza our first confirmed grandmother known in this area. To top that, Giza had her own calf last fall, making her a grandmom and a new mom in the same year!

This fall’s mothers have some interesting stories as well. Nibbles gave birth to Popcorn in late September. In 2007 she gave birth to Jayson. Nibbles and Jayson were seen quite often in the area near the protected bird islands just east of the Jolley Bridge for five years. In 2012 Nibbles gave birth to Coco in the same area. This is when we notice a change. Not long after Coco was born Nibbles moved her newborn about four miles north. Jayson remained in the original area. Nibbles continued to raise Coco in that new northern area until about three months ago.

At that time we recorded sightings of this mom and calf back around the bird islands. One of the first theories was that the bird island area might be Nibbles’ birthing area. In late September our thoughts were confirmed and Nibbles gave birth to Popcorn, in the same area as Jayson and Coco. It will be interesting to see if this mom stays in this area or moves Popcorn to a new location. Time will tell.

My favorite female to give birth this year is Halfway. Her newborn was first seen on September 29th. The calf’s name is 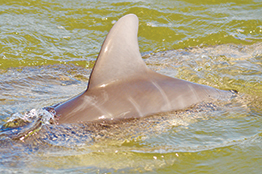 The creases in Wyatt’s skin, called “fetal folds,” come from the positioning of the fetus while in the womb, and will only be visible for a few weeks.

Wyatt. What’s so special about Halfway, you might ask. This mom gave birth in 2004, 2007, 2010, 2013, and again this year. Every three years, like clockwork, she has a new little one. She is one of the most productive females in the Marco area, and all of her known offspring have survived. It seems that she knows how to raise them, keep them out of harm’s way and to teach them properly how to continue life on their own when she has a new calf.

We know for sure that her three-year-old is a female. If this juvenile named Skipper survives the first years on her own and, if mom’s reproductive capabilities carries forward, there is a potential that Skipper could be one of the most productive females in a few year’s time!

Of the other females mentioned above, Rangle is the most unique story. In 2012 she was raising a two-year-old named Mocha. A boat traveling in shallow water made contact with Rangle causing a severe head injury. The boater called the incident in to the authorities, and we were able to take photos of this wound. After sending these pictures to several agencies we were notified that the wound was very severe and Rangle might not survive. She not only healed on her own, she continued raising Mocha and was pregnant and gave birth to Bubbles later in the fall. Bubbles is now four years old, and Rangle has a new little one to nurse, named Ollie!

When you study the dolphins like the crew on the Dolphin Explorer does, it brings these creatures to life. They are not just another mammal swimming in our waters. They seem to have personalities and some tend to have a bond with one another. They are almost like family to us.

There are a few more females in our waters that have the ingredients to be included on our list as potential moms this fall. Time will tell. Who knows…maybe babies #7, 8 and 9 will be seen in the next few months!

Bob is the owner of Stepping Stone Ecotours, conducting tours of the Big Cypress Swamp area. He is also a naturalist on board the Dolphin Explorer. Bob loves his wife very much!