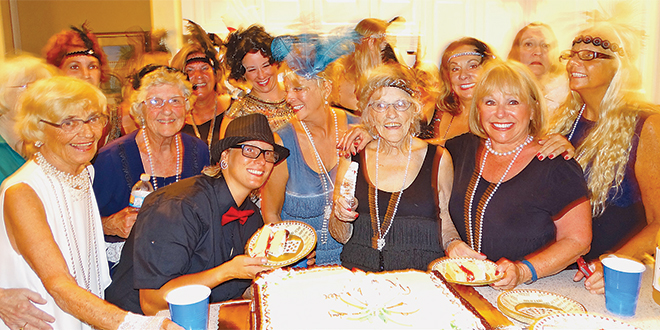 Photos by Steve Stefanides: Mrs. Jarstad, the ringleader, cuts the cake at her 90th birthday party.

When Linda Hess was planning her mother’s Roaring 20’s party to celebrate her mother’s 90th birthday, the only person she didn’t show up was Elliott Ness. Even without the famous G-Man, Caroline Jarstad thoroughly enjoyed herself as she celebrated with family and friends earlier this month at the Courtyard Towers Clubhouse, which was appropriately decked out for the occasion.

Female guests came attired in flapper outfits, and the men wore appropriate attire to reflect those interesting times. Mrs. Jarstad was even carried to the event by a 1949 Wolseley four door sedan, where she was greeted by about 75 of her family and close friends.

Beaming from ear to ear with a smile that lit up the room, Mrs. Jarstad moved from guest to guest thanking them

for coming to help her celebrate her milestone birth day and enjoy refreshments that might just have been illegal during the era of Prohibition.

When you entered the clubhouse you might have thought you had been ushered back to a day when the “Speakeasy” was in vogue. From crap tables, to roulette wheels, card games and blackjack tables guests could try their luck with the chips they could purchase with a fake $80,000 certificate from the house.

“My mom has enjoyed a great life,” said Gary Jarstad, her son who lives just off 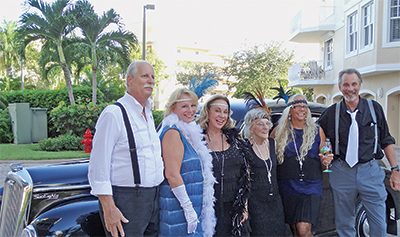 “Kids” hanging out by the car.

the island. “She enjoys being out with people; she’s like the Energizer Bunny and is the life of the party no matter where she is,” said Jarstad. “She just loves people and is a lifelong Brewers and Packer fan.”

Linda Hess had the birthday cake adorned with the words, “Ring Leader.” “That’s my mom, she is always getting everyone together for a great time,” said Hess.

The “Ring Leader” circulated around the room all evening, with a drink in one hand and chips in another, beaming ear to ear. She was looking to engage one of her friends in conversation or for a spot at one of the tables to see if she could make a little money. At the same time she made everyone there happy they could be there to celebrate with her.