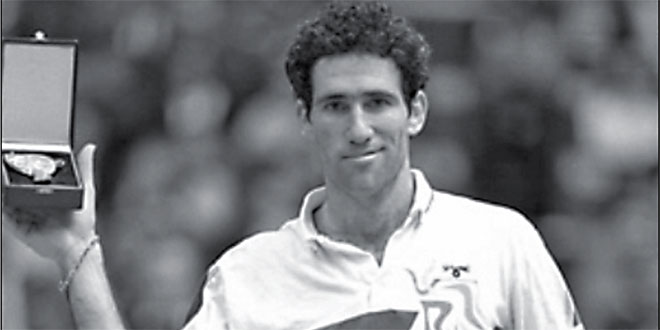 Brad Gilbert in his playing days,

All of us get anxious and nervous about things. As a high school or college student, it may SATs or final exams. In our careers, it may be a new job interview or a meeting with your boss. Maybe you don’t like to speak in public or in front of large groups.?Some of us don’t like to fly or we have a fear of heights.

Whichever one it is for you,?the truth is, in sports, everybody, even the great champions, gets nervous when competing.

Whatever the occasion, the main reason we get nervous is because we don’t want to fail and not live up to the expectations that are put on us.

Brad Gilbert, who competed on the Pro Tour and has coached top ranked professional players, has shared his advice on handling nerves in competition. Brad is currently a tennis commentator on television.

I share Brad’s insights with all of my juniors players when they begin to play competitive tennis, to help them deal with their nerves.

These tips can help everyone, not just with sports competition, but also with any aspect of life that may cause anxiety and nervousness.

1. See them as a sign from your body that you’re ready to compete. It’s the positive “ready to go” adrenaline.

2. Even the very best athletes in the world get them before a match. Nerves are telling you that something great is going 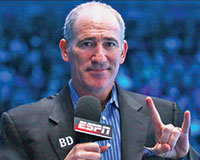 to happen out there today!

3. Have a routine before a match to help you channel those nerves. Some athletes use music or playing cards to help them switch their minds off.

4. Think of it this way: Your opponent is probably even more nervous than you, except the difference is that you know how to handle it better. (Unless they read this article as well!)

5. If you didn’t get nervous then what you were doing wouldn’t mean that much or be that special to you.

6. Expect them. Give yourself the freedom to make some mistakes at the beginning. When you give yourself this passport, you will be “free to play.”

So my message is this: embrace nerves, change the way you see them, and remember that even the champions get them. Emulate these champions by looking confident next time you walk out onto the court and know that you are ready to compete. Remember, nerves are your fuel to perform!

Everybody gets nervous. Knowing how to positively channel these nerves is vital to self confidence and success.

During this year’s Wimbledon Championships, I saw a post match interview with the Men’s Singles Champion, Andy Murray. Andy commented that even though he had previously won Wimbledon in 2013, he was more nervous going out onto Centre Court for the final match this year, because, this time, he was the odds-on favorite to win.

In the Ladies Championship final between Serena Williams 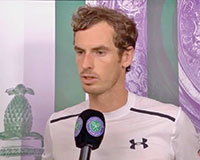 and Angelique Kerber,?when the two players were preparing to make the walk from the locker rooms to Centre Court,?I noticed that Kerber was first out of her locker room and had to wait for Serena to come out. When Serena did come out, she immediately presented herself as being in charge and took the lead, walking in front of Kerber, through the hallways and eventually onto Centre Court. Even though the two players walked on the court together, Serena walked in front, already presenting herself as, “this is my house – I own this place!”?Was Serena nervous? You bet she was! But she refused to show it!

For me personally, whether I am speaking to a large group or competing on the tennis/pickleball court, I have discovered that the first thing I have to do is accept is the fact that I am going to be nervous and I will make some mistakes.

Once I have made a few mistakes, I force myself to try not to hide the fact that I have done something stupid and embarrassing. I don’t concern myself with the fact that other people are watching and may be laughing at me. I laugh at myself! Which means I am now laughing with them and?I am no longer worried or concerned about feeling embarrassed. I am now feeling much more comfortable in my surroundings. My?ability to perform at my best has now become 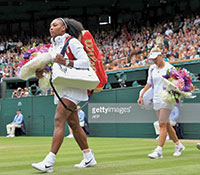 second nature. My game is now on cruise control, and win or lose I can now enjoy myself. As Brad says, allow yourself to be “free to play.”

So remember, you need to change your mindset. Find whatever it takes for you not be embarrassed with yourself. Don’t worry about people who may be watching you, they have all done stupid, embarrassing things themselves. Feed on all of the energy that is created by feeling nervous. Realize that something great is about to happen and utilize that energy in a positive way. Be a like a rockstar walking on the stage to perform!