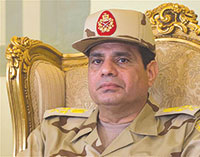 One of the most difficult aspects of writing an opinion piece on world affairs a week before publication date in order to meet deadlines set by the newspaper is the speed which things can change around the world. What seems to be the most important thing on the morning of Saturday, Feb. 15, may be old news by the morning of Sunday, Feb. 16. Therefore, it is very important to pick a topic which is universal, dynamic and may not change much in a week’s time. Our country’s continuous adventures around the world with the very best of intentions — to bring freedom, democracy, women’s rights and best of all a feeling of self-respect and dignity to the oppressed peoples of the world and inevitably running into corrupt leaders and massive corruption — is one those stories that may not change anytime in the near future. We can probably pick any number of examples on a daily basis; yet because of the events of last week, we will examine Afghanistan and President Hamid Karzai.

We went into Afghanistan immediately following 9/11 with two main goals: to get rid of the Taliban and Al-Qaeda and to stabilize the country enough to make sure they can elect their own government and achieve stability. As of today, it seems like neither one of these goals will have been achieved when the last American military personnel along with their Coalition partners leave Afghanistan by the end of this year.

Those of us who are interested in world affairs and their implications on our daily lives here in America were most interested in the events taking place in Afghanistan last week. At the center of all was the President of Afghanistan, Hamid Karzai, a complex, well-educated and strong-willed man who has to leave office after the presidential elections which will be held on April 5. The incumbent president will not be eligible to run due to term limits. The registration period for presidential nominations was open from September 16-Oct. 6, 2013. A total of 27 candidates were confirmed to be running for office. However, on Oct. 22, Afghanistan’s Independent Election Commission disqualified 16 of the candidates, leaving only 11 in the race. Opinion polls as of today show Abdullah Abdullah and Dr. Ashraf Ghani as the front-runners.

Last week, after he unilaterally released 65 Taliban prisoners from jail before they were tried in court and were being held on charges of killing at least 32 Americans, Karzai drew the ire of many around the country and around the world. He was called “a despicable man,” a “crook,” a “common criminal” and was described as “mentally unstable” and “not fit for office.” Obviously, many of these were well-deserved descriptions of a man who was brought into power in Afghanistan by the U.S. and our Western Allies only a short 10 or so years ago and now seems to have turned on us in a publicly embarrassing way.

I thought it would be well worth the time to look into the life and works of this man, who is now considered by many to “have left this planet” and traveled to “another, unknown place!” President of Afghanistan Hamid Karzai was born on December 24, 1957, to a distinguished family in the small village of Karz, located on the edge of Kandahar City in southwest Afghanistan. He was educated in Afghanistan and at the Himachal Pradesh University in India, and is known to be well-versed in several languages, including his native Peshto, Persian, Hindi, French and English. He rose through the political ranks during the turbulent Soviet occupation. In 1980, when the Soviet Union invaded Afghanistan, Karzai traveled to Pakistan to work as a fundraiser supporting the 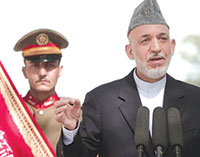 anti-Soviet Mujahedeen fighters’ insurgency. During this time, the Mujahedeen were secretly supplied by the United States, and Hamid Karzai was said to be a contractor for the CIA.

He emerged as a resistance leader under Taliban rule and worked to undermine the regime. He became president in 2004 after American-led forces had overthrown the Taliban in Afghanistan, and was reelected in what is considered to be a “fraudulent election” in 2009, when his only opponent withdrew from the run-off election.

He is an ethnic Pashtun of the Popalzai tribe and has six brothers and one sister. His grandfather, Khair Mohammad Khan, served in the 1919 war for independence, and was deputy speaker of the Afghanistan Senate. Karzai’s father, Abdul Ahad Karzai, was a popular tribal elder and political figure who served as deputy speaker of the Afghan Parliament.

For those who are not familiar with “tribes” and “tribal life,” it is important to emphasize that most countries in the Middle East as well as in Africa are made up of various tribes which preserve their unity and traditions throughout history all the way up to the present day. Tribal leaders are revered and obeyed. Intermarriages between tribes are not allowed, and members of the tribes usually speak local dialects to preserve their identities. Afghanistan is made of many tribes, and the Pashtun Popalzai tribe to which Hamid Karzai belongs has an estimated population of 500,000 members.

As a consequence of the events of last week and the fact that Karzai still refuses to sign the “Security Agreement” with the United States, which was overwhelmingly approved by the Loya Jirga (grand assembly/grand council) of Afghanistan and supported by China, Russia, and the Central Asian countries, as well as Turkey, Saudi Arabia and the United Arab Emirates (all of whom either face or fear militant Islam) with only disapprovals coming from the usual suspects Iran, Pakistan and the Taliban, many in the USA and around the world asked themselves the question, “What is Karzai up to?” After all, the US Government funneled nearly $100 billion in aid to Afghanistan through Karzai, not to mention the billions of dollars spent on our military effort to stabilize the country. How much of this money actually ended up in the hands of the people to better their lives and bring their society up to par with the rest of the world? How much of it never left Karzai’s pocket and his secret bank accounts in Turkey and the United Arab Emirates? Only Karzai and his fellow crooks may have the answer to those questions.

As a politician who is not running for office in presidential elections in April, Karzai feels he has to find himself a leadership position after the Americans leave. He naturally worries that America will side with Pakistan to decide who rules Afghanistan after the withdrawal. He does not trust Pakistan and wants to make sure the Taliban do not overrun his country. He has been receiving mixed signals from Washington. He had an explosive private meeting last month with Susan Rice, a national security advisor, and most importantly, President Obama does not talk to him! All this worries Karzai, or at least, he seems like he is worried. Yes, we know he may be a “despicable crook,” but as someone once said, “He is our despicable crook.” And our “despicable crook” after releasing 65 Taliban fighters from jail during a speech at a conference in the capital city of Ankara, Turkey said, “Washington should respect Afghanistan’s judicial authority! Afghanistan is a sovereign country. If the Afghan judicial authorities decide to release prisoners, it is of no concern to the U.S. and should be of no concern to the U.S.! I hope that the 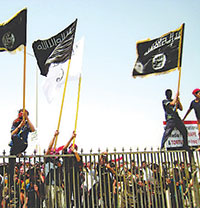 United States will stop harassing Afghanistan’s procedures and judicial authority.” That is what we get for “no-strings-attached-do-your-very-best-and-make-everything-better-U.S.-aid” to yet another “leader of a tribal country!”

Obviously, as an American, his words were hard to swallow for me. On the other hand, I thought that we must stop and take a serious look at our own policies of getting involved, with the best of intentions, in the affairs of tribal countries where Democracy is a four-letter word and the sun rotates around a flat world! World history is flush with stories of failed attempts by various world powers who tried to bring these countries into Western-style democracies or Eastern-style socialist regimes! As we think about the events surrounding Afghanistan and Iraq, we should never forget the ultimate sacrifices made by the more than 1,760 brave American men and women in uniform who went to Afghanistan and over 4,000 men and women who did the same in Iraq, as well as the billions of our hard earned dollars in Afghanistan. Most Iraqi war veterans who gave it their all must be sitting in front of their TV sets and watching in total disgust at Al Qaeda flags flying over the very cities they once liberated at great cost!

At this point in time, I am sure the entire world knows that as soon as the last Coalition Force member (which includes around 10,000 Americans) leaves this most dangerous place on earth Afghanistan will fall into chaos. Taliban will be back in full force, maybe this time facing a different foreign force in the form of China, which invested millions of dollars of their money into copper mines, minerals and infrastructure in Afghanistan. Our “despicable crook” Hamid Karzai will be living happily ever after in his villa in Dubai with his family and enjoying all the dollars we so “willingly” and “foolishly” sent to him.

I continue to ask myself the question “when will we ever learn?” We did not learn after spending billions of dollars in Palestine only to make the Palestinian leader Yasser Arafat a multi-millionaire with our hard earned dollars invested in his secret Swiss banks and other places where we can’t get to! As you are reading this article, we are probably making many more millionaires of dictators around the world, hoping they will turn their countries around, help their peoples advance and love us in the interim. The formula for them is simple: Ask Uncle Sam to come in and spend money and human treasure; prop their corrupt regime up; and then cut and run before the job is completed because the folks at home are getting restless, complaining about a protracted war with no victory in sight!

But what about us? The ever-loving, ever-giving, good-natured, well-educated, well-fed and well-intentioned Americans? When will we learn to tell those who want us to assist them in turning their miserable countries into western-style democracies before we deploy the first military personnel or load the first pallet of dollars on board the next aircraft, “Yes, we will come and help you, but there will be a heavy price to pay at the end if you choose not to assist us, pocket millions of our dollars or treat us like a bunch oppressors because you have now established yourself as the next dictator! If you co-operate with us and turn your countries into civilized democracies, we will be your best friends; if you do not, we will be your worst enemies, and we will make damn sure that you will not live another day to enjoy the dollars you stole from us.”