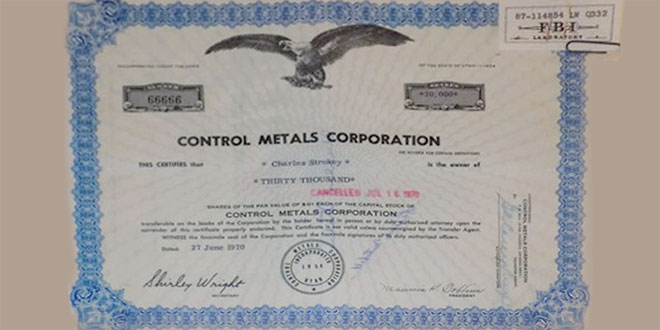 PHOTO BY BARRY GWINNStock certificate, back from the FBI lab after being treated for fingerprints, dated and initialed in the upper right hand corner when received from an informant. Hundreds of thousands of worthlessshares, par value of one cent, were sold for two to five cents apiece.

I arrived in the Phoenix FBI field office from New York in 1969. One year later I was immersed in white collar crime and was running down a couple of con men from Tampa who were peddling worthless Control Metals Corporation stock. The stock was coming through Phoenix via a stock transfer agency, run by an informant of mine. The con men had taken over a dormant Idaho shell corporation, printed up stock, and then made a market for it on an obscure stock exchange. When the market price rose (from one cent a share), the subjects printed up thousands more, sold them at a nice profit, and moved on to another scheme. By 1973, I had recovered enough of this stock, and interviewed enough duped buyers thereof, to present to a federal grand jury in Tampa. A trial date was set for November 1973. The Tampa United States Attorney requested that I come out to assist in the prosecution.

Delta Airlines was the most convenient to fly if you were traveling the southern tier of the U.S. I packed up all the reports and exhibits I had accumulated and boarded a Delta flight on a warm November day in 1973. After taking my seat in coach, as was my habit, I started studying my reports and interviews, so as to be able to better assist at trial. After the plane reached cruising altitude, a stewardess looked me up and conveyed a message from the captain. She knew what seat I was in because I had reported this at the boarding counter. Because of the numerous plane hijackings in the 60s and early 70s, Director Hoover had required that agents carry their loaded side arms on all flights, whether on duty or off, and to so notify the airline. Although Hoover was now dead, the directive still held. The captain, it turned out, was a big fan of the FBI. He was glad I was on board and wanted to show his appreciation. He offered me the third seat in the cockpit. Unfortunately, I was then immersed in familiarizing myself with all aspects of this case. Reports were on my lap, on the food tray, and on the floor under the seat. I would be meeting with the prosecutor that afternoon and wanted to be prepared. It was a glittering opportunity, but I sent my regrets and remained buried in reports. It was the last such invitation I would ever get.

My stay in Tampa was cut short when the defendants agreed to a plea bargain. They would plead to one conspiracy count. We had met with their attorneys who were impressed with the evidence we had amassed. They wanted no part of a trial. It was now Friday. I had been in Tampa for three days and wanted to get home. The best I could do was to book a return trip on Delta, by way of Chicago, leaving at 1 PM on Sunday, two days away. The thought crossed my mind that I might get another invite to the cockpit. As things turned out, I didn’t even get an invite to the aircraft.

On Sunday I arrived at airport at 11:30 AM. It was a warm, muggy day. I dutifully reported to the boarding desk that I was an FBI agent and that I was armed. I sat down to wait for boarding. It wasn’t long before a Delta attendant came over to me with some startling news. She reported that the captain was not going to let me board the plane. He had been involved somehow with a prior plane hijacking, wherein FBI agents shot the tires out of the aircraft on the tarmac. He wanted no part of the trigger happy FBI and would not allow me to board unless I relinquished my weapon to him. The helpful attendant suggested that I might want to get a later flight with a different captain. Neither option was viable. I had been in meetings all week and had had enough of Tampa. I did a lot of business travel anyway and just wanted to get home – now! I told her I had a ticket for this flight and that my orders were to board it with my loaded sidearm and get to my destination as soon as possible. “You had better get in touch with your general counsel,” I said, “I’m not going anywhere until I get on this plane.” Had I known then what the pilot knew I might have stayed another day and booked a flight on Monday. In any case, the other passengers boarded at 12:30 PM, leaving me alone in the boarding area.

I later learned that there was a previous hijacking in which FBI agents surrounded the plane on the tarmac and shot its tires out. It had happened about a year earlier in Orlando. Area newspapers picked up the story the next day. It quickly became national news. A review of the articles reflects a rather sensational case. On 11/10/72, two armed subjects hijacked Southern Airways Flight 49 shortly after takeoff from Birmingham, AL. They demanded $10M or they would force the plane to crash into the federal research nuclear reactor at Oak Ridge Tennessee. They actually had the plane circle over the facility until directed to Chattanooga where they picked up $2M which the airline had scraped up. After a refueling stop, it was on to Cuba, but Castro didn’t allow them to land. The plane was then directed back to McCoy Air Force Base in Orlando for another refueling. The FBI was waiting. After the agents shot the tires out, the subjects returned fire and dragged the co-pilot from the cockpit. In a struggle for the gun the co-pilot was shot in the arm. He reported that the gunman then put the pistol to his head, only to have the gun misfire when he pulled the trigger. Somehow the pilot and wounded co-pilot managed to take off (even with the flat tires) and return to Cuba. After landing on a foamed runway, Castro threw both in jail. All of this must have been going through the captain’s mind.

And so I sat. And sat. And sat. No one spoke to me. I could see the aircraft sitting in a blazing sun at the gate. It hadn’t moved. None of the passengers had deplaned. Nothing was happening. At about 3:30 PM an attendant came over and told me they had been unsuccessfully trying to reach their general counsel in New York. “Fine,” I said, “I’ll wait.” Now I wanted to get out of Tampa more than ever. I figured that their lawyer was out on a crisp fall New York afternoon playing golf. Finally, about 5:00 PM, the attendant came out and told me that I could now board the plane. “Our general counsel has instructed the pilot to let you on board,” she said, “You may of course retain your weapon.” I have always liked lawyers. Now I had reason to love them. No one will ever be able to convince me that we don’t need lawyers.

For whatever reason, the AC had not been turned on in the aircraft. The passengers were disheveled and sweating. They had been sitting there since 12:30. As I entered the plane, all eyes (including the stewardesses) were fastened on me as I came through the door. They knew! The eyes reflected deep hate and loathing, the kind of stare you would reserve for whale poop in the deepest part of the deepest ocean. I had to make my way through this gauntlet, all the way to the rear of the plane. You could have heard a mosquito land on the deck. My seat was directly across from the lavatory. Even the folks who got on in Chicago wouldn’t speak to me. They too must have known. The stewardesses avoided me like the plague for the entire trip. No invitation to sit in the cockpit was forthcoming. As I finally walked through Sky Harbor Airport in Phoenix, I breathed a big sigh of relief, knowing I had won one for Director Hoover.