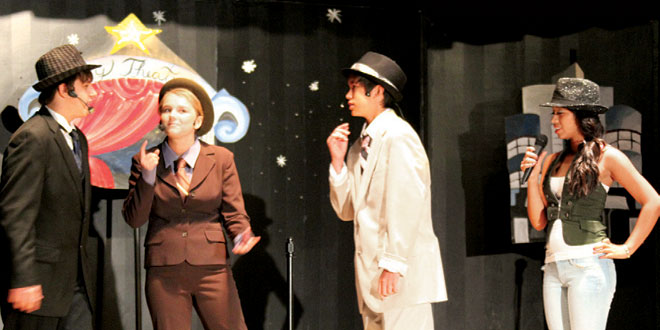 Marco Islanders did not have to travel to Broadway or even to The Phil to enjoy wonderful theater recently. All they had to do was attend the outstanding musical event, Guys & Dolls, performed by the talented students at Marco Island Charter Middle School on May 17.

Karen Raymond, in charge of MICMS Chorus and Performing Arts, coordinated the performance, with set decoration and props built by Margo Heidenreich and the Wheel Class, sound by Kurt August and back stage manager Mary Jo O’Regan. The creative sets and props provided the perfect imagery for the story line, especially the 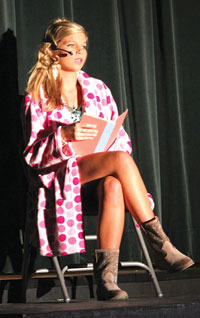 Mattie Zwerin as Miss Adelaide in a solo number.

Lead performers included Ethan Dorestin, Lorry lyn Sullivan, Mattie Zwerin and Max Rufatt. The voices of Ethan, as Sky Masterson and Lorry lyn, as Sarah Brown, were strong and clear as they set the scene for their budding romance. Mattie took on the role of Miss Adelaide and gave a charming and sympathetic performance. Max, as Nathan Detroit, struggling to evade Miss Adelaide and the police while trying to set up his crap games, brought humor and spark to his character. 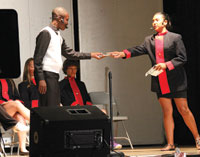 Sky and Sarah, a.k.a. Ethan Dorestin and Lorry Lyn Sullivan, begin their romance.

Kudos to Karen Raymond and her team for a great season of musical theater at MICMS. Special thanks to Marco Island Marriott and Larry Dulski, Park Maitland Country School and Belle Warren, Morningstar Music and Roger Raymond, American Pediatric and Surgical Nurses and Raquel Pasaron, Party to Go Rentals and Dawn Snyder.