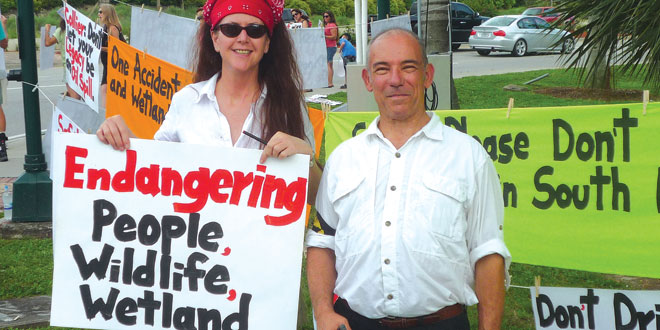 Residents of Golden Gate Estates are deeply concerned about the effects of oil drilling on their neighborhood as well as on protected wildlife habitats and wetlands. The proposed drill site is only 1,000 feet from family homes and is adjacent to the Florida Panther National Wildlife Refuge and the Western Everglades.

In May of 2013, Dan A. Hughes applied for permits to drill an exploratory oil well in Golden Gate Estates. Residents first learned about the proposed drill site when they received a letter from Total Safety asking them for contact information so they could be evacuated in case of an explosion, gas leak or other drilling disaster.

Alarmed, residents formed the group, Preserve Our Paradise, and attended meetings with Collier, Hughes, the Florida Department of Environmental Protection (DEP), commissioners, and legislators as well as hosted a variety of public actions—from town hall meetings to a house party for Senator Dwight Bullard who sent an official letter requesting the DEP deny the permit. The DEP has received over 600 public comments and 3,500 petition signatures, including comments from environmental groups such as South Florida Wildlands Association, the Conservancy of Southwest Florida, Food and Water Watch, and Sierra Club.

This dispute is about more than just one oil well. It is about the long line of wells Hughes plans to drill on the 115,000 acres it recently leased from Collier for oil operations. We’re deeply concerned about backyard oil drilling, but also about new oil drilling in the Western Everglades, one of the most ecologically diverse regions in the nation. The drill application is, in effect, a test case for those that will follow. It will set a precedent and therefore requires rigorous scrutiny by state and federal agencies, including impact studies and full biological reviews.

This is the first time in Collier an oil well will be drilled so close to family homes, and so deep – three miles – penetrating fresh water aquifers and the hydrogen sulfide zone. Hydrogen sulfide poses such a threat that the emergency-contingency-plan calls for gas masks, oxygen resuscitators, and the evacuation of residents; if flaring is uncontrollable, the plan calls for evacuating the rig and igniting it. No one should have to live in an emergency evacuation zone, only feet away from a hazardous, unsightly drill site and 145 foot oil rig.

Both oil and hydrogen sulfide are highly explosive. We have no fire hydrants and must rely on helicopters with buckets to put out fires. A burning oil well will be even more difficult to extinguish, requiring special chemicals. Response time, at best, is 15 minutes, says Fire Chief Sapp.

Desoto Blvd. is a two-lane country road with no sidewalks or bike paths where six times a day children wait for school buses. We don’t want a convoy of heavy trucks hauling in rigs, pipes, storage tanks, generators, fuel, trailers, and lime rock, placing our children at risk.

Residents worry their drinking water will become contaminated. They’re not alone. Andrew McElwaine, out-going President and CEO of the Conservancy warns that oil drilling on that land could contaminate the lower aquifer which serves as Collier County’s backup drinking water supply. “That’s our reserve drinking water,” he says. “You don’t want it to become an industrial cesspool.”

Water contamination is a major concern. We want to protect the aquifers that supply South Florida with its drinking water and safeguard the

watersheds that sustain our wetlands.

Accidents happen; and over time, pipes leak; and injected fluids surface. We want to save South Florida from another Deepwater Horizon—with its long chain of documented misjudgments, operational failings and oversight mistakes. One accident could ruin our aquifers and wetlands for generations to come. Oil drilling is not in the public interest.

Part of our water concern is the class II saltwater disposal well and so we’ve requested a Public Hearing from the U.S. Environmental Protection Agency. We don’t want to risk brine oil waste contamination. Recent studies show that injected fluids migrate and surface. Injecting drilling fluids into the boulder layer, especially in Florida’s highly porous limestone, is no longer a safe option.

Others fear the federally endangered Florida panther (approximately one hundred remaining) won’t survive further habitat loss. The Western Everglades south of the Caloosahatchee River is the only remaining home for the species that struggles to survive on only five percent of its former range. The drill site gets extensive use from panthers since it lies adjacent to the Panther Refuge. No amount of mitigation can offset the negative impact of losing more habitat. Once the Florida panther is extinct, we can’t call it back.

Property values are tied to our natural resources of water and wetlands, not to oil. Tourists come to Southwest Florida for the beach, wildlife, wetlands and natural beauty.

Collier oil will not put gas in your tank. Most of it goes overseas. Hughes will not hire many local workers. They will bring a skilled crew from Texas to work on the rig. And state and county tax revenues will be marginal, at best, given Florida’s tax breaks for the oil industry.

In short, as one of the richest cities in the nation, Naples doesn’t need oil drilling. And Naples doesn’t want it. The hazards are too great. Think of our environment, the Everglades, Fakahatchee Strand, Rookery Bay, Corkscrew Swamp, the Gulf of Mexico as well as our clean air and water.

Oil drilling is not safe. It’s not clean energy, and accidents do happen. We remember Deep Water Horizon and what it’s done to our Gulf of Mexico.

We don’t need private profits at public costs We don’t want Naples to be a sacrifice zone. We’re calling on the DEP to deny this permit based on risks to residents, water, wildlife, and wetlands. We’re asking everyone, from legislators to land barons, to partner with us in preserving South Florida.

PRESERVE OUR PARADISE Encourages
Everyone to Attend our Next Event:

We will meet on the beach at the Naples Fishing Pier then march together on the beach to the Governor’s beachfront home at 3150 Gordon Drive. Details are on the Preserve Our Paradise Facebook Page – no need to have Facebook, just Google search Preserve our Paradise.