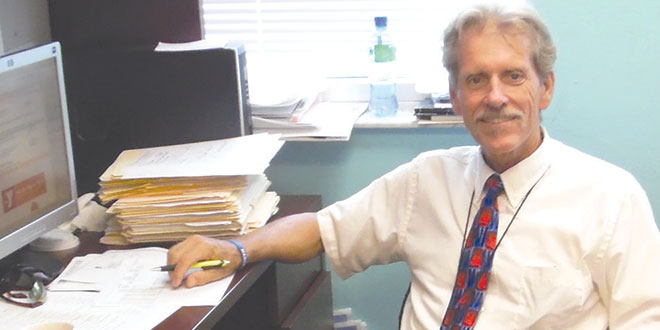 Roger Raymond at his desk. Raymond has been with MICMS since the beginning,formulating its sports program. PHOTOS BY ROGER LALONDE

Roger Raymond has stepped down as athletic director at the Marco Island Academy.

I have known Roger Raymond since we met when the Marco Island Charter Middle School (MICMS) was getting off the ground some 17 years ago.

His “aw shucks” straight ways caught me off guard when so many were playing it politically correct to get what turned out to be one of, if not the best, charter schools in Florida.

There were many key people who believed in the absolute need for the school. I would be remiss in not crediting all those who stepped up big time, but I was writing sports for the Marco Eagle when this once Indiana farm boy became the activities director.

He and I understood the value of academics and education as keys to developing these sixth through eighth graders. Selfishly, I was trying to make the Eagle the paper to turn to for sports coverage.

His wife Karen was, and is the school’s music director, putting together memorable programs year after year.

Under Raymond, MICMS developed one of the most complete athletic programs for middle schools in the county, if not the state. About the only program it didn’t have was swimming, capably handled by Kamal Farhat at the Marco Island Area Family YMCA.

Roger Raymond with members of the Poling family at the annual Sports Night. Each year, the family gives Raymond a photo album depicting the sports he oversees. From left: Mickey, MICMS Student Athlete of Year, sisters Ellie, Rosie, Student Athlete of the Year in 2013 and in front, Maggie.

and track. Even though small in numbers, they conquered Collier and Lee County schools.

“We can compete with anyone,” was often said by Raymond.

It has been five years and the student numbers at MIA have grown from 60 to more than 250.

An important aspect, as it is in any high school and college, is sports programming. In came Raymond.

As with MICMS basketball, Raymond took the reins of the first MIA basketball team. In its first season, the team played four varsity teams, losing three games. The next season, they were 12-13, then 13-12 and 16-7, garnering a Class 2A district title.

With the growth of sports programs and other activities scheduled at both schools, Raymond felt the pinch.

Then, on his daily run that he had done for 3,954 consecutive days, Raymond broke his femur in two places while trying to avoid a car, on September 12, 2013.

“Kelly was there [at his home] every day and Maureen Marcoux, assistant middle school principal, did an outstanding job in scheduling for the middle school,” Raymond said.

Between the two schools, Raymond was everywhere, attending MIA district sports meetings, same for all charter sports, along with other school 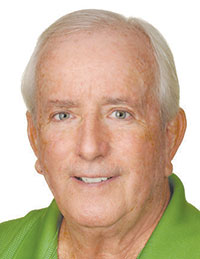 “It all just became more intense,” Raymond said. “As the school [MIA] grew I knew changes needed to be made. Kelly is there every day [while Raymond is at MICMS]. Kelly can give that personal attention and is capable of doing a very good job.”

Watt knows well what Raymond has meant to MIA.

“There is an entire chapter in my book, Fighting for Kids, dedicated to Roger Raymond and the legacy he leaves behind at MIA,” Watt said.

“It has been an honor and a privilege to work with him for the past four years. His positive attitude and willingness to do whatever needs done helped define MIA’s athletic program. Most importantly, he has dedicated his life to serving children. He inspired me in many ways and I will miss working with him. However, he has built a strong foundation for MIA’s athletic program. I am confident that Ms. Kelly Monnot, MIA’s new athletic director, will continue to move MIA’s athletic program onward and upward.”

Raymond said, “When it began it was a benefit to the school for me to be there as I knew so many ADs [athletic directors] at other high schools,” Raymond said. “Schools like Naples, Golden Gate, Seacrest, Gulf Coast, they agreed to play our teams. They had nothing to gain, but they all understood that it was about the kids.”

“For me, it will always be about the kids.”