Guarding Our Planet – Are We in Trouble? 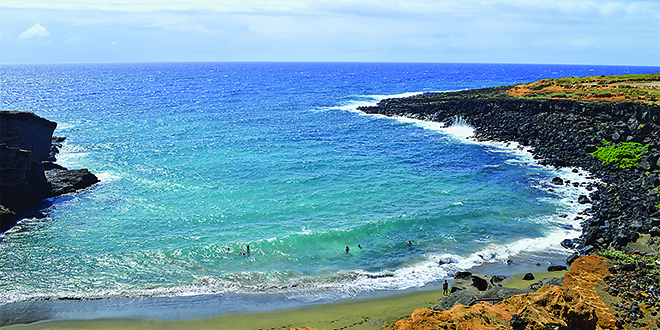 Photos by Bob McConville:The Green Sand Beach on the Big Island of Hawaii may not be there in a decade because of rising water levels.

I am worried, truly worried, about the future. For generations our ancestors have been on a mission to provide food, clothing and shelter for their families and to create a world that offers bigger and better options for all of us to enjoy. While all of that was good and necessary to improve our life choices, maybe a handful of people really understood what the long-term results might produce. The obvious result is that we have continually taken resources from our planet that it is now a major concern.

Early natives of North America grew their population to an estimated five to ten million, depending on the source you choose to believe. The sustainability of humans was great. There was more land and resources than people. When the “New World” was inhabited in the early 1500s, diseases were introduced to the natives and destroyed an estimated 90% of that civilization. Today, the handful of newcomers has increased to an amazing 325 million people, and that number has doubled since 1950!

So how did we adequately supply this number of humans with the necessities of life? It’s an amazing question, but we are here because we did so. The larger question is, at what cost to our surroundings?

Staying close to home, let’s look at the State of Florida. When Florida became a state in 1845 the population was approximately 60,000. Today we are over 20 million. In order to sustain that number of people we’ve had to provide roads, homes, food and other resources. While the majority of locals prefer the coastlines, more resourceful entrepreneurs discovered the value of the center of the state to provide necessities.

During the Seminole Wars a body of water was found, and the lush lands on its south side were industrialized for the purposes of producing sugar, citrus and cattle. Lake Okeechobee was no longer a secret. Rivers and streams from the north emptied their contents here to provide settlers a brand new opportunity.

However, the historical overflow from Lake 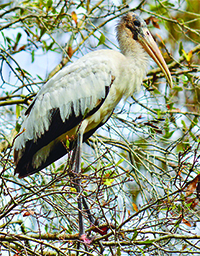 Sadly, because of habitat loss, more wood storks may be seen along Collier Boulevard than in the wild.

“O” that produced what we call the Everglades was redirected to allow these farmers the ability to survive. That flow created a magnificent wonderland for native plants and animals that depended on a continual stream of fresh water until “we” came along. Since then, more than 50% of the Everglades as it used to be is gone.

But there is hope. The Comprehensive Everglades Restoration Plan (CERP) came to life in 2000. This ten billion dollar, 35-year program is hoping to retard the loss of additional native habitat. By raising roads and creating new canals there is a chance that favorable changes can take place. The Everglades will never be restored to what it used to be, but salvaging the remaining paradise seems realistic.

However, so many species of plants and animals have been negatively affected that some non-native plants have taken control and some animals have migrated from the area or are now endangered. This is not just a Florida problem, but a worldwide issue.

Conservationist Joel Sartore is traveling the globe to take photos of the endangered species of our planet before they are gone. Some scientists say that we are now in the sixth mass extinction of plants and animals since the beginning of time. Although this is natural, with a normal rate of loss being five species per year, we are currently losing dozens of plants and animals per day! Thirty percent of all species known to us today could be gone by mid century! It’s an epidemic caused by man, not be the natural order of things.

We are, without a doubt, the planet’s dominant animals.

If nature does not equip us with the ability to protect ourselves against a predator, we can invent it. We will not be denied our quest to remain at the top of the list. But will we be smart enough, and quick enough, to learn that we must make some adjustments before we completely destroy what we have been given in order to reach this level? Only time will tell…are we in trouble?

Bob is the owner of Stepping Stone Ecotours, providing educational walks in the Big Cypress National Preserve. He is also a member of the Florida Society for Ethical Ecotourism. His popular book “Beyond The Mangrove Trees” is available at local stores. Bob loves his wife very much!