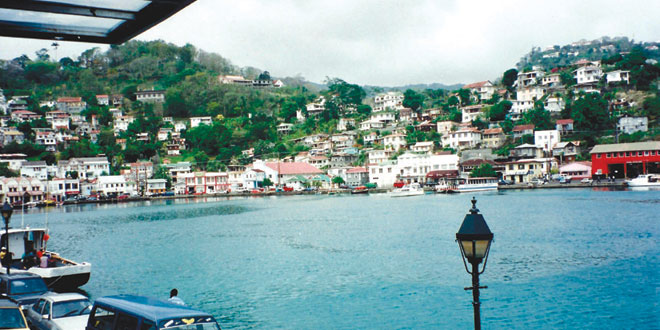 We left the Grenadines and sailed directly to Tyrell Bay, Carriacou which is an island that belongs to Grenada. Because it was still rolley here, we only stayed one night. We were anxious to get to Grenada and took advantage of a weather window which opened up and we sailed to Prickly Bay, Grenada. This was another of those harbors that we had heard so much about. We were rather disappointed by what we saw there. We had to sail here as this was where customs and immigration were located. The anchorage itself was exposed and a surge was running causing boats to roll rather uncomfortably. Secondly, the water was very deep. We anchored in 38 feet. There was a bar and restaurant, mini mart, and Spice Island Marine. Please keep in mind that this was how it was when we were there 17 years ago. That being said, I understand from more current cruisers, not much has changed as far as sailboats are concerned.

We left the next day for Secret Harbor in Mt. Hartman Bay on the SW coast. This was a jewel of an anchorage tucked away and is well protected from both wind and sea. Here too, there were not many facilities just The Rum Squall Bar, 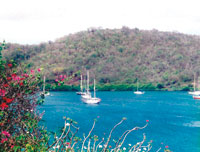 the Moorings office, and a very nice restaurant which was part of The Secret Harbor Resort. At that time the Moorings was most accommodating. They served as a mail drop, fax drop, laundry pick up service and more. The reason I mention laundry is because at that time there were no coin Laundromats in many of these smaller places. The only way to do laundry was through a service.

Getting around was not easy. From either Prickly Bay or Secret Harbor we had to walk a long distance up and down steep hills in blazing hot sun for about 1 and a half to two miles just to get the bus to town. Most of the time we hitched a ride to the bus stop. Local people were friendly and helpful. The buses were another experience in themselves. They were really maxi vans which came barreling down the city streets about 50 mph. There was a “conductor” who would be hanging partially out of the open door. He ushers you in while the bus was sometimes still rolling. Then, they took off again swaying side to side as the driver played “chicken” with the pedestrians.

Many times I was waiting for the van to tip over because of the one sided weight distribution. All the 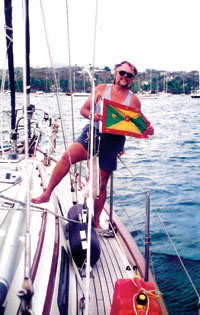 Herman raising the flag of Grenada.

time there was LOUD music, (I use the term loosely), blaring through boom box speakers. We wouldn’t have missed this experience for anything. It’s the closest thing to riding a roller coaster and not leaving the ground, although I’m sure the four wheels left the ground a few times as we flew over huge potholes. Clint Eastwood where were you? This would make an entertaining sequence for a Dirty Harry chase scene.

One of the more pleasant moments here was meeting up with the son of sailing friends of ours from home. Their son was a medical student at St George’s University in Grenada. We called him as soon as we got to Secret Harbor. He surprised us and came right over. We had a short, but pleasant, visit with him as he had a final exam the next day and had to study. We also ran into other sailors we knew from up north as well as sailors we met along the way.

One of the more moving moments we had was spent talking to a very lovely, elderly, local, black lady who gave us a ride to the Venezuelan Embassy. She was 85 and still driving a stick shift car. Herm had all he could do to control himself and not insist that 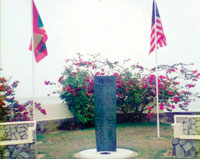 Memorial to Americans who fought for Grenada.

he drive. She would virtually stop in the middle of the road if she was talking. Anyway, she told us how grateful she was when the United States intervened in Grenada in 1983. She said that prior to the invasion of Grenada, she had only six days to live before she would be executed. The communists here declared people over 55 as useless and a burden on the government. Therefore, they were to be exterminated. She was not the only one who told us how terrible things were and how grateful they still are to the USA. We later took a tour and even our taxi driver had crossed flags hanging from his mirror-one for Grenada and one for USA. We never really realized how important this was to the people’s freedom here. This was not the only story we heard about USA and Grenada. We both were in awe of these people and their fondness and respect for America and their citizens. There are other stories about this as well, but I must move on. We both felt proud of our country and truly in awe of the love and respect shone to us while we were visiting their country.

As much as we enjoyed Grenada, it was time for us to move on to our next destination… Trinidad.