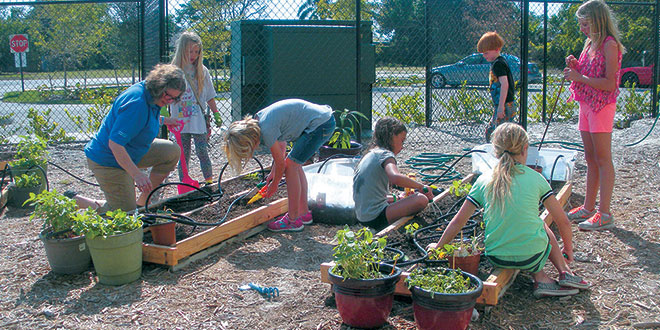 Photos by Don ManleyDonna Hardy Johnston (left) and children from the YMCA after school program care for the garden.

Anticipation is in the air among the children in the Greater Marco Family YMCA’s after school program.

The object of their preoccupation can be found outside the rear doors of the Y’s youth development center and a few steps away on the right, where the youths are receiving first-hand experience in growing food, as part of the Y’s new Green Thumb program.

Green Thumb is part of the nutrition education portion of the Y’s after-school program in which the children plant seeds and seedlings to raise fruits, vegetables and herbs that when ripe, will be used in preparing healthy snacks and meals in the youth development center’s Publix Super Market kitchen.

The youths have planted lettuce, radishes, onions, parsley, thyme, tomatoes, pumpkins, eggplant, watermelons, sunflowers and two mango trees. The plantings were started in pots and now “they’re starting to transfer those plants into raised beds on the south side of the youth development center,” said Donna Hardy Johnston, the Y’s grants coordinator, who is overseeing the project.

Green Thumb has also been introduced in the after-school programs the Y operates at Manatee, Parkside and Lely elementary schools, and will also be part of the Y’s summer camps.

“Our vision is by fall, we will have the logistics all in place to have not just the plantings at the school sites, but to bus the kids in for exciting things, such as planting their own beds here at the youth development center and then preparing the food we grow in our instructional kitchen and then eating it,” Johnston added.

The seedlings, seeds and some gardening tools were provided by Lipman Produce’s Jaime Weisinger, who is part of the task force that designed Green Thumb, along with representatives from the University of Florida’s Family Nutrition Program, the Calusa Garden Club of Marco Island, the Naples Botanical Garden, the Naples Garden Club, and Michelle Finnegan of Essential Art Books, who is a master gardener.

“These are all gardening people who are outstanding,” said Johnston, who describes herself as “just a backyard gardener,” although her grandfather was a farmer in Ohio and her youngest brother is following in his

Donna Hardy Johnston, Kaylie Young (left), Tebow Morris and Hailey Creek tend to one portion of the garden at the Marco YMCA.

Stephanie Pepper, the Y’s youth development manager, said the Family Nutrition Center is taking the lead in bringing the classroom-based nutrition program it designed into summer and after school programs.

Pepper and Johnston said that as with any new program, there’s a learn-as-you-go process to determine what works best and Green Thumb is no different.

“This is just the beginning,” said Pepper.

Future plans call for such additions as espalier, training the branches of fruit trees and ornamental shrubs to grow flat against a fence or wall, and butterfly gardens, as well as presentations about bees by Ray Portu, a beekeeper on Marco Island.

“The garden really provides a hands-on, creative aspect to the health and nutrition program,” said Johnston. “It pulls in a bit of history as they learn what grows well in Southwest Florida and that includes landscapes and soil, and a bit of topology. There’s also math involved, learning planting distance, what to expect from their harvest, rainfall. We hope to start composting by next fall, even learning about drainage. Science is in there too; soil testing, weather patterns. It’s just an incredible amount of information for the kids and they’re learning hands-on.”

She said gardening tools, gloves, aprons and a wheelbarrow for Green Thumb were donated by John Ritchie, a former member of the Y’s board of directors, and Walmart also provided some seeds for the program.

Volunteers with an interest and background in gardening are also being sought. “We’re always looking for volunteers who can come for one or two hours a week to help the kids,” said Johnston.