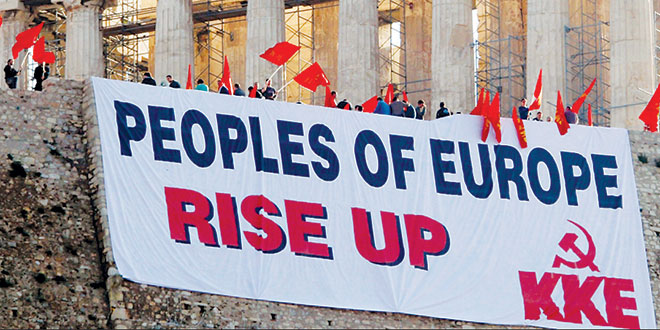 Most of us grew up with our parents constantly and vigorously advising us NOT to borrow money, live within our means, spend only what you need to and save the rest; and if you have to borrow money, make sure you pay it back as soon as you possibly can.

Even though I am pretty sure the same advice was doled out to our contemporaries; this may not have been the case in modern Greece. Over the years, various Greek governments adopted socialist principals, borrowed and spent money lavishly, passed laws to let people retire between the ages of 45 to 61; allowed politicians to use civil services and other public sector agencies to exchange political favors for votes and influence; not checked the rise of unemployment which contributed to national poverty while putting stress on an already struggling welfare system. Further making things worse were the stubbornness of the Greek politicians and their “we can fix our problems our way” attitudes; policies of the very strong labor unions whose leaderships demanded ever increasing pensions for their members and actually paying outrageous amounts to pensioners, even to dead people until they were weeded out by law in 2012; and in effect discouraging hard work and encouraging the population to live way above their means off of the government. Very few citizens paid their taxes and those who did paid very little. As a result, at the end of the day on June 30, 2015 Greece’s latest bailout expired when Greece missed a $ 1.6 Billion payment to the IMF and the Greek government defaulted.

Greece wasn’t in a crisis until after the global economy melted down in 2007 and 2008. As things got worse, Government spent more money. The spending put money in people’s pockets and paid for a safety net for the most vulnerable, but it also added to governments’ debts. Most European countries were able to keep their financial situations in check; but other European countries nearly defaulted. Unfortunately, Greece was in the worst position of all. The European Commission, one of the creditors along with the IMF and the European Central Bank wanted the government in Athens to raise taxes and slash welfare spending to meet its debt obligations. Instead the present Greek government led by the Socialist Prime Minister Alexis Tsipras refused to negotiate a deal with the creditors and his Finance Minister, Yanis Varoufakis, called the eurozone’s strategy “terrorism!” which may 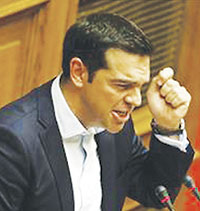 make it hard to bring everyone back to the table after all.

As a last resort, the Socialist Prime Minister asked for a nationwide referendum and asked the Greek people to vote “yes” or “no” to the demands of the creditors. Obviously, by resorting to this unusual referendum, the government of Tsipras tried to shed its financial responsibility and obligations to lead the nation and in effect threw the country and possibly the rest of the Eurozone into financial turmoil. Prime Minister Tsipras appealed to the “nationalist” feelings of the Greek people and urged them to vote “NO” on today’s referendum ballot. Today, Sunday July 5, 2015 at 10 PM the vote is in and the Greek people overwhelmingly voted “no” to accepting the creditors terms to re-negotiate the debt and impose austerity measures on them. It looks like the Prime Minister got exactly what he wanted. The question is what the creditors will think and do about this situation? The Greek government’s opponents and some Greek voters had complained that the question on the ballot paper was unclear while the EU officials said it applied to the terms of an offer that was no longer on the table.

Without another rescue it is certain that there will be economic calamity in Greece. Banks will run out of money, seniors will not get their pensions, and unemployment will worsen and go up to 25%. This all may result in Greece leaving the Eurozone. That means a risk, if only a small one, that Spain and Portugal might leave the Euro after Greece.

The result of Greece leaving the euro could be massive capital flight out of all the Mediterranean countries, crippling them and their banks for possibly decades to come. And maybe spelling the end of the entire European Union.

“Without new money, salaries won’t be paid, the health system will stop functioning, the power network and public transport will break down, and they won’t be able to import vital goods because nobody can pay” said Martin Schulz, the president of the European parliament “therefore the stakes are very high.”

Having already missed a

Happiness in the streets of Athens

payment to the International Monetary fund last week the next important day is July 20 when Greece must repay €3.5 billion ($ 3.8 billion) to the European Central Bank. This actually may be the final deadline according to high ranking officials at Bank of America Merrill Lynch. If they missed that payment, “It would then be very difficult to repair the relationship between Athens and the Europeans, at least under the current political configuration in Greece.”

What does that mean?

According to Deutche Bank’s analysis, one potential scenario is that Tsipras’s Syriza government is replaced with one of national unity government to enable a new deal to be made with creditors. According to those who study such matters, in the absence of that, Greece may definitely exit the Eurozone.

Late tonight, the Greek Finance Minister announced that he was “on a war footing.” I guess one can interpret that to mean Greece will continue to fight this out. Negotiations shall begin Tuesday morning, after I have submitted this piece to the Coastal Breeze News. Where they may go from there is anybody’s guess. At the end of the day, we must all ask ourselves to look deeply into this matter and then compare it to the situation the United States may be facing sooner than later.

What makes the USA different from Greece is the fact that the the US economy is much larger than the Greek economy. And of course, USA has the ability to print Dollars. Greece does not. However, one should remember that the national debt now stands at $ 18 Trillion Dollars and it is projected to exceed $ 20 Trillion Dollars by the end of 2016, when the present Administration exits. Today, approximately 47 percent of the population is on one type of government subsidy or another. Even though the unemployment rate is 5.3 percent; the most important “labor participation rate” is the lowest in 38 years glaring at us at 60 percent. Economic growth is very slow, hovering around 1.9 percent. Things don’t look so great.

It is now obvious to those who are in the know that the day of reckoning is nearer than ever for us here in the USA. The next government regardless of its stripes will be faced with very tough choices regarding cuts in services and entitlements, reducing the size of the government, imposing higher taxes across the board and most definitely imposing some austerity measures.

Watch what happens in Greece closely.