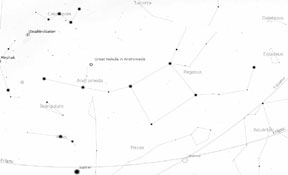 Tonight the Great Nebula in Andromeda, also known as the Andromeda Galaxy, is near the zenith. This is the best time to catch a naked eye glimpse of 200 billion stars. Viewing the Andromeda Galaxy is easy from a dark sky site, but is rather elusive from suburban skies. This could be your chance however as the sky is darkest at the zenith – right where the galaxy happens to be now. Look for a bit of fog just to the north of the middle star in the constellation of Andromeda. As the Moon is nearly full it might be better to wait a week to try.

Early in the 20th century the Great Nebula in Andromeda proved to be of major importance in improving man’s understanding of the universe. Astronomers were divided into two camps that vigorously disagreed with one another – those that believed the Nebula was just a cloud of gas condensing into a single star and thus relatively close by or those that believed it was a vast grouping of stars and perhaps millions of light years away. Evidence for both sides was rather scanty at best; but evidence for a vast grouping of stars was slowly accumulating. Proof was finally provided by the then new 100 inch telescope on Mount Wilson; it took a photo and resolved the Nebula into millions of stars.

Nearby the Great Nebula, lying halfway between Perseus and Cassiopeia lies the famous Double Cluster. These two clusters are not particularly close to one another in reality however, but merely lie along the same line of sight from Earth. Through your binoculars they will look like two bits of fog almost touching. A minor mystery concerning the clusters is why Messier never put them on his list of comet lookalikes; they look more like comets than others on his list – the Pleiades for example.

On November 17th and 18th look at Leo after midnight to catch one of the most reliable meteor showers of the year, the Leonids. About 40 meteors an hour are common. To find Leo, locate the pointer stars in the Big Dipper and move your gaze away from the north about the same distance Polaris is in the other direction. Exact precision in locating Leo is not that important.

After sunset you should be able to catch Venus shining low in the west. Later this year it will put on a better show as it becomes brighter and nears the Earth.