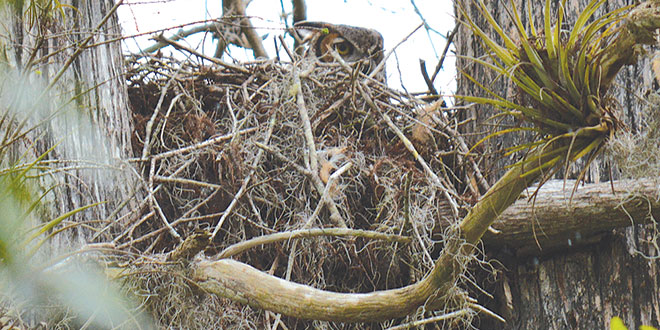 This Great Horned Owl watches from its nest in Big Cypress Swamp. PHOTOS BY BOB MCCONVILLE

Raptors…birds of prey. When we think of some of the major hunting birds in South Florida, there are a few that always come to mind. Naturally, everyone watches when a majestic bald eagle soars overhead. Red-shouldered hawks, vultures, ospreys, peregrine falcons and other such creatures also make the grade. One of the fiercest hunters in the area usually misses most top 10 lists — the great horned owl.

One of the most common owls in our country, the great horned owl’s range covers most of North and South America, including an active nest in the Big Cypress Swamp.

They are easily recognized by the feathered tufts on its head, called “plumicorns,” which resemble horns. They also have earned the nickname “cat owl” because these tufts resemble cat ears, but in fact, these feathers are not horns and have nothing to do with hearing ability. As the owl blends in with the surrounding branches, these tufts help to camouflage the animal. When the tufts are upright, like ears, it is thought that the owl is inquisitive, and they fall flat when it is irritated.

These hunters are active from dusk until dawn. Utilizing excellent eyesight and listening skills, they strike their prey from above.

Extremely sharp and powerful talons (claws) extinguish life from the victim very quickly primarily by breaking the spine. With soft wing feathers, the owl will silently swoop down on the prey. Size seems to matter little, as this owl can grasp and carry a victim nearly three times its own bodyweight. Their primary diet is not so primary. They will feed on amphibians, reptiles, mammals and even other owls. Although the beaks and talons are built for ripping and shredding, the great horned owl will sometimes swallow their victims whole and then regurgitate the feathers and bones.

Nesting season for these large raptors is January and February. The male and female do not build their own nest but will make use of an existing nest formally utilized by hawks, eagles and herons. The owl, pictured here in the Big Cypress area, took over the nest of a red-shouldered hawk.

The female will usually lay one to five eggs with two being the typical number. Both the male and female will incubate the eggs while the male will also do the hunting for food. Once the young are born, both parents are extremely protective of the nest and have even been known to attack humans that stray too close. The incubation period averages 30-35 days, and the juveniles will take flight after 10-13 weeks.These adult pairs remain monogamous.

Standing approximately two feet tall with a wingspan reaching nearly five feet in width, they are a large, silent, deadly force in their habitat. Since she carries the eggs, the female is usually larger than her male partner. The great horned owl can live as long as 28 years in the wild, but the average lifespan is about 15 years.

They have huge yellow eyes, as large as a human eye and great sight, but the eyes are stationary, which means they have “binocular” vision. In order to detect their surroundings, the owl must swivel its head and can do so more than 240 degrees.

And so we have another fascinating creature in our midst. Life in the Big Cypress and the Everglades is astounding, a never-ending outdoor classroom for those who choose to attend its schools. To see many of these magnificent species, you just need to drive 30 minutes from Marco Island.

Once again I encourage everyone, and I mean this with the utmost respect….Go take a hike!

Bob is the owner of Stepping Stone Ecotours and is a naturalist for the dolphin survey team on board The Dolphin Explorer. He is a member of Florida SEE (Society for Ethical Ecotourism). Bob loves his wife very much!