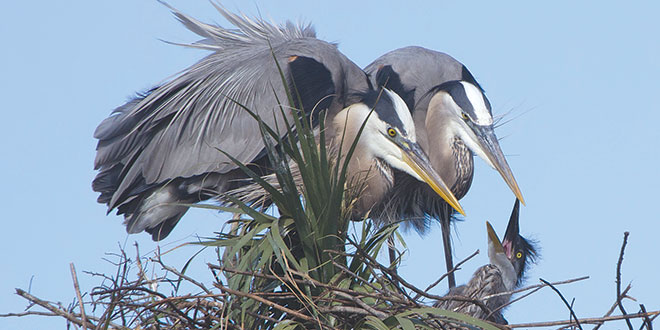 They are tall, elegant and intensely avian. Like magnificently feathered ballerinas, Great Blue Heron, Great White Heron and the Great Egret magically grace many Southwest Florida habitats: the beach, back bay, mudflat and mangroves. And if a regular fisherman, one of these water birds hanging around the dock begging for bait is not uncommon. (Note: Please do not feed wildlife!)

These three large species of wading birds are very similar. The most obvious is their stature. They are all so big; they certainly have earned their title of “grea.” That is about as simple as it gets, though.

The Great Blue Heron (Ardea herodias) was first described by Carolus Linnaeus in the 18th century in his volume “Systemea Naturae,” 1758, and illustrated by John James Audubon in the second edition of “Birds of America,” 1827 (Plate 161). With a head-to-tail length up to 54 inches, a height up to 54 inches, wingspan up to 79 inches and weight reaching close to eight pounds, the Great Blue is the largest heron in North America. The very long, pointed sharp bill is grayish yellow and lower legs gray — all turning an orange color briefly in 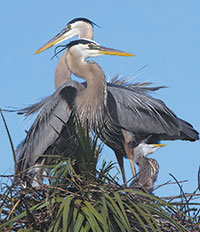 breeding season. Its body is slate gray with rusty red upper legs. Below the pale head and almost all white face is a gray neck with a black and white streaking down the front. Black plumes running from atop the eyes to the back of the head give this bird a dramatic, serious look. The plumes at the base of the neck and along its back are long and “dressy,” getting more decorative in breeding season. When in full breeding plumage, this great, big, beautiful bird is spectacular.

Here is where it is not so simple. In the past, the “white morph” (meaning the total lack of pigment in the plumage) of the Great Blue Heron was thought to be a completely separate species, and commonly called the Great White Heron (Ardea herodias occidentalis). It is the same large size and shares the same behaviors and habitats, but this “white morph,” the Great White Heron, is now considered a subspecies. Still, there is support from ornithologists that it could be its own species, due to its different bill morphology and head plume lengths as compared to those of the Great Blue. Regardless of this dispute of 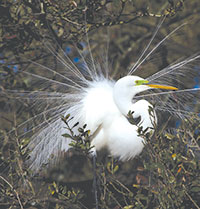 taxonomy, it is fortunate that the Great White Heron — sub species or truly its own species — is only found in South Florida and the Caribbean for our enjoyment.

One more big, beautiful bird that earns the great title is the Great Egret. Don’t confuse this with the subspecies, “white morph” Great White Heron, though. All white plumage, the Great Egret (Ardea alba) is large but smaller and sleeker in stature than the herons, with a very bright yellow-orange bill and black legs. (So, if you see black legs on a big white bird, it is a Great Egret, not the Great White Heron…simple, right?!) From head to tail, it can be 41 inches with a height up to 39 inches. Weighing less than half of what the herons do, the wingspan is still impressive and can reach 67 inches. When in breeding plumage, the Great Egret looks spectacular. The plume hunters of the 18th century almost annihilated this species while collecting these feathers for ladies’ hat adornments. This unnecessary carnage brought about the first conservation movements in this country, and laws to protect birds were passed that still are in affect today. Consequently, in

1953, the National Audubon Society was formed to prevent the killing of birds for plumes and chose, very fittingly, the Great Egret as its symbol.

Look for all three of these great, big, beautiful birds in and around Marco Island. Commonly seen flying overhead gracefully or standing in a yard, they can also be seen singularly standing along water bodies, like statues, then slowly stalking and wading through the water for their next meal of small fish, crayfish or crustacean. Using their large pointed bills as spears, they jab their prey and are all excellent hunters. While they hunt alone, they do roost and nest in colonies in isolated mangrove islands, such as the ABC Islands in the Marco River, away from predators of their eggs and young, such as raccoons. At sunrise or sunset, to see them in flight as they leave and return to their rookery is quite an amazing sight and one, hopefully, which South Florida will always have.

For more information on shore and wading birds and their habitats in south Florida, please contact Nancy Richie at 239-389-5003 or nrichie@cityofmarcoisland.com.