Graze Your Way Around the World 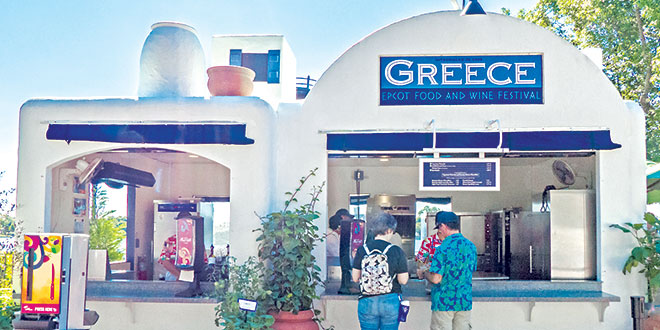 Before settling in for the heat and humidity of summer in Florida, think about planning an activity for the more temperate weather of fall.

Epcot’s International Food and Wine Festival in Orlando will take place September 25-November 16, 2015. Featuring foods from around the world, this year will be the 20th for this annual event. If you have never been to Epcot or are an Epcot fan and don’t have an opportunity to frequent a lot of ethnic restaurants, you might want to plan a visit. With the exception of Columbus Day weekend, this is a good time of year to see Epcot. The weather is cooler and the crowds not as bad as other times of the year. I went the third week in October last year, and it was lovely. We started the morning wearing jackets, shed them during the day, and needed them again for the evening concert, libations, and fireworks.

In addition to the usual diverse restaurants at Epcot, booths, called marketplaces, are set up around the World Showcase enabling a leisurely stroll from one to another trolling for food. Booths have both food and beverages (including wine and beer); many include desserts. All of the items, of course, have to be purchased and these appetizer sized portions typically range from $2 to $12. At Australia’s Marketplace which featured garlic shrimp and roasted tomatoes, the person in front of me complained about the number of shrimp she received. The worker had to remind her that all of the offerings at the Festival are considered “small plates”.

There are special free events throughout the day including evening Eat to the Beat concerts featuring music from the 70s to the 90s at an outdoor stage. Last year, some of the artists were Jo Dee Messina, The Commodores, Christopher Cross, Air Supply, Sister Hazel, Billy Ocean, Boyz II Men; we were there for Jim Brickman. Most of the performers are announced well in advance, but some not until close to the performance dates. Seating is usually available, but if there is a particularly popular entertainer, guests can line up early, receive a wristband, and go back to eating until the designated time.

There are demonstrations from professional chefs four times a day in the Welcome Center where samples of Ghiradelli chocolate were also available. Some additional culinary demonstrations and seminars cost extra. There are premium dining experiences that can be purchased ranging from events such as the $55 five course Mediterranean Food and Wine Pairing at the Morocco building to the $295 five course Italian White Truffle

and Wine Pairing dinner. For anyone interested in a special dining experience, it is best to do some research in advance as some have a dress code such as last year’s no shorts rule for the Party for the Senses which included acts from Cirque de Soleil. There are celebrity chef events including book signings and meet and greets. There are also wine, mixology, and cheese seminars.

In planning our visit, I researched the marketplace selections ahead of time and had a list of items I thought I might want to try. My list included a combination of some of my favorite foods and some that I wanted to try for the first time. Many were familiar such as mahi mahi or salmon, but prepared in a way archetypal of a particular country.

One problem at the Food and Wine Festival is a lack of places to sit and enjoy the food. Some of the booths have stand up tables to the side and of course there are always benches. We found only one place, adjacent to Brazil, that offered a patio with tables and chairs. There also was some seating near the African Outpost area. All this means that is good to be hands free. Shoulder bags or backpacks are recommended.

Visitors can pay for their food purchases with cash, credit card or a prepaid gift card. The prepaid gift card is convenient as it can be worn around the wrist and easily accessed for payment.

There were some marketplaces that did have lines, but the lines moved rather quickly. Typically, visitors order and pay for their items and are given a receipt to take to another window to pick up their food/beverage. On busy days, I’ve been told, the wait can take up to 30 minutes. Not one to wait in lines for food, I was glad I didn’t have to stand any more than a minute or two.

Sponsored by Chase last year, there was a Chase Lounge, accessible only to Chase credit/debit card holders and their guests. Above the American Adventure Pavilion, it provided somewhat of a respite with seating, air conditioning, complimentary Coca Cola products, and a phone charging station. Chase has a multi year sponsorship for this festival, and the Lounge will be available again this year.

One booth last year, Terra, served solely vegan foods. About two dozen of the booths offered some vegetarian and/or gluten free options. Disney publishes a listing of the foods, by country on their website and in their Marketplace Discovery Passport with those options noted. The Passport also has information 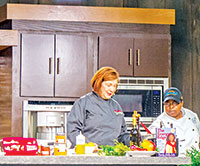 A cooking demonstration by Pam Smith author of The Energy Edge.

about the concerts and shopping opportunities and is available at the information and festival centers, as well as most marketplaces.

On the path chosen by my friends and I as we traversed the park, Greece was one of the first kiosks encountered. I was glad, because two of their items, chicken gyro with Tzatziki and spanakopita, were on my list. Very familiar dishes to me, the gyro was good, the spanakopita not so.

I tried Brazil’s Mocequa de Pescado, tilapia with coconut lime sauce and steamed rice, as well as pao de queijo (cheese bread) but avoided their crispy pork belly with black beans, onions, avocado and cilantro, and the cocados (coconut candy). I was disappointed with their frozen caipirinha, a muddled lime and rum drink. I also passed on the Polish Marketplace with its sauerkraut pierogies and pork goulash, as well as New Zealand’s venison sausage with pickled mushrooms, baby arugula, and black currant reduction and Scotland’s vegetarian haggis with neeps and tatties (rutabaga and mashed potatoes).

Australia’s Pavlova, a merinque shell with berries and vanilla custard, was wonderful, but difficult to eat seated on a bench. The baklava from Morocco was one of the best I ever tasted. All of China and Japan’s choices intrigued me and I decided on the Japanese Spicy Hand Roll, tuna and salmon with Kazan volcano sauce. It was so good, I went back for a second one. There was a wide selection of wine and beers; alas, I sampled none of them.

Epcot reminds me (and many others) of a world’s fair. During the festival, we used our time between grazing to revisit favorite “pavilions”, catch some I’d missed before, see those that have been updated and, of course, shop. Much of Epcot is a shopping mall.

Fast passes are available for the more popular attractions. If has been a few years since you visited Epcot, the Fast Pass system has changed drastically. Now called the Fast Pass+, I found it much more involved and confusing than the old system. I’m not even going to attempt to explain it. For anyone interested, my advice is to research it online before your visit on the Disney World website.