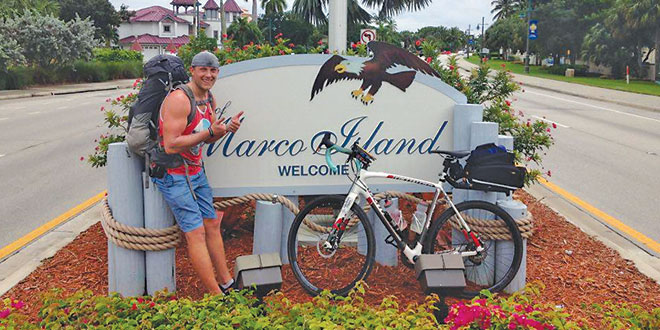 After a month long journey and 3,000 miles, Grant finally made it back to Marco Island. SUBMITTED PHOTOS

On November 1, Grant Bergsma began his month long, 3,000-mile bike ride from San Diego, California to Marco Island. His goal was to raise money for the Wounded Warrior Project, an organization that creates programs in order to help military members heal both physically and mentally. On December 5, the Coastal Breeze News caught up with Grant as he rode into the Snook Inn, finally done with his journey.

Welcome back! Are you happy you finally made it to Marco?

Yes. It was a long ride.

How did you keep yourself entertained on the road?

On the back of my bike there’s a Bluetooth speaker and I’d listen to Mumford and Sons a lot. I also listened to Audio Slave, Soundgarden, country music. So 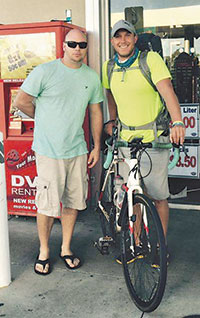 Grant in Pensacola with friend Robert Boes. They spent Thanksgiving together.

What was your favorite place that you stopped at along the way?

I met a guy in the beginning of Arizona and he was like, “Where are you going? What are you doing?” He bought my meal and told me that his kids live all the way across the state and he was like, “when you get there, stay with them.” Now I’m friends with them. One of his kids name was Grant! His daughter’s name was Justine. They cooked for me, made me carne asada. It was really good.

Were you surprised at all by the generosity that strangers would show you?

A little bit. I got a lot of donations 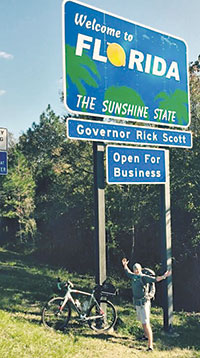 from random people. A lot of people bought my dinners. I’d be in a gas station about to buy something and someone would just pay for it. It was nice.

Did you have any hardships along the way?

I blew 12 tires. Other than that, bridges. In Louisiana the bridges don’t have a shoulder. So the bridge going into Louisiana I actually walked on the ledge of it. The traffic was crazy and there were tour buses coming right next to me. So I walked across. That was the scariest part.

Did you always have a plan as to where you would stay each night?

The only thing that would make me anxious is when people would start texting me asking where I was going to stay. 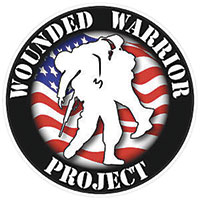 Then I’m like well, shoot I have to get to where I say I’m going to get to. That was the stressful thing. Because once I tell them I gotta get there but what if I pop two tires? That was a little nerve-wracking.

So, are you going to do a ride anytime soon?

I don’t know. If I had all the money in the world I’d just keep on doing rides. But, we’ll see. I’m not going to say no because I could do another one.