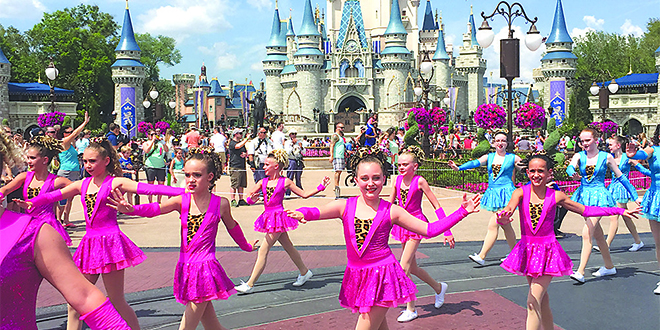 On March 29th the Marco Island Foundation for the Arts awarded the Island Dance Academy a grant for $2,500. The money went towards the dancers’ recent trip to Orlando, Florida, where they performed in the Walt Disney World’s Dance the Magic annual event.

“The girls have been waiting until they were old enough to be able to do the Disney performance,” said Island Dance Academy owner Natalie Strafford. “We found a great program called Dance the Magic that lets studios from all over the country go and facilitate their performances at Disney World and Disney Land.”

According to Natalie, the dancers worked hard and fundraised for months in order to perform in Dance the Magic. They participated in carwashes, bake sales, and even reached out to local businesses for support. All the while they were learning the necessary choreography for their showcase down Main Street, U.S.A.

“It’s really important for them, and for me, to make the girls work towards their goals so that it’s not just given to them, so that they a have a little more appreciation for the opportunities they get to do,” said Natalie Strafford.

Natalie applied for the grant back in February in the hopes of offsetting some of the costs of the trip. Then on March 29th, the Marco Island Foundation for the Arts President R. Clark Lindberg and board member Clara Alber presented the dancers with the money. According to the Foundation, grants are provided to individuals or groups within the community pursuing the “visual, literary and performing arts.”

“Ms. Natalie has great passion and dedication to her students,” said Clara Alber. “Through her different forms of dance she teaches, she brings out the best in the girls.”

On April 1st, the studio made the trek up to Walt Disney World. Dance the Magic is a noncompetitive artistic opportunity for dance studios across the country.  The girls were able to parade down Main Street, performing for the many Disney World visitors.

“We’re super excited that we have a group that was able to go,” said Natalie Strafford. “We’ll be taking more again next season for the younger crew.”

For more information on the Marco Island Foundation for the Arts visit www.marcoarts.org, or call Carolyn Burger at 239-389-0280. Visit Island Dance Academy on Facebook