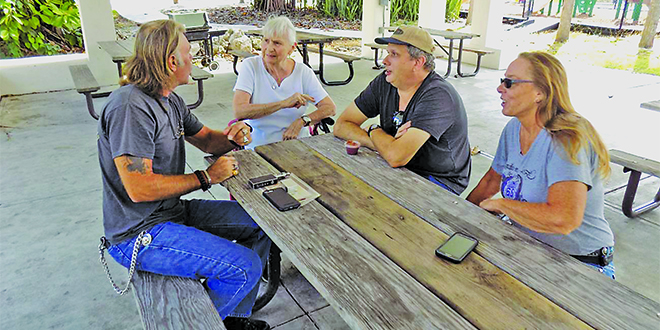 Photos by Barry Gwinn: From left: Mark Kennedy, his mother, Mary Kean, Bill Mueller, and Carol Hughes. Curious as to why Governor Scott kept coming to the Kirk Fish Market in Goodland, the four friends came over from Naples to find out.

Goodland’s Margood Park, built on the site of the old Margood Trailer Park, was dedicated by Collier County in 2012. The crown jewel of the park is a stately pavilion, situated in the shade of two magnificent rubber trees, watered by an ancient underground spring. It is quiet and serene there. The pavilion, used for community events, is also the destination of smaller groups who just want to relax and enjoy each other’s company. On a late Tuesday morning, I noticed two couples, sitting at a table there, whom I had never seen before. I found that they didn’t live in Goodland, but had been long time residents of East Naples and Golden Gate Estates.  They said they had just eaten “brunch” at one of the pavilion tables and had stayed to enjoy the scene. They had come over from Naples earlier. Bill Mueller, the group’s unofficial spokesman works in Naples. His company gets the digital version of the Coastal Breeze, which Mueller regularly reads. He became intrigued with two recent articles about the Governor 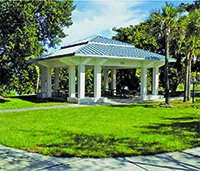 Rick Scott making special trips to eat at the Kirk Fish Market in Goodland. “If the Governor did this, the seafood must have been pretty good,” said Mueller, “We resolved to give it a try.” The party walked into Kirk’s around 10 AM and ordered four servings of stone crab. “We wanted to eat out back on the dock, as the Governor had done, but instead, were directed to a park,” said Mueller, “We enjoyed ourselves so much, that we resolved to make ‘brunch in the park’ a tradition. We will be back.” Kelly Kirk recalls well the two couples who came in to her store that day, hoping to eat on the premises. “They ordered stone crabs with mustard sauce” Kelly recalls, “They asked if we had tables where they could eat. I directed them instead to Goodland’s lovely pavilion in Margood Park. They came back in later and ordered more stone crabs to go for dinner that evening.” Mueller only had one request to make of me. “Please don’t tell anyone else about this park,” he entreated.