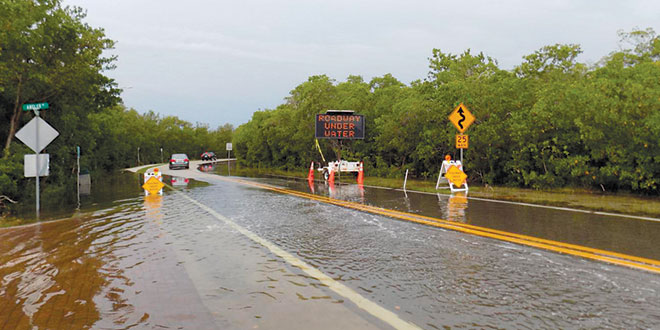 Rich Pappy, a long time resident and Goodland Civic Association (GCA) board member and officer, had previously told me that after the second Interlocal Agreement in 2002, the Village of Goodland was riven by strife and bad feelings. “Many residents felt betrayed by the GCA, for allowing City of Marco Island (CMI] to take over jurisdiction of Goodland Road,” Pappy said, “We didn’t like the GCA leadership and started a rival organization, the Goodland Preservation Coalition. We siphoned off a lot of GCA members.” “The animosity between the two groups became toxic,” Pappy said, “Each group was making claims, counterclaims and threatening lawsuits.” Pappy told me that Goodland Road ceased to get much attention amid the dissension and the pressing of other issues.

John Carter was elected GCA president in 2005. In 2007, Goodland Road began to move off the back burner. In a March 21, 2007 letter to Collier County Manager Jim Mudd, Carter wrote that “given Marco Island’s dismal performance under the [Interlocal] agreement,” it might be time for Goodland to organize efforts to get the County to take back the road. Carter further claimed that, “Marco Island has spent almost nothing of the $1,200,000 (sic) per year for the maintenance of 92A (Goodland Road).” The same day, Carter wrote a letter to CMI which began, “Many citizens of Goodland are upset at the condition of our main road…” I have been unable to find replies from either the County or City, but Carter had started the ball rolling again. John Carter did much to restore order to the GCA and served as president until March 2009, when Mike Barbush was again elected president. Then things really began to move.

From at least the turn of the 21st century, it has been an obsession with Mike Barbush to insure that Goodland has a safe (read dry) and well maintained access road. He has long felt that Goodland was getting neither under the aegis of the CMI. He has continuously haunted CMI council and committee meetings and county commissioners’ meetings urging them to action. Barbush has gone so far as to actually

adopt Goodland Road; a sign just over the bridge confirms this. I have seen Mike out there picking up bottles and cans from the shoulders on numerous occasions.

Originally concerned with deteriorating paving, Barbush has become increasingly alarmed about flooding. In a November 2008 GCA board meeting, Barbush, then vice-president, reported that the County is pushing CMI to raise the height of Goodland Road. “Spring tides have been covering the roads,” Barbush said, “The plan is to raise the road to 5’5” above high water. It is currently at only 2’2” to 3’2.” Barbush reported that CMI claims they are broke and can’t proceed without a grant from FEMA. Barbush said that CMI cannot get such a grant without first doing a prohibitively expensive hydrological study which is satisfactory to the Conservancy, which had been raising environmental objections to the project. Finally Barbush said that Collier County is voicing reluctance to continue the $1M annual payments to CMI until and unless CMI proceeds with the raising of Goodland Road. And so the lines were drawn.

Under the administrations of presidents Mike Barbush, Joanie Fuller, and Greg Bello (current president), the state of Goodland Road has been front and center. A committee was appointed, of which Barbush is chairman. Mike Barbush has remained unrelenting and has kept the GCA up to date on the plight of Goodland Road. He has continued to meet with CMI and County officials.

At a GCA Town Meeting on October 15, 2015, Barbush summarized the latest developments. The situation remained much the same as first reported in November 2008. Barbush said that over the summer, he had attended four CMI council meetings and two Collier County commissioners’ meetings. He said he had also had conversations with County Manager, Leo Ochs. “Goodland Road has been pretty much under water for two or five weeks now,” Barbush told those at the meeting, “The road is riddled with potholes.” Barbush said he believes that CMI will continue its stalling tactics until the County pays the two remaining $1M annual payments. “The County will probably withhold these payments unless CMI begins a requested hydrological study or begins 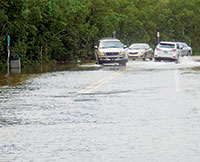 the process of turning Goodland Road over to the County,” Barbush said, “There is sentiment building on the CMI Council to do this.” Barbush believes that once the County takes over, serious talks can begin and a solution undertaken. “The County is exerting a lot of pressure on CMI to move on this. A decision from CMI is expected in the next three or four months.” Barbush concluded.

During the months of August, September and October of this year, I counted about 15 days when I saw that the road was flooded in places by as much as a foot of water. Traffic became backed up and was reduced to one lane in order to escape the deepest water. There were no storms during this period. Most of the days were sunny. On a dry October 27th I witnessed a two or three inch wall of water pouring over the road from the Marco River at the end of Angler Drive. A day or two later, Lou Van Meter, a long time resident, was riding his bike along Goodland Road as he does almost every morning. When he came to the small bridge, he did a double take and stopped to investigate. “There was debris on top of the bridge, which could only have been caused by flooding,” Van Meter said, “I am positive of this. I have been riding this road for years and have never seen this before.” It has been an article of faith in Goodland that if Goodland Road could be raised to the height of this small bridge, the flooding problems would be solved. Now on a sunny, calm day even the bridge had been submerged. Now what?

If one stands on San Marco Road where Goodland Road branches off, it is easy to see that our road dips and drops quite a few feet before entering the mangrove swamp on its way to Goodland. At the other end of the road, much of the Village sits on land elevated by the shell mounds left by the Indians. The problem is getting here from there. 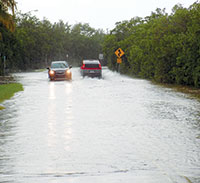 concerning recent sea level change. In its September 13, 2013 issue it concludes that since 1992, sea level has risen three inches. “At an eighth of an inch a year, sea level is rising twice as fast as it was a few decades ago,” says National Geographic. I have talked to Goodland subscribers of this magazine, of which I am one. We see the connection and are fearful for Goodland unless something is done.

To my knowledge, the GCA and CMI have never been able to agree on what can be done. I have attended some meetings and have heard all of Barbush’s reports. I conclude that CMI seems to view Goodland as an irritant and is stalling until Collier County makes all its payments.

The GCA has never been able to have a substantive discussion with CMI on what should be done with Goodland Road. The positions taken have been adversarial and counterproductive. County leadership on the other hand, and Commissioner Donna Fiala in particular, seem to value Goodland as being a unique vestige of the fishing villages which once predominated here. They also recognize it as a popular tourist destination for the County. Fiala has been vocal at town meetings about her concern for the condition of the road. She believes Goodland is worth saving and that the County is best situated to accomplish this. “I have developed a love and concern for Goodland and its people,” Fiala told me, “I will do all that I can to see that the road is fixed.”

After years of struggle, it now seems likely that CMI will begin the process of returning the road to the County. Once that is accomplished, the real work of planning for the road’s restoration can begin. For the first time, a united GCA will be able to discuss what can and should be done, with a partner who is receptive and able to assist.