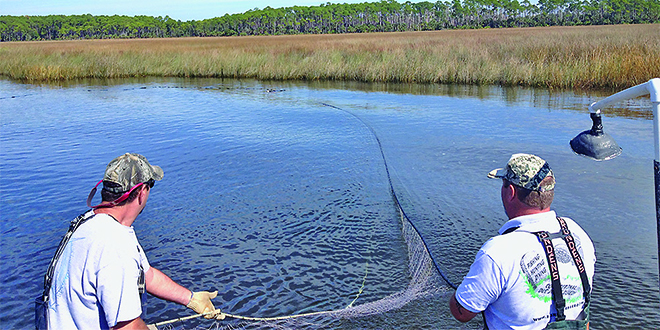 Setting a gill net out from the shoreline – Anchored by a weight at the shoreline, the net is unwound to its full length and anchored to the sea floor at the other end. Floats hold the top near the surface and weights sink the bottom to the sea floor. Fish swimming along the shore run into the net and are entangled by the gills. Gill net photos taken before the ban in 1995.

As you enter Goodland, a colorful sign welcomes you to our “Historic Fishing Village.” In many respects, it is still historic, drawing winter visitors to gawk at our quaint cottages brought over from Caxambas in 1949; but fishing – not so much. People still come here to fish, but the commercial fishermen (excluding stone crabbers) have pretty much given up on us. This, despite the fact that we are on the northern edge of some of the finest fishing in Florida.

One who hasn’t given up is Frog Ellington, who has been pulling in nets full of mullet since 1972. He has always fished without the benefit of the costly gadgets favored by recreational fishermen – no radio, no direction finder, no GPS, no fathometer – not even a compass. “I can navigate the 10,000 Islands blindfolded,” he says, “I don’t need any of that stuff.” There are no winches aboard his boat either. A strong back and two massive arms suffice. He has had his good years and bad, but overall, he has managed to make a good living.

Marty Ellington was born in Miami in 1955. His father, Harvey, who nicknamed him Frog, moved buildings for a living, but like many of Goodland’s early settlers, came over to fish on weekends. Moving the family over in 1965, Harvey established a moving (buildings again) business, but found he could make more money fishing for mullet on weekends. “In those days, gill nets were legal,” Frog said, “Plus there was no limit on either the number or length of the nets you could set out. The family, consisting of his mom and dad, twin sisters and a brother, settled into a canal side home on East Palm Avenue where Frog grew up. The family fishing business was conducted from the dock in the rear. Along with some of the Gober boys, Frog worked his way through school, starting at Tommie Barfield and then to Naples for middle and high school. In 1972, during his junior year at Naples High School, Frog’s father lost his leg in a car accident and could no longer fish. Frog became the breadwinner. “I quit school and took over the family business,” he said. “I had been going out with my dad for years and knew I could do this.” He has been doing it ever since.

Prospects were good when Frog started out. “There was a lot of fish,” Frog recalled, “There was more fish than people, and you could catch as many as you could sell. There were three fish houses in Goodland buying our fish – Kirk’s, Joe Taylor’s and Fishermen’s Co-op, and only six or eight Goodland mullet fishermen to compete with.” Except during the mullet run in December and January, when Frog estimates as many as 200 boats were out on the water. The rest of the year, with no net restrictions or limits on the size of the catch, the profits rolled in. Even boats were cheap. “They were all made of cypress then,” Frog said, “They didn’t cost much, but became waterlogged after four or five years and had to be dried out.” To complete this economically rosy picture, no one was keeping track of anything. “There was only one marine patrol for each county,” Frog said, “If they stopped you it was either to get some fish or find out where the fish were running.” With prospects like these Frog was ready to get married and raise a family. In March 1975, he and his wife, Norma were married in the Goodland Baptist Church. Three sons were born of the marriage, Darrell (nicknamed Tadpole) in 1978, Travis, in 1981, and Kyle 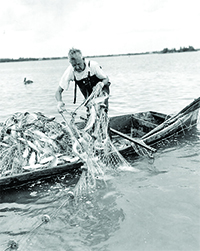 Even a single fisherman can make a lot of money. With gunwales almost awash, this hardy soul has piled mullet clean up to the bow of his boat. Although this photo was taken in the 20s, this model mullet boat is still popular today.

An environmental craze had been growing in the nation since the 60s. The Mackle Brothers were among the first to feel its effects, when in 1978, after being sued, they agreed to give up their developments in the area and move on. In 1995 it reached into the 10,000 Islands fisheries; and everything changed. In that year, a constitutional amendment prohibited the use of gill nets, which capture fish by entangling their gills. The amendment also limited the size of the nets to 500 square feet. Commercial mullet catches declined by 68% after the ban. Many of the mullet fishermen went out of business, some having to resort to food stamps. Pushed by recreational fishermen, the ban is still felt by many to be the most controversial conservation measure ever imposed in the State of Florida. The recreational fishermen claimed that the gill nets were killing game fish as well as mullet. The gill nets did not play favorites, snaring all fish by their gills, causing most of them to drown. The argument still rages today as to whether it had any effect on the fisheries. As a palliative measure, the Florida Fish and Wildlife Conservation Commission (FWCC) offered to buy the banned gill nets from affected fisherman. (Those who chose to stay in the business had to buy seine nets to replace them.) Frog had invested a lot of money in his gill nets. “They came out and measured my nets.” Frog said, “I gave them vouchers [showing that I had paid] $141,000 for them. They issued a check for $41. Cashing that check would have forfeited my rights to sue. It was tough.” He has been in consultations with a lawyer. The ban certainly wiped out what was left of the mullet fishermen in Goodland. “Today, I am the only year round commercial fisherman in Collier County,” Frog says, “There may be 40 or 50, still operating out of Ft. Myers and Pine Island.” Frog attributes this exodus to two factors, both of which grate with him. “There is less harassment [by the FWCC] up there, and more people complaining down here.”

Ellington persevered, but with his income more than halved, he was no longer able to pay the mortgage on his two Goodland homes, losing them both. He managed to find suitable Goodland rentals for a time, but two years ago, moved to East Naples to escape the exorbitant rental rates of the increasingly gentrified village where he grew up. “The damn Yankees bought it all,” mused Frog. He kept his boat in Goodland however, near to the waters that he knew so well.

Despite the ban, Frog was still able to put bread on the table. Knowing every bay and creek in the 10,000 Islands, plus having little competition here, he managed to keep his head above water. He sold to Naples fish houses and restaurants, trucking his catches over in his pickup truck at the end of the day. “Some [merchants] take so many [fish] every week,” he says, “I try not to catch any more than I can sell.” Food fish cannot be sold for fertilizer in Florida, Frog told me. “Sometimes I have to have to leave a lot of fish out there.”

Next edition – A day on the water with Frog.