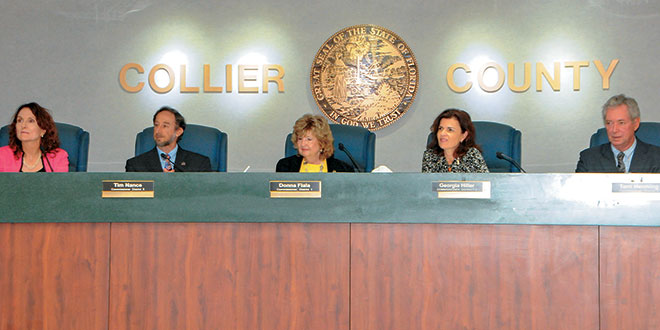 Goodland Road (as it is known here) has been mired in controversy since Collier County turned it over to the City of Marco Island (CMI) in 2002. It turns out that because of increased flooding, the road needs to be rebuilt and elevated at a cost which may exceed $5M, an amount which CMI says they cannot afford. The County wants CMI to proceed with the rebuilding and has threatened to withhold the remaining $2M in annual payments due to CMI under the 2002 Interlocal Agreement. A stalemate between the County and CMI has resulted. Since 2002, Mike Barbush, a four time President of the Goodland Civic Association (GCA) has been fighting a lonely but relentless battle urging both CMI and the County to do something about the increased flooding and deterioration of Goodland Road.

If Barbush was the burr under the saddle of the City and County governments, County Commissioner Donna Fiala, has been one of those sitting on that saddle since the beginning of the controversy. Fiala was destined to play perhaps the greatest role in the fortunes (or misfortunes) of Goodland. Fiala moved to her current East Naples house (from Ohio) in 1974. While raising a family of five children, she joined and chaired a host of Naples civic associations, becoming well known in the area. She became increasingly involved in her community and has been a strong advocate for improving its appearance and impression. It was during her tenure as President of the East Naples Civic Association, that Fiala considered running for County Commissioner. In 2000, she was first elected Commissioner of County District 1, which includes Goodland. She has filled this post ever since and will run for an unprecedented 5th term this year. During her 16 years of service, she was elected Vice-Chairman three times and Chairman three times, the last being in January 2016.

Mike Barbush moved to Goodland from PA, 36 years ago. He raised two children here and established an irrigation business which he runs from his home. Some of his contracts are with CMI. For the past 14 years, 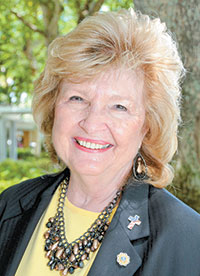 he has haunted CMI Council and County Commissioners meetings in an attempt to convince them to do something about Goodland Road. Time and time again, he has met personally with City and County staffs, their managers and anyone else he thought could help. He has met with The Conservancy concerning their objections to raising the road. By the time Barbush again became President of the GCA in February, 2010, he had gained the respect of many in both County and City.

If Fiala has been Goodland’s Guardian Angel, then Barbush can be said to be its Guardian. To my knowledge, he has never gotten anyone from CMI to attend one of our GCA Town Meetings (I have been to every meeting since March, 2008.), but Commissioner Fiala has become a regular. The improvements to Goodland during this period have been impressive and have resulted, among others, in the development and dedication of two County Parks, a 30% to 40% reduction in our water rates (and now in process of replacing our water main), and finally, in saving the life of one our residents (the County paid for the installation of two automatic defibrillators, just in time to revive a resident in cardiac arrest.) Fiala has been personally involved in all of this. Now she has turned her considerable skills to the solution of the Goodland Road dilemma.

Fiala has made it a point to keep the GCA abreast of Goodland Road developments and assures us that we were not being forgotten. As early as March 2014, she raised the possibility of the County’s withholding the final $2M in payments to the City. “I find it perplexing that after paying the City $1M per year since 2002, the City refuses to act unless the County does,” Fiala then said, “Goodland needs a safe passage for its residents and emergency vehicles. It is not right that we [sic] are being treated as a tiny insignificant community. Our [sic] lives are here and we have to stick together on this.” By January 2015, Fiala reported that the City had not budged. She said she would 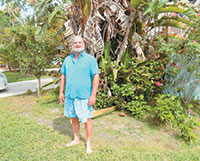 Mark Barbush in front of house

recommend that the County withhold the final $2M owing to the City under the Interlocal Agreement of 2002. “The Collier County Commissioners are solidly supportive to the plight of Goodland,” Fiala told the GCA, “The City has used The Conservancy as an excuse for too long.”

In a May 24 Commissioners Meeting, following another 15 months of frustration, Fiala acted – decisively. She moved that the remaining funds ($2M) due the City, be put into an escrow account; that the Interlocal Agreement be modified [returning the road to the County]; and that a Project plan be developed “so that the folks in Goodland can be assured that we have a timing and commitment.” Fiala spoke forcefully in favor of her motion. “We need to get this job done sooner rather than later,” she told the Commissioners, “Flooding continues to be worse every year. Three different reputable organizations report that the road needs to be raised two to three feet. There is no other way in or out of Goodland and emergency vehicles may not be able to get in.” Fiala pointed out that the residents of Goodland are beholden to CMI for maintenance of the road “when there is only one [City] taxpayer there. We need to fix this road before a catastrophe occurs,” Fiala concluded. As he has done on countless occasions in the past, Mike Barbush rose to summarize his meetings with CMI officials, and the conditions and sentiment in Goodland. Barbush said that in his 36 years in the County, this may be the worst City/County relations he has seen. “Without dialogue [between County and City] there will be no movement [on Goodland Road]” Barbush told the Commissioners, “This has become a matter of public safety. Now it has become urgent.”

The motion passed unanimously 5 to 0. A letter was sent to CMI the next day (May 25th) announcing the decision. Then things began to move swiftly. On June 6, after two and half hours of debate the Marco City Council, passed a motion (5 to 2) agreeing in principle to sit down with the County to discuss

returning the Road, but insisted that until that time, the existing Interlocal agreement must be adhered to “especially the outstanding $2M due to the City.” On June 14th, at a 9:00am meeting, the County Commissioners considered CMI’s response. Fiala noting CMI’s willingness to discuss returning the road to County jurisdiction, moved that the County Manager be authorized to “further explore the [possible] options with the CMI Manager.” There was some resistance to this motion which Fiala addressed. “We have a tiny little village here of 450 people, who are going to have trouble getting out if flooding takes place,” Fiala told the Commissioners, “As the waters rise and this road continues to sink down, they’ll be held hostage because of these things.” It is worth mentioning that Deputy County Manager, Nick Casalanguida, demonstrated a complete grasp of the situation at both of the above Commissioners meetings. Once again, Fiala brought the entire board along and her motion passed unanimously. Her purpose was to start some dialogue and she has done this. I am advised that the County and City Managers will meet sometime in July to begin negotiations.

Commissioner Fiala has persevered and expended a tremendous amount of political capital on behalf of a needy out of the way place with very few votes. Mike Barbush has known her since before she became a commissioner. “Donna Fiala is the best thing that ever happened to Collier County,” he says, “She has dedicated a large part of her life to the welfare of all of us who live here. He added that she always returns his calls. I asked Mike why he has spent so much of his life (mostly under the radar) leading the charge for a better Goodland. “I love this community and care about the people who live here,” he said, “You have to stand up for something to get something.”