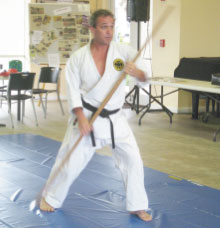 It is no secret that Goodland boasts an extremely diverse group of people. Resident karate master, Sensei Nick Lemke is no exception.

Like most Floridians, Nick is a transplant to the area, but offers one distinct feature that others cannot likely claim. Although born in Wisconsin, he was conceived in Goodland. His love for the town eventually brought him back and inspired him to start a Seibukan karate dojo for locals and other karate enthusiasts in the area.

Once removed from the womb, Nick spent as much time as he could in Goodland. His grandparents had lived here since the late 1950s and taught him everything there was to know about fishing and the ocean. His love for the water encouraged him to pursue a degree in ocean engineering beginning in 1993. This is also when he first began to train in the Seibukan karate style.

Introduced to the specific style by his brother, Craig, Nick began to train with Sensei Dan Smith. Smith, who trained in Okinawa under the original family who created the Seibukan style, is a mentor to Nick to this very day. They even went to Okinawa together on two separate occasions throughout his karate career for intensive three-month training sessions. “During my time in Okinawa I realized the similarities between their island, or shima as it is called in Japanese, and our island. I knew Goodland would be the perfect spot to start a dojo.”

Yet, Nick’s degree in ocean engineering would bring 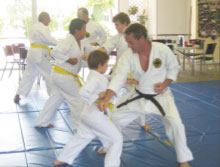 him work that would take him all over the country and even to the Bahamas. He continued to train in karate with others as well as on his own. Twelve years later he received his black belt. It took another seven years to become a second-degree black belt.

At this point he knew he would eventually become a teacher of Seibukan. He was even encouraged during his training abroad. “After my first visit to Okinawa my Sensei told me ‘now you ought to teach. If you really want to get better and you want to learn even more you must start teaching.’ I knew at that point that I wanted to teach but I couldn’t because of all my travels.”

Throughout his travels and training his heart was still in Goodland. In 2000 he purchased a house here, making it his home base as he continued to travel for work. However, the nomadic lifestyle began to take its toll and Nick decided to make a major change.

In 2009 he finally moved to his home in Goodland permanently. He was married at the Goodland Baptist Church just as his parents were many years ago. His next move was to start his own business, EcoNick’s Computer Service. The flexibility of running his own company finally gave him the chance to realize his dream.

Last November Nick opened his own karate dojo out of his home on Goodland. He began to teach a number of Goodland’s children at no charge and also trained with other karate enthusiasts in the area. The success and excitement of becoming a Sensei encouraged Nick to explore more teaching options. This led him to the Marco Island YMCA.

a week at the YMCA where he teaches students of all ages. Five of these classes are based on the traditional Seibukan karate style. The other two classes are Kobudo style, or weapon-based classes. He recently hosted two one-week summer camps through the YMCA where beginners and more advanced students came together for more intensive training.

Visiting the camp was quite an experience. Watching six-year olds kick, punch and spar with such intensity proves that a Sensei with passion can not only train the body but the mind as well. “I used to let the kids hit me in the stomach but now they are starting to punch so hard that I have to be careful. They not only know how to hit but where to hit,” explained Nick.

While the students were taught the basics of Seibukan karate principles and movements, the practice is a constant learning process. Sensei Nick reiterated these facts to his students using his twenty-plus years of training as an example.

Through hard work in all areas of his life, Nick Lemke has finally realized his dream of starting his own dojo. And the best part of it all? He was able to start it in a place he has called home since before he was even born.

To learn more about Sensei Nick’s karate classes visit the Marco Island YMCA at 101 Sand Hill Street or call at 239-393- 3144. He may also be personally reached via email at nick.econicks@gmail.com