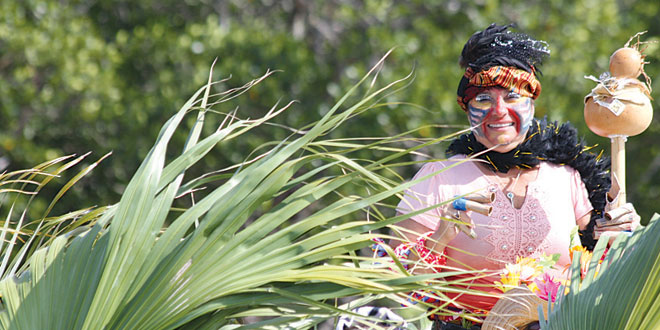 On Saturday, February 16th, fourteen boats (including the one that I was on) braved high winds and brisk weather to participate in the 17th Annual Goodland Mardi Gras Boat Parade, where all proceeds from the day go to Hospice.

This year’s theme was Broadway Musicals and none was more represented than the musical, “Hair,” with three boats entering as such. Other appearances were “The Book of Mormon,” “South Pacific,” The Lion King,” “Cats,” “Mary Poppins,” and “Evita,” to name as many as I can remember. After all, I was on one of the “Hair” boats. Get it?

The popular yearly event raises money through the sale t-shirts, beads, hats, other items and the selling of raffle tickets throughout the island. Winners were announced at Stan’s at 4:30 PM, along with the winners of the Boat Parade.

While every boat received a prize for entering, the tie for first place went to “The Lion King” and “South Pacific.” Both boats donated their prizes back to be raffled off to ticket holders.

This year, Goodland held a special early 50/50 raffle where only 500 tickets were sold at $10 a piece. The tickets quickly sold out and when the winner was announced at Stan’s the Friday before, they decided to donate the money back to Hospice.