Goodland Water Line Replacement What Will Happen? When? 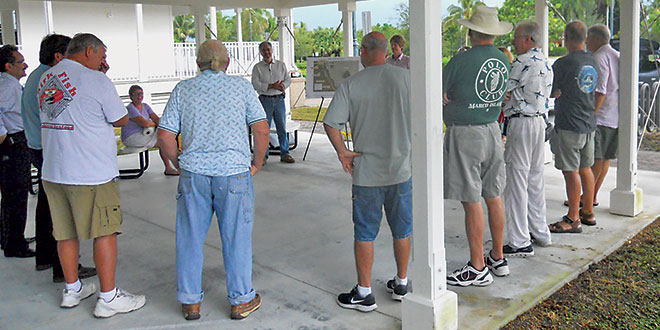 Photo by Barry Gwinn August 24th county informational meeting at Goodland Boat Park. Everyone seemed pleased that the construction was postponed until next spring.

On or about April 17, 2017, Quality Enterprises, with offices near Collier Boulevard and I-75, will begin replacing Goodland’s main water line from San Marco Road to Harbor Place N. (just short of Stan’s). Grady Minor, of Bonita Springs will be the engineers for the project. The project, costing $612,305, was originally scheduled to begin in October, but has been moved back to next April because of Goodland merchants’ concerns about disruption of their businesses during the high season. The county brought together all the principals on August 24, to answer questions. The meeting was held at the County Boat Park pavilion and was attended by most Goodland restaurant owners as well as a smattering of residents. After the contractor, engineer, and county officials explained what would happen and when, Steve Gober, the owner of Stan’s, expressed his appreciation, for the county’s agreeing to wait until after season to begin the project. The relief of the Goodland restaurateurs was palpable. All were smiling.

The project is scheduled to take 180 days. It will begin in mid-April 2017, with a connection to the Marco city water line on San Marco Road and end at Harbor Place N. The new 8” PVC pipe will cross under San Marco Road, and after hooking up with the pumping station at

Submitted PhotosA section of new waterline pulled back through the tunnel created by the directional drilling machine (right). The machine will now turn around 180 degrees, drill another tunnel in the opposite direction, and pull back another section of new water line to be fused with this one.

the water tank will proceed east, down the north side of Goodland Road to Harbor Place N. There will be no digging of trenches along Goodland Road from San Marco to Angler Drive. Instead, the PVC pipe will be laid out alongside the road, and fused into 120-foot lengths. The fused pipe will be pulled though a passage 10 feet deep, which has been reamed out by a machine which drills and flushes a passage. After the next 120-foot section is pulled through, it is fused to the first, and so on down the line. There will be five such operations, which will cause temporary lane closures, but only on the 120-foot section where work is going on. The sequence of each 120 section has not yet been determined. Each operation, consisting of predrilling, reaming, pulling, and fusing will take 12 days. No work will be done on the road at night, on weekends, or on holidays. What will take longer however are two sections which will require 3-foot deep cuts or ditches. The first is at the Goodland water tank, where intricate connections must be made to the pumping station. An open ditch is the best sway to accomplish this. The second open ditch will run from Angler Drive to Harbor Place N. Drilling and pulling will 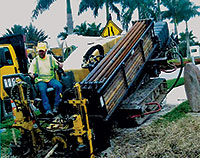 Directional drilling machine in operation, drilling and scouring a 10-foot deep tunnel for the new water line. At the same time it is pushing through a reamer, enlarging the tunnel. Extra lengths are added to the shaft, as needed. When the drill emerges through the exit opening down the line, a section of new water line is hooked on and pulled back through this hole.

not work here either, as there are several hydrants to be replaced and connections made for the folks on Angler Drive, Sunset Court, and Harbor Place N. A final connection will be made to the existing main line, which runs out Goodland Drive West to the county boat park.

So, the plan is that only one section of the road at a time will have lane closures, lasting 12 days each, except at the open cuts at the water tank and at Angler Drive, which will take longer. The contractor must leave the construction areas in the same or better condition than when he found them. For comparison purposes, videos will be taken of the areas before construction begins. Grady Minor Project Engineer Justin Frederiksen feels confident that Quality Enterprises can handle the job, next spring and summer. “They are experienced in dealing with the rainy spring and summer conditions,” he said. “It shouldn’t be a problem for them.”

The county is committed to getting this done next spring. They have already conducted three informational meetings and have brought a large contingent to each one. The buck stops with Dr. George Yilmaz, head of the Collier County Public Utilities Department. He became aware of the objections of the Goodland merchants right after an August 17th informational meeting at the Marco

Directional drilling map, illustrates scheduled work next spring. Yellow areas will be done one at a time, approximately 12 days each, and will not require open excavations. Purple area, because of numerous connections to be made, will require open ditch and will take longer.

Library. “We hadn’t realized the possibility of serious potential disruptions to Goodland businesses if construction occurred during the high season,” Yilmaz said, “I learned of the objections when the team called me [right after the August 17th meeting]. I immediately contacted the project engineer and determined that the window beginning in mid-April was sufficient to get the job done.” With this information Yilmaz felt confident in approving the postponement until next spring. He did so the next morning. “If the contractor won’t hold the price, we intend to ask for another round of competitive bids,” Yilmaz added, “Who knows. We might get a lower bid.” That’s not likely, given that the bid was for October construction, not next April. It does illustrate however, the county’s commitment and determination to get this done, even if the delay costs more money.

Reaming and pull back process illustrated, in this case, how a waterway can be tunneled under. Except for the two open cuts, the entire Goodland main replacement will occur at a depth of 10 feet, probably to minimize problems from periodic flooding of roadstead.