Goodland Road Primer Where Did County’s $13M go? And Why? 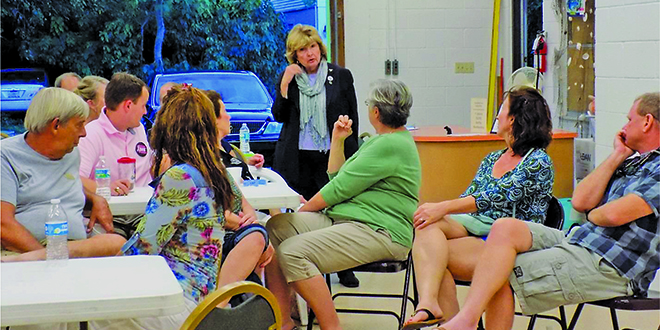 At an October Goodland town meeting, County Commissioner Chairman Donna Fiala answers questions about Woodland Road, and assures that the county will take back the road and see that necessary rehabilitation is accomplished. Fail has made Woodland a top priority for the county.

Seasonal residents returning to Goodland in mid-October were dismayed to find another monthly spring tide flooding substantial portions of the road. The author’s wife had to postpone a doctor’s appointment on account of it. “Why isn’t the county doing something about this?” one resident asked, “Driving through the salt water will ruin our cars. Are we putting enough pressure on the county to fix this?” The short answer to the question was and is that the county (CC) doesn’t own the road; the City of Marco Island (CMI) does. “Is it true that CC has been paying $1M per year to CMI to maintain this road?” the resident continued, “Why hasn’t CMI used this money to fix the road? What have they done with the money?” CMI would reply that they have spent the money ($13M so far) as intended – on maintenance of infrastructure on its roads and bridges, including Goodland Road. Has it?

Goodland Road has had a star crossed history. Until 1938, it didn’t exist. The only way to get into Goodland (or into Marco Island, then known as Collier City) was by boat. In that year, San Marco Road opened, connecting the island with Route 41. It passed within a mile of Goodland, but mangrove forests intervened. Harry Petit, an enterprising Goodland pioneer, got CC to promise to surface a road to Goodland, if Petit would build it. Petit hauled shells over, on a makeshift oil drum barge, and painstakingly cleared the mangroves, filled in the low spots with resulting debris, and created a shell road into Goodland. Because he built it from high spot to the next high spot, it became windy and curvy. True to their word, CC then graded and surfaced it with asphalt. That is apparently all they did. In 1957, all roads reverted to the county, after Collier City unincorporated. Ironically at that time, Goodland was the most populous settlement on the island. When CMI was incorporated in 1997, a situation arose wherein the county was still responsible for the maintenance of all roads on the island even though they were now within CMI limits. In 1999 and 2002 interlocal agreements between CC and CMI effectively transferred jurisdiction of all 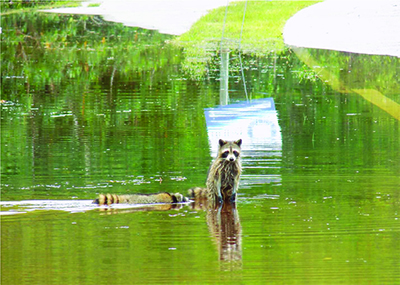 A mama raccoon contemplates leading her pup across Woodland Road, during a September 2015 flooding.

roads on the island (except in unincorporated Goodland) back to the city. As a result of negotiating these agreements, it was agreed that CMI was entitled to some compensation for the added maintenance costs of all the roads they were now responsible for, including a the curvy one-mile stretch of Goodland Road. In the 2002 agreement, CC agreed to pay CMI $1M per year starting October 1, 2002. It is worth quoting paragraph five of the 2000 agreement that set up the payments:

“5. The County agrees to budget and appropriate on an annual basis and pay to the City the sum of One Million Dollars per year for a period of fifteen years, in return for the City assuming, from October 1, 2002 and in the future, all maintenance and operational responsibilities for the roadway segments set forth in paragraphs one and two above (CR92 – San Marco Rd. and CR92A – Goodland Rd.) and for all roadways within the City as permitted under Florida law.” (Emphasis supplied.)

This has been the most misunderstood paragraph in either of the two interlocal agreements, many people believing that the yearly $1M payments were solely for Goodland Road. This is not the case. CMI was to use this money for road infrastructure throughout the city, including but not limited to San Marco and Goodland Roads. CMI has received $13M from CC so far, but claims it has spent far more than this on its road infrastructure. “Since 2001, the City of Marco Island has spent $52,293,774 on the former roads and assets that were previously under the County’s jurisdiction,” wrote CMI Council Chairman, Bob Brown, in a 6/10/16 letter to the CC Commissioners. CMI has not yet broken out how much of this money was spent on Goodland Road. It should be noted that final estimates for the the replacement of the Smokehouse Bay Bridge alone, are now north of $8M. However, the amount of attention CMI was giving to the road soon became an issue.

Beginning in 2003, the Goodland Civic Association (GCA), led by its president, Mike Barbush, began pushing CMI to elevate and resurface the road. At the same time, appeals were made to CC to take the road back. CMI seemed to 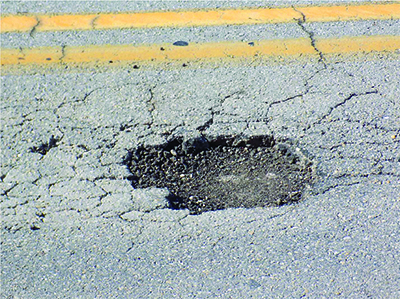 Goodland Road 1/25/16: This is one of many recent patches that have eroded soon after repair. What is left of the patch (made c. 11/21/15) is seen as darker, loose material inside thehole. A familiar pattern of raveling around the edges is seen. Frequent submerging, along with heavy traffic (including occasional 18-wheelers) combine to crumble the road surface.

have turned a deaf ear to Barbush’s pleas, but the county seemed at least receptive. Regardless, for the next 14 years, Barbush continued to haunt CMI council and CC commissioners’ meetings urging that action be taken. During this time the road began some serious deterioration due to increased flooding and traffic, which caused raveling, crumbling, and numerous potholes. CMI was hard pressed to keep up with it; many here felt they weren’t really trying. Old timers claimed that Goodland Road has always flooded and that this was nothing new. Some of them have now changed their tune. National Geographic reports that since at least 1980, sea levels have been rising more than one inch per decade and that due to faster than expected climate change, this rate is accelerating. In any case, to many of us, it is increasingly apparent that portions of the road are now below sea level.

Goodland finally caught a break in 2012, when Commsioner Donna Fiala, arguably the most respected commissioner on the CC board, took a personal interest in Goodland’s plight. She regularly attended GCA town meetings,and began urging her fellow commissioners to withhold the remaining $1M annual payments to to CMI, until CMI fixed the road. In September 2015, this newspaper started publishing a series of reports on the road and in 2016, local TV stations began sending crews out to report on the flooding and road conditions. In the spring of 2016, CC did notify CMI that they were withholding the last two $1M payments until the matter had been satisfactorily resolved. This prompted negotiations between the parties, with a view to the county’s taking the road back and making the necessary repairs, including elevation of the road. In September, the CC board unanimously backed this approach and so notified CMI. That’s how things stand now. “Nothing further will be done this year,” Fiala announced at a recent GCA town meeting, “It is my guess that CMI is waiting for election results, before replying to the county.”