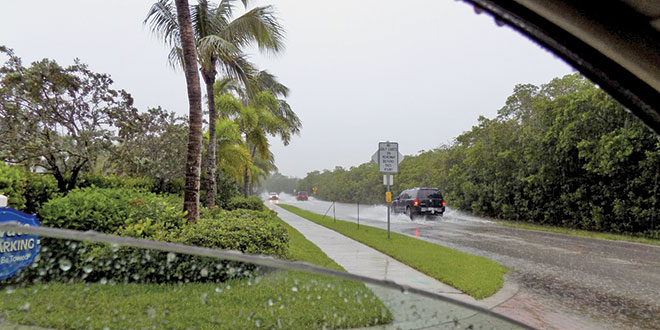 Goodland Road, on the first of three days of flooding. A storm that barelymade a ripple in Collier County flooded Goodland’s only access road with 8” to 18” of water (1 PM, 8/30/16).

An unnamed tropical depression, 350 miles west of Marco Island, caused more serious flooding on Goodland Road on Tuesday, August 30. Torrential rains also added to the maelstrom, with rainwater having nowhere to go due to seawater gushing in through the road’s only two drains. The result was the usual chaos in traffic trying to get in or out of Goodland.

On Wednesday, August 31, the flooding continued, although not quite as severe.

On Thursday, September 1, Hermine, now a tropical storm, was approaching the Big Bend of Florida’s panhandle. It was partly cloudy here, dry, and breezy. Goodland Road, however, suffered flooding as bad or worse than the previous two days. By mid-afternoon, 8” to 20” of seawater covered portions of the road. The traffic was largely confined to commercial vehicles, zigging and zagging to avoid the deeper spots. I observed a pickup truck, which zagged when he should have zigged, immersed in water up to his right rear truck bed at one particularly deep spot. Goodland residents, many of them women who had gone shopping or to doctors’ appointments earlier in the day (my wife among them), struggled to get back in the afternoon. It was literally a white-knuckle trip for them, both hands gripping the wheel, unblinking eyes glued to the water ahead, hoping for the best. I stood and watched as they inched by, through what appeared to be more like a river rather than a road.

Every car or truck which came through the flood during the week had its undercarriage submerged and thoroughly soaked by the salt seawater. At least two local Goodland merchants have recently had to replace their commercial vehicles when the undercarriages rusted out. Their businesses require deliveries and pickups in Marco Island. They have no

Submitted PhotoCollier County Commissioners, from left: Penny Taylor, Tim Nance, Chairman Donna Fiala, Georgia Hiller and Tom Henning. Only Fiala and Taylor will return after the November 8 elections. In a Sept, 13 meeting, the commissioners were visibly moved by the plight of Goodland, passing a unanimous resolution with the aim of taking back ownership of Goodland Road and elevating it above sea level.

choice but to plough through the seawater. “I wince every time I have to go out [through a flooded road],” says Jay McMillen, owner of All Marine boat repair service in Goodland, “After seven years of doing this, I had to get a new truck [due to a badly rusted undercarriage]. Now my new truck is taking a worse beating.” John Hackett has a thriving painting business in Goodland with customers also on Marco Island. “Last year the undercarriage of my van literally dropped out,” said Hackett, “It was shot through with rust. It was the saltwater that did it.”

Through the week, to the writer’s knowledge, the rest of Collier County’s (CC) roadways were dry – at least there were no reports to the contrary. On Tuesday evening, a local NBC crew did report 18 inches of standing water in a Marco Island resident’s yard – nothing about flooded Marco roads. On Thursday, a local CBS crew came out to film the Goodland Road flooding, reporting it that evening. I am told that there was no mention of other road flooding in the county. Since then, NBC-2 news and WINK news have filed at least four reports from Goodland.

At their September 13 meeting, the CC commissioners voted unanimously (5-0) to write a letter to the City of Marco Island (CMI), proposing that both CC and CMI give top priority to Goodland Road, deferring all other road projects. Deputy County Manager, Nick Casalanguida made the presentation to the commissioners. The project would involve a 3-foot elevation of the road. CC and CMI would each apply for grants and MPO money. The remaining $2M owed to CMI would be applied toward the project. CC would supervise the project and take ownership of the road upon completion of

Photos by Barry GwinnGoodland’s recurring nightmare –On this third straight day of flooding, there was no rain or any known reports of flooded roads in Marco Island or the rest of Collier County (9/1/16).

construction. In July, County Manager Leo Ochs and Casalanguida drove to Marco Island and met with CMI Manager, Roger Hernstadt. Hernstadt agreed that the above might be the best option, but it needed to be taken to city council. Both CC and CMI rely heavily on federally funded MPO money for highway infrastructure. MPOs (Metropolitan Planning Organizations) are mandated by the federal government in metropolitan areas of over 50,000. The Marco Island-Naples area easily qualifies. The CC MPO, made up of local government and governmental transportation representatives, recently approved a budget of $266M, $138M of which is dedicated to highway projects. A large portion of this is designated for the I-75 interchange at Collier Boulevard and improvements to SR29. With CMI’s help and collaboration, CC hopes (between the two municipalities) to obtain a $6M piece of this pie for the elevation and reconstruction of Goodland Road. The problem is that this budget is set through fiscal year ’20-’21 and Goodland Road is not included in it. Judging from the last two commissioners’ meetings, the county now has the political will to get this done as soon as possible. There was a consensus that the safety and health of the people of Goodland would be at increased risk at any delay in the project. Commissioner Penny Taylor was particularly forceful in suggesting that the County should even consider borrowing the money, should the MPO not make it available until 2021. Commissioner Georgia Hiller wanted the County to take back the road now and proceed, regardless of CMI’s collaboration. She wanted it added to the county budget “now.” Taylor concurred saying, “we should do it with ‘em or without ‘em.” Deputy Manager Nick Casalanguida reminded the commissioners that CMI still owned the road. Chairman Donna Fiala was 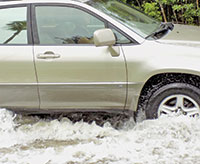 A white-knuckle trip for Nancy Gwinn, who suffers from Parkinson’s Disease, as she returns to Goodland from necessary doctors’ appointments. The flooded roadway at 2:30 PM was dry when Nancy left at noon (9/1/16).

perhaps the most determined and eloquent of all. “This is urgent,” she said, “the sea level is rising faster than anticipated. This can’t wait until [fiscal year] ‘20-‘21 (when new five year MPO funding will be obtained). [The people of Goodland] are county taxpayers. They are our people and it’s our responsibility to take care of them.” Alarm for the safety and wellbeing of Goodland was palpable throughout the discussion. The commissioners were also anxious that a system of communication be set up with the Goodland Civic Association, pending the completion of construction, lest any Goodlander not be able to summon or receive rescue for a weather or health event. “This is going someplace,” Fiala assured the commissioners, “We’re not going to let it languish.”

It is getting so that increasing portions of the road are covered to some extent at every monthly spring tide. Every high tide brings water at least to the edge of the road. The situation is a recurring nightmare bringing with it the despair of having no fix in sight. The GCA has long felt that CMI, which has owned the road since 2002, has turned a deaf ear to our pleas for remediation or even adequate maintenance of the road. The constant flooding of our only way out or in, along with the potholes and deteriorating road way is disruptive to our lives, destructive to our vehicles, and a ticking bomb, threatening our personal safety. Chairman Fiala’s words and determination are an encouraging balm and a beacon of light in a stressful situation.