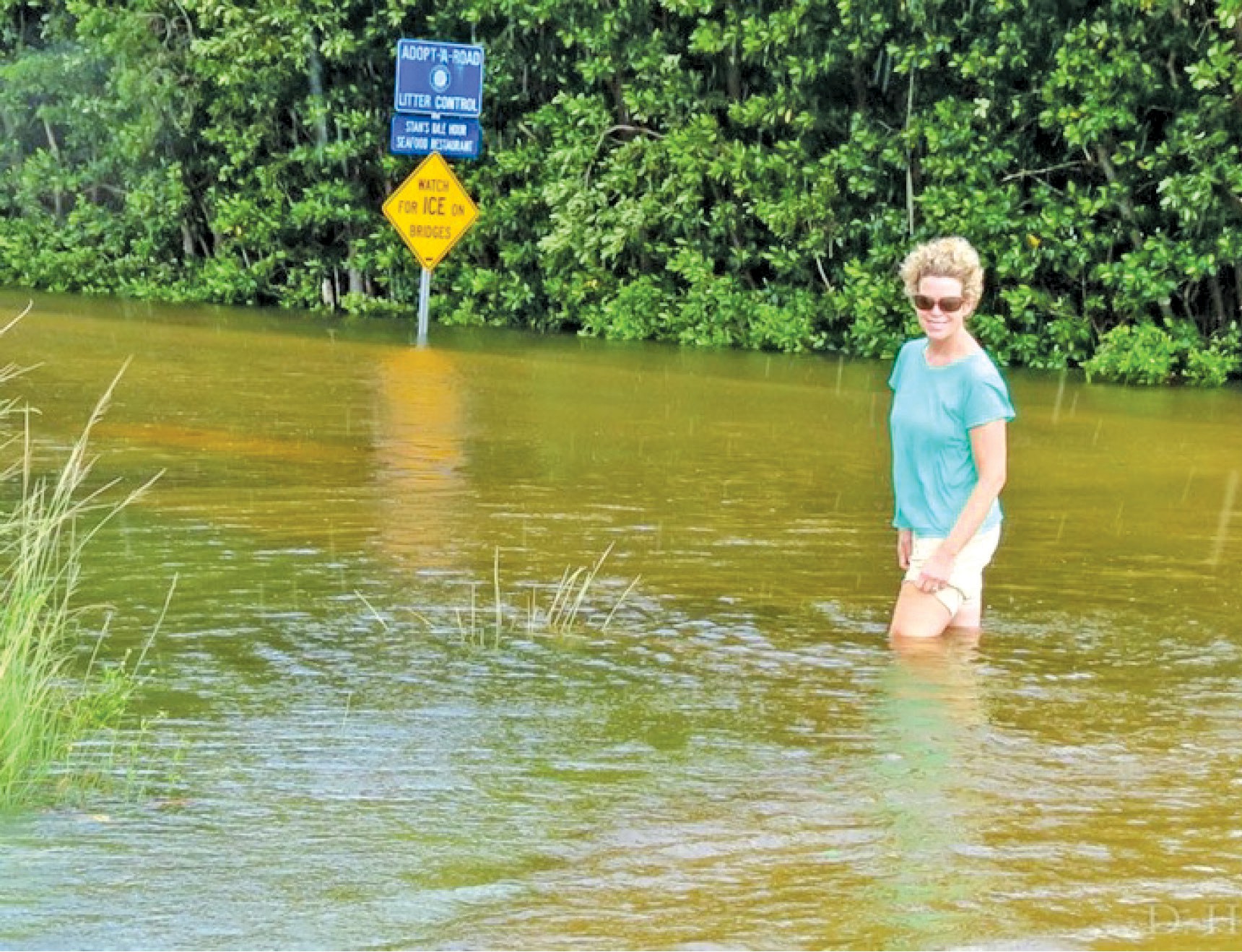 Liz Pecora at Goodland Road and Harbor place during an October 2015 flood.

On July 11, 2017, the Collier County (CC) Commissioners, unanimously approved an agreement with the City of Marco Island (MI) in which jurisdiction of Goodland Road would be returned to the county. It’s been a long slog (literally) for Goodland residents, visitors, and deliverymen who have been sloshing, grinding, and bumping over Goodland Road for the last 17 years. Since Collier County (CC) ill advisably gave jurisdiction to the City of Marco Island (MI) in 2002, amid claims of neglect by MI, the road has deteriorated under the pressures of increasingly heavy traffic and the pernicious effects of frequent flooding, due to portions of the road now being lower than sea level. Flooding causes disruptions to the schedules of many trying to get in or out of Goodland. On dry days, the potholes and raveling of the visibly crumbling road must be negotiated. Throughout those years, Goodland leaders have been unhappy with the perceived lack of attention MI was giving to the maintenance of the road.

From 2002 to the present, Mike Barbush, thrice president of the Goodland Civic Association (GCA), has spoken at virtually every meeting of the MI City Council or the CC Commissioners, when Goodland Road has appeared on the agenda. Barbush, with dogged persistence, 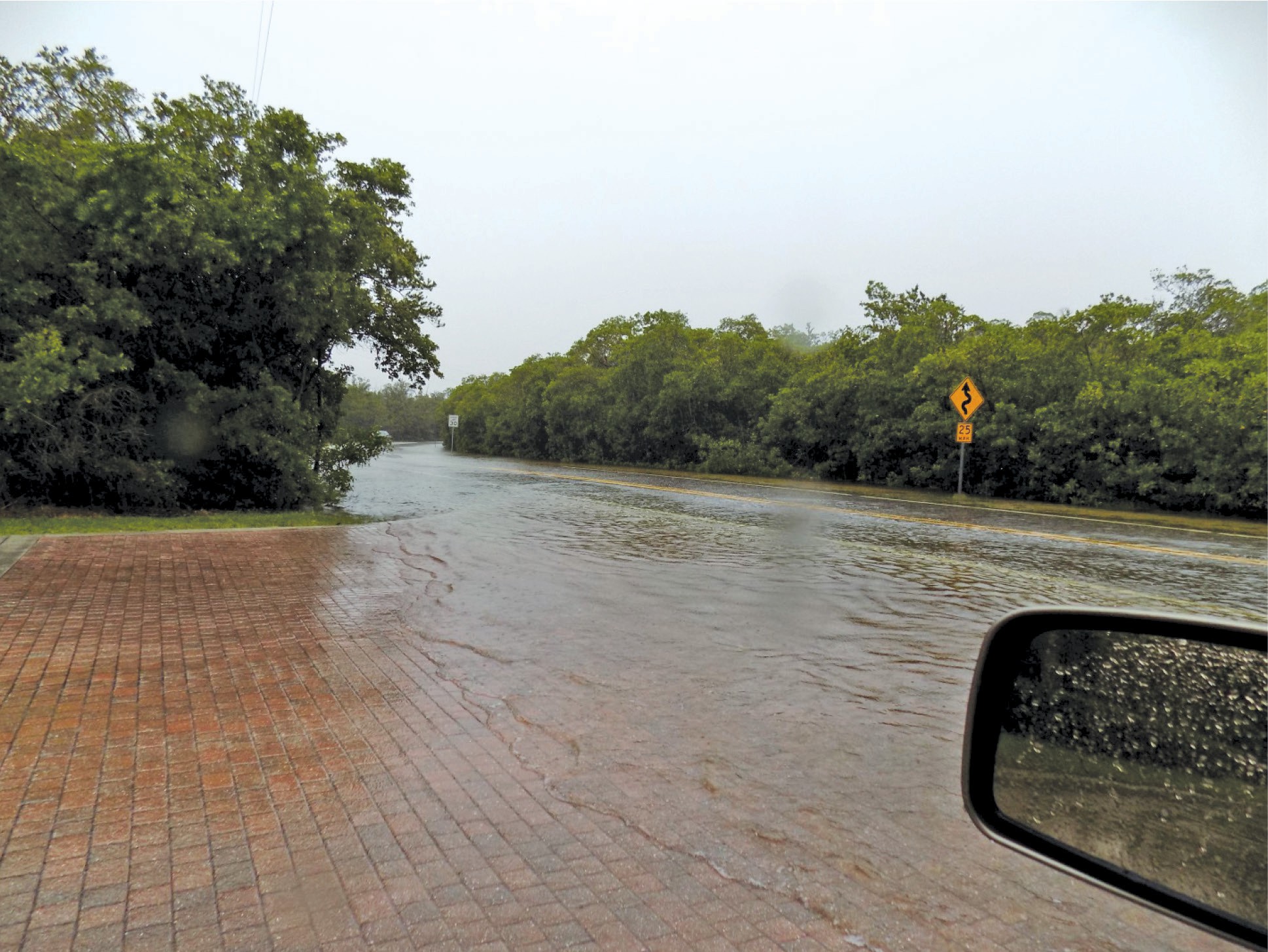 has pushed for MI to raise Goodland Road above flood level atmosphere. The MI Council and city staff liked and respected Barbush (I have witnessed some of his presentations), but probably saw him as a gadfly who wasn’t going away any time soon. According to Barbush, the MI councilors resorted to stalling tactics for the next 15 years. They did offer what they thought were cogent excuses for not proceeding with a project to raise the road, however. First, they said they couldn’t afford the four million dollar price tag, and second, even if they could, environmental groups would not allow the destruction or disturbance of mangrove trees along the right of way. Undaunted, but frustrated at the city’s procrastination, Barbush took his appeal to the county.

In 1998, one year after MI’s incorporation, CC ceded to MI, jurisdiction of all roads within the city limits. However, Goodland Road (CR92A) and San Marco Road (CR92) were exempted, with CC retaining the control over these vital arteries into Goodland and MI respectively. But in 2002, with no effective opposition from the GCA, CC relented and turned these roads over to MI, with an agreement to pay MI $1M annually for the next 15 years, with the stipulation that the 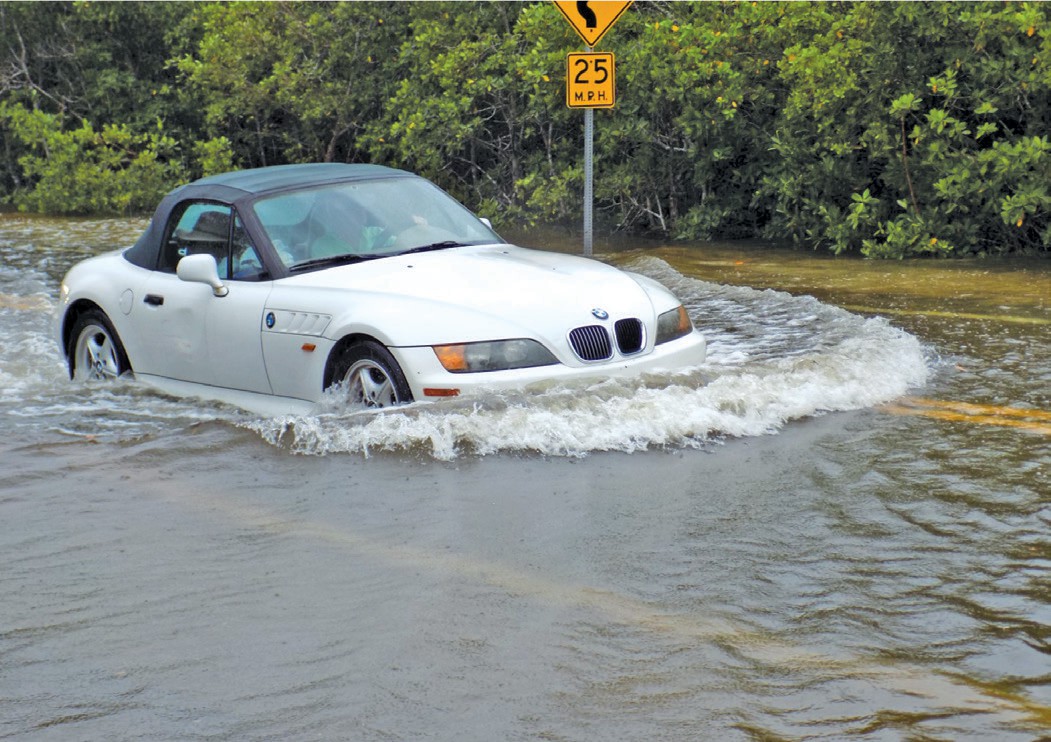 A winter visitor in an early model BMW sports car tries to get in to Goodland (January 2016). Photos by Barry Gwinn

money be used for the maintenance of CR92A and CR92 and such other city roadways “permitted by law.” It bears noting that many Goodlanders were in favor of this arrangement; others weren’t paying attention. The GCA board of directors was split on the question. Barbush and Connie Fullmer, another GCA visionary, had begged the county not to do this. They pleaded with the county commissioners (to no avail as it turned out) not to leave them to the mercies of a municipality in which they had no representation.

In the years that followed, CC had not forgotten Goodland. In fact, they poured millions of dollars into the development of county parks and improvements to the water system here. The Goodland Road mess seemed to be intractable however. The Great Recession had made MI more dependent than ever on CC’s annual $1M payments. Seldom publicly mentioned, these annual payments were always the elephant in the room. MI fought to hold on to them, and they appeared to hold all the cards. As long as they owned the road, CC could not touch it and was contractually bound to keep the payments coming through 2017. By 2010, MI had all but ceased any pretension of raising the road. The matter 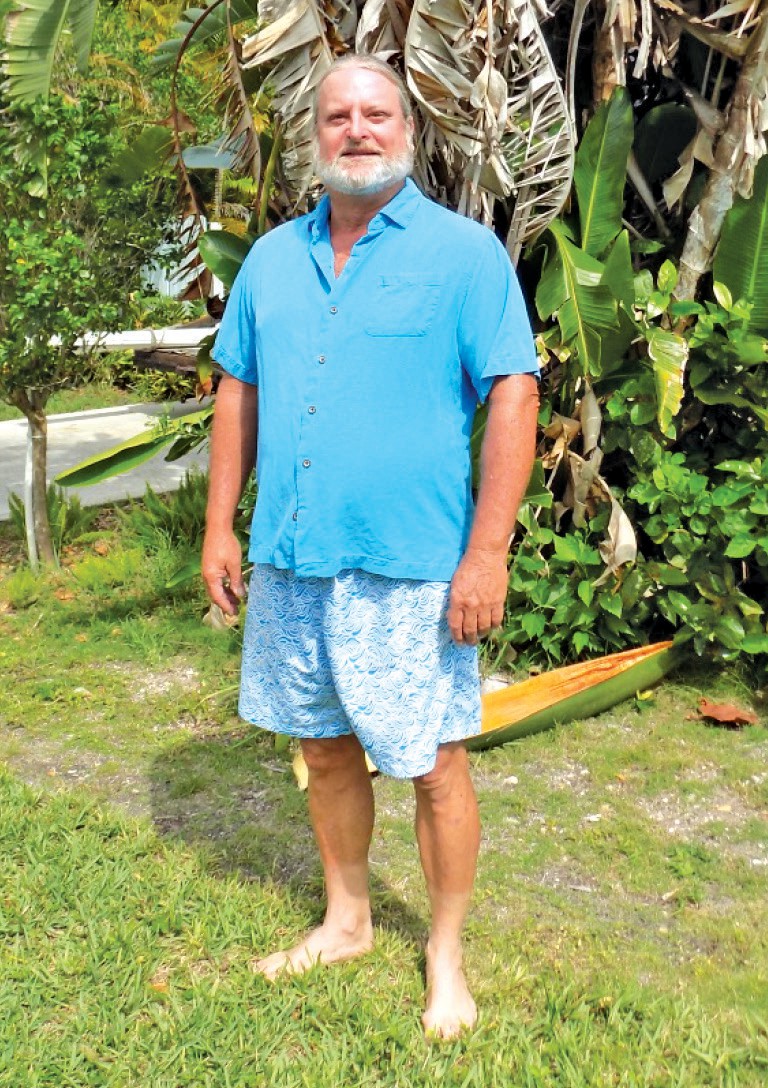 Three-time president of the GCA, Mike Barbush, who for 17 years never gave up in his quest to save Goodland Road.

Barbush’s constant lobbying didn’t go unnoticed and had resulted in valuable contacts at the highest levels of county government. Chief among these was County Commissioner Donna Fiala, arguably the most respected and loved commissioner in Collier County’s short history. Elected as county commissioner in 2000 (and still serving today), Fiala has been fierce in her representation of CC District 1, which includes Goodland. In 2013, Fiala brought County Manager Leo Ochs over to meet with the GCA’s Goodland Road Committee, of which Barbush was chairman; additional meetings followed, resulting in a strategy to get MI off the schneid.

In October 2015, Fiala reported at a GCA town meeting, that CC was threatening to withhold the last two $1M annual payments unless MI showed some good faith effort to raise the road or in the alternative to return it to the county. In November 2015, this newspaper began running the first of six articles on the perceived “deplorable condition” of Goodland Road and the stalemate which was holding up any improvements. In the summer of 2016, and faced with the possible loss of the payments, MI City Manager, Roger Hernstadt began meeting with Leo Ochs to negotiate a settlement. When Hernstadt resigned in February 2017, MI 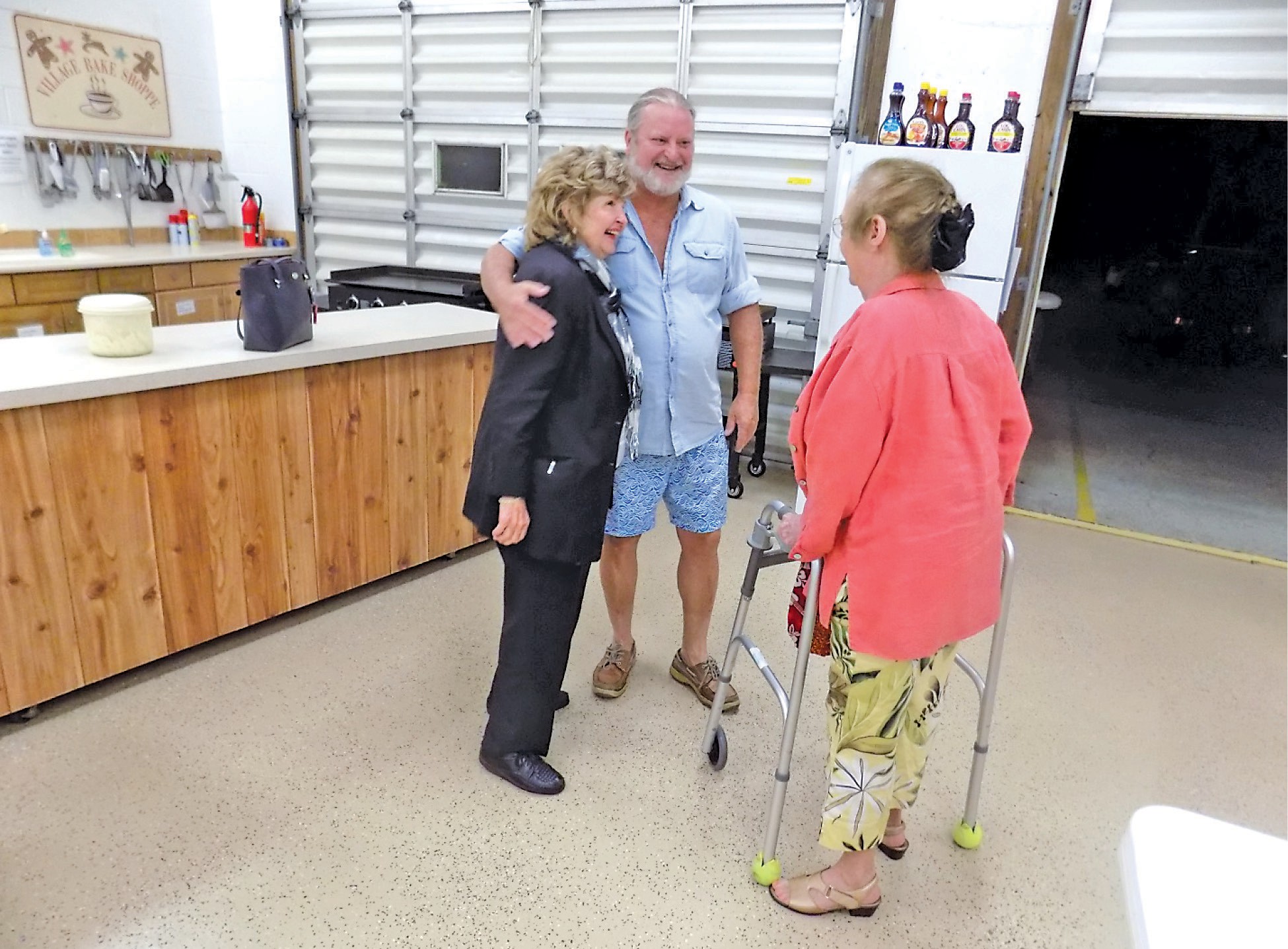 Council Chair Larry Honig took over the negotiations. He had been one of the first in MI city government to publicly acknowledge that MI could not handle a project of this size and that the road should be returned to the county. Now, he was in the catbird seat. At a March 6 MI Council meeting Honig told the council that the best solution was for the county to take back the road. “I believe that [Goodland] deserves an elevated roadway so that its citizens have unfettered access to their homes and businesses,” he said, “Only the county has the experience and expertise [to pull this off]. [With your approval], I am prepared to act quickly on this.” The council went along, and with warp speed, a joint meeting of the MI Council and the CC Commission was set up and a new agreement mutually agreed upon, bringing Goodland Road back to its alma mater. MI withdrew its claim to the $2M, previously withheld by CC. MI ratified the agreement on June 19; CC did likewise on July 11. It became effective on July 20, 2017. Now the hard part begins. 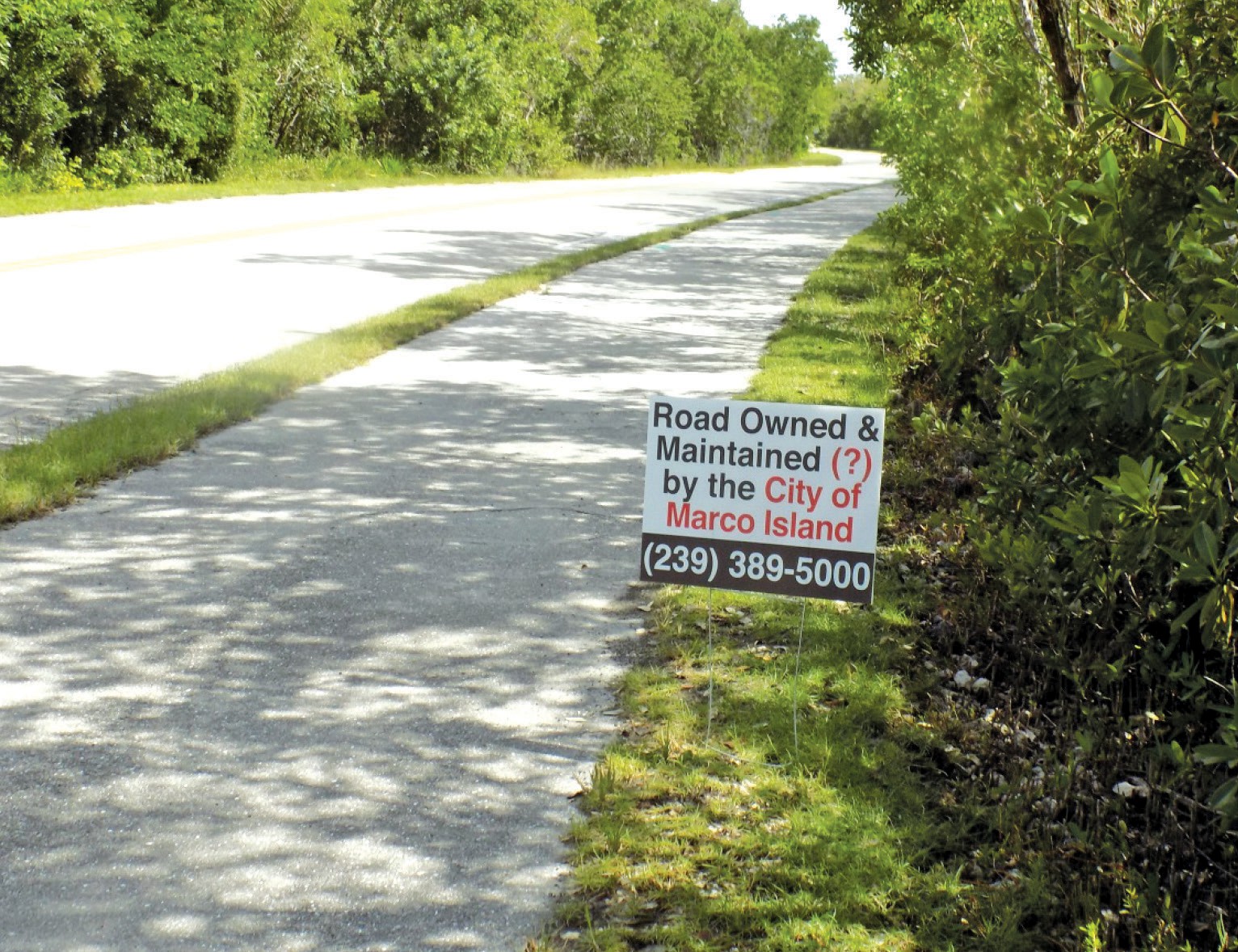 Fed up with Marco Island’s perceived neglect of the road, an anonymous Goodland resident posted these signs along Goodland Road last September. The telephone number is the City of Marco Island.

and MI Council Chairman Larry Honig. Barbush, who has stuck with this from the beginning, tends to deflect the credit to others. “A lot of people got us here,” he said, “Donna Fiala always has our back. County Manager Leo Ochs and Assistant Manager Nick Casalanguida were steadfast in negotiations with the city, and City Council Chair Larry Honig started moving the city towards this agreement two years ago.” Barbush also credits current GCA president, Greg Bello, and resident civil engineer, Steve Morgan, for helping to keep the pressure on. “The GCA is a force to be reckoned with,” adds Barbush, “because we love our village of Goodland.”

MI Council Chair Larry Honig has been working for over a year to convince the city council to move on this. In addition to Ochs and Fiala, he gives a lot of the credit to Deputy County Commis sioner

Nick Casalanguida, “who could not have been more helpful.” “Not only is [the amendment] a win-win for Goodland, Marco, and CC,” says Honig, “but it is also the right thing to do. It has always been inherently unfair to the great community of Goodland for its citizens to be dependent on a city government they did not elect.” Honig hopes this 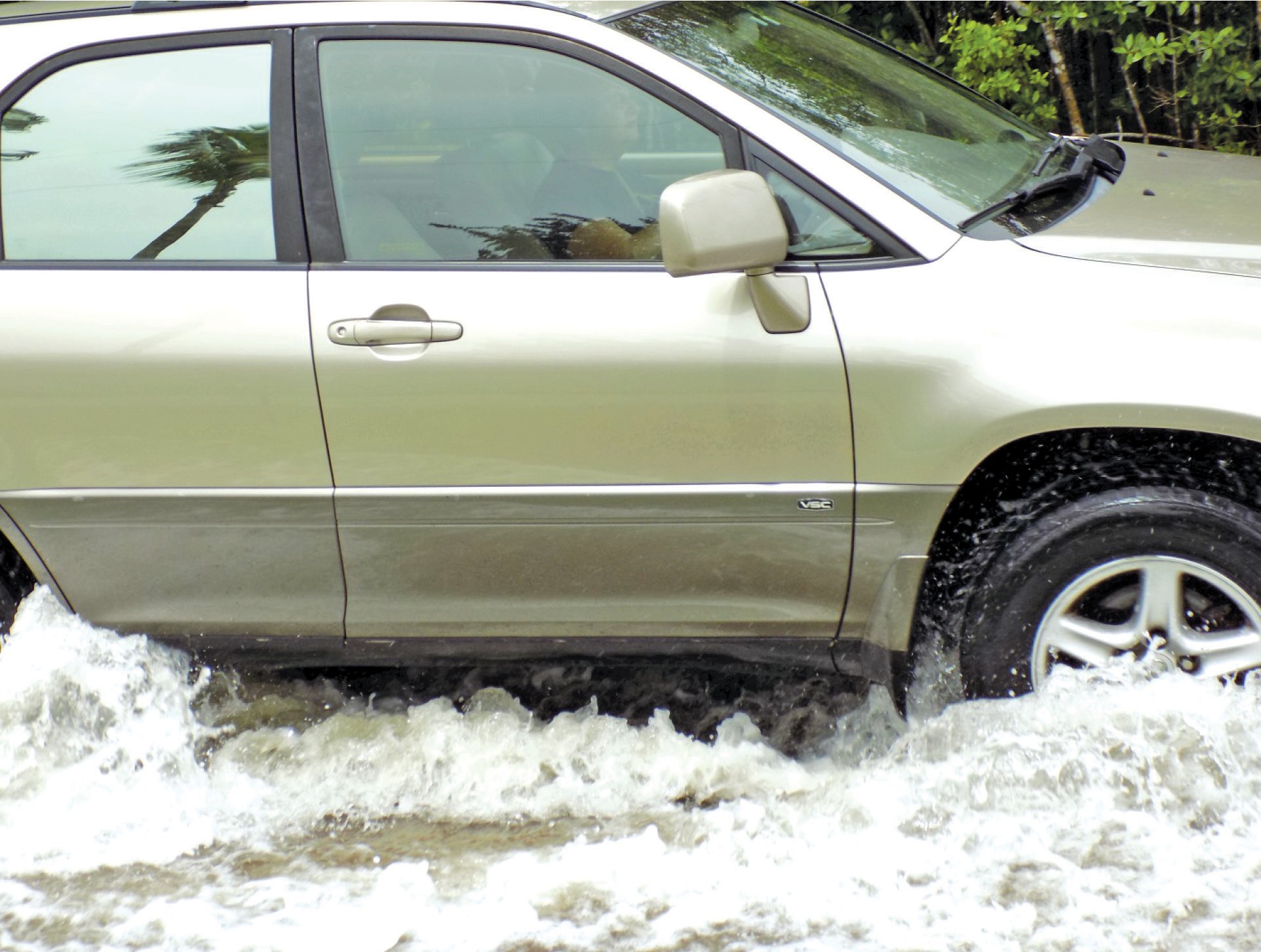 The author’s wife returning from a doctor’s appointment; a stressful and white-knuckle experience. The road was dry when she had left earlier. (September 2016).

will usher in a strengthening of the relationship between MI and CC, which had suffered as a result of the controversy.

Commissioner Fiala can look back with satisfaction on her behind the scenes efforts to bring relief and hope to the residents of Goodland. “It’s been a long struggle,” she said, “but worth it to eventually ensure that these wonderful people will eventually have safe access to their businesses and homes. It was the working together with the good folks of Goodland, the MI City Council and the dedicated county staff [that made it happen]. But now the work really begins,” Fiala warns. “It will take two years to get the permitting in place to even begin.” While waiting for the permits, CC will contract for studies and designs and then finally go out for bid “and get the job done the way it should be done.” “We’re going to really need a party when the job is finished!”

Next edition – What does the new agreement really mean?