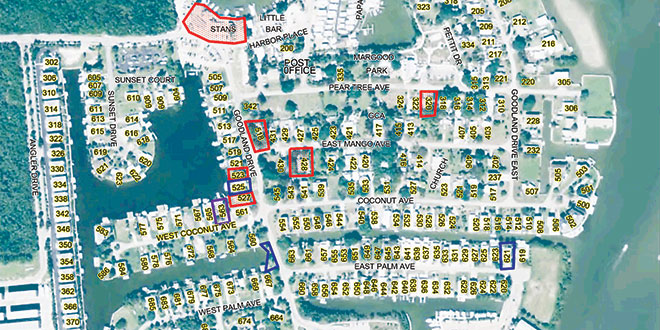 In the July 10, 2015 issue of the Coastal Breeze, I reported the theft and vandalism of four golf carts and an attempted burglary at Stan’s. An arrest has been made in the Stan’s burglary which has no connection with the other incidents during that week. That suspect has never lived or worked in Goodland. Since my prior article, I have learned of two additional burglaries, during the same time period, both of which seem to be related to the golf cart thefts. I have reviewed police reports and newspaper articles. I have interviewed residents whom I know and trust. Some have requested confidentiality. Their accounts are not conflicting and are confirmed in large part by reports of the Collier County Sheriff’s Office(CCSO). In my view, the CCSO has done outstanding investigative work here, particularly Detective Richard Nieves. Detective Nieves kept doggedly running down leads until he was able to arrest two of the subjects involved.

From Sunday June 21 through Wednesday, June 26, 2015, there were two burglaries, one attempted burglary, one attempted grand theft, three grand thefts, and three instances of vandalism. The CCSO was all over this and has arrested Andy Lee Christensen, 20, East Naples for theft of one of the golf carts. Christensen was also arrested for a burglary at 527 Goodland Dr., in which $250 in cash was stolen. Jonathan Kriqui, 17, of East Naples, was also arrested for this burglary. The burglaries and thefts began on 7/21/15 and ended on 7/26/15

David Weaver, 523 Goodland Drive, advised that on about 7/21/15, two of his best deep sea fishing poles worth about $200 were stolen from his garage. The poles were stored in the rafters of the garage. The poles were there when he got home at 1:00am, but were gone the next morning. Weaver went out knocking on doors. He questioned a blond haired blue eyed youth, age 18-20, later identified from a photo as Terry Lee Christensen, age 20. Weaver told Christensen that if the rods were returned, he would say no more about it. Christensen said he had seen two fishing poles leaning against the house next door (525 Goodland Drive). He took Weaver to the spot, but the poles were gone. Christensen said he could have sworn the poles were there 10 minutes ago. On the 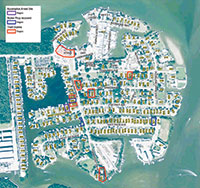 way out of the neighbor’s property, Weaver caught sight of the tip of a fishing pole, protruding from the bushes, between 525 and 527 Goodland Drive. Both poles were then discovered hidden there. In the days preceding the golf cart thefts, the neighborhood had been teeming with as many of eight kids. They would fish off the dock next to Weaver. After the golf cart thefts, they all disappeared.

Andy Lee Christensen grew up in Goodland, but moved over to Naples with his mother Kristin, a couple of years ago. Christensen’s mother was known as Kristin Christensen when she lived in Goodland, but now goes by the name Burgess. In 2011, Andy Christensen was arrested by the Marco Island PD for burglarizing the gas station on Barfield Rd. $50 was taken. In March, 2015, Christensen was arrested during a traffic stop in Immokalee on an outstanding warrant for lewd and lascivious battery on a person 12 to 16, a felony. The incident involved furnishing vodka and marijuana to minors. This case is still pending.

The day after the Weaver burglary, Monday, June 22, a theft of $250 cash was reported by Ashley Gravely, 527 Goodland Drive, Apt. B. There are two units in this building. Andy Christensen was then staying in the other. Gravely left her residence from 10am to 12:45pm. She was acquainted with Jonathan Kriqui, who lived around the corner. She was also acquainted with Andy Christensen, who had just moved in next door in Apt. A. Police reports indicate that both Christensen and Kriqui had been invited guests in Gravely’s residence earlier that morning and were present outside when she left. When Gravely got back, she saw that $250 was missing from her nightstand. On June 24, CCSO detectives found a palm print and fingerprint of Andy Christensen on the living room window consistent with lifting the window from the outside. On June 26, Christensen was arrested at the home of his mother, Kristin Burgess, 5355 Dixie Dr., East Naples. On July 1st, Kriqui was located and interviewed around the corner, at 563 Coconut Ave. Kriqui confessed to being present at the burglary and was arrested on the same date. Jonathan Kriqui, age 17, had been a tenant at 563 Coconut Ave. for about a month before the above incidents. Kriqui sported an Afro and was 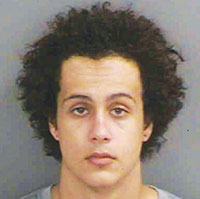 Steve Kaplan runs Carter Dock, a well-established Goodland marine construction business. His plant is at 561 Coconut Ave. It abuts both 527 Goodland Drive, and 563 Coconut Ave. He is well acquainted with Andy Christensen. Kaplan said he had not seen Christensen in over a year. Kaplan also saw Kriqui with Christensen. The trouble in the neighborhood started when Christensen arrived. A few days before the golf carts were stolen. Christensen moved in with his half-brother next door. Kaplan observed Christensen, Kriqui, and others lounging in the back yard. A few days after Christensen moved in, some stolen fishing poles showed up in the bushes on the border of 527 Goodland Drive. Then, $250 was stolen from a woman who lived in the same building where Christensen was staying. The thefts of the golf carts occurred shortly afterward. After that, Kaplan did not see any more of Christensen. Kaplan heard that he had been arrested.

On Tuesday, June 23rd, at about 10:30pm, Christensen was again sighted by another witness in Goodland. This was the first time this witness had seen Christensen in over a year.

A few hours later, on Wednesday, June 24th, at about 3:00am, three Golf carts were stolen and vandalized. An attempt at stealing a fourth was foiled by the intended victim. The losses caused by these thefts totaled more than $5,500. At least three young men were involved; only Andy Christensen was identified. A witness who had known Christensen when he still lived in Goodland, identified him as he walked away from one of the stolen carts. On Thursday, July 3d, a warrant was issued charging Christensen with the theft of this golf cart. Christensen was at that time, still in jail for the Gravely burglary.

Investigation reflects that on about July 19 or 20, Andy Christensen arrived in Goodland and moved into Apt. A, 527 Goodland Dr. The burglaries and thefts commenced on about June 21st. Jonathan Kriqui moved here on about June 25 and stayed at 563 Coconut Ave with two other tenants. On about July 25th, Christensen reportedly asked to move in with Kriqui but was rebuffed. Kriqui lived around the corner from Christensen. There was a report that Christensen had been kicked out of Apt A. On the same date, 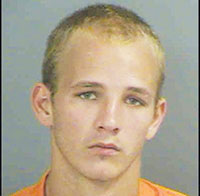 Christensen moved back to Naples. On July 26th Christensen was arrested for the Gravely burglary at his residence in Naples. He was incarcerated then, and while in jail, was additionally charged with one of the golf cart thefts. There have been no crimes reported in Goodland since July 26.

I have lived in Goodland for nine years. Like most of my friends, I have come to love this community. It is visceral and we are not ashamed to express it. It is the friendliest most neighborly place I have ever lived. My job took me all over the U.S. I have never lived in a place that comes close to Goodland. My phone number is usually posted on one of our GCA display cases. Additionally, I am often stopped for directions on my daily walk over to the post office. Whether by phone or in person, I am often asked about Goodland. I never hesitate to tell the inquirer that if he or she has an opportunity to move here, they should, by all means, do so – without delay. An opportunity like this may never happen for them again. I tell them I have finally found place where I want to spend the rest of my life. Unlike any place I have lived, I have never regretted moving here.

I hear that many years ago, Goodland was kind of wild and wooly. It is hard for me to imagine. That was then. With the exception of the Stan’s attempted burglary, the events chronicled above were all linked to one troubled young man. The shenanigans started when he got here and ceased four days later when he left. Although it caused genuine hardship to the victims, it is but a blip on our otherwise peaceable and law abiding way of life here. There are a lot of feel good stories in Goodland. I have related some of them on these pages. I have a lot more in the hopper. As I said, this one is just a blip, and I look forward to continue my writing about the good in Goodland.