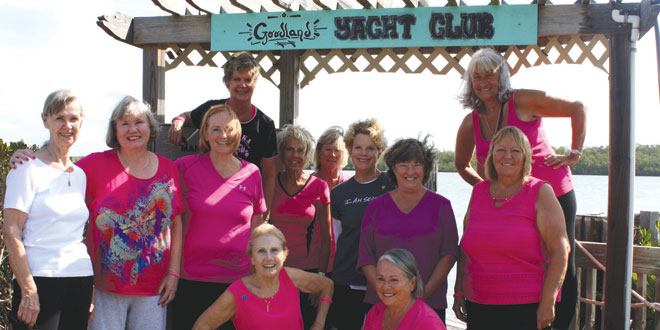 Whenever I think of the term “potpourri” I think of dried up flowers that stink. Honestly, I was never into that stuff. But the word, itself, has an alternate meaning. Merriam-Webster’s second definition of potpourri is: a miscellaneous collection. And that, my friends, is what this edition of Goodland Life is all about. A potpourri of information that doesn’t stink.

Recently, the Board of the Goodland Civic Association elected its new officials for 2013. Newly appointed President Greg Bello informed members of the board that an anonymous donation was made toward a plaque for past President, Joanie Fuller. Many may recognize her name as Joanie and I share the Goodland Life column.

Joanie is still an active member of the board and spent two years “running the show” during some difficult times. She helped negotiate Goodland’s contract with Collier County regarding the Goodland Boat Ramp; this was no easy task.

Joanie was also influential in the recent abolishment of the Goodland Water District. This move was felt in the pocket of every Goodlander as water rates – Goodland was paying some of the highest water rates in the state – dropped dramatically.

– the date of the Goodland Civic Association’s monthly meeting – President Bello presented Joanie with the plaque of gratitude, thanking her for all her hard work. The crowd cheered and applauded for Joanie, the noise echoing off the walls of the cement block Civic Association. It was an exciting and emotional moment. Thanks for all your hard work Joanie!

There is a psychological phenomenon that exists where people often don’t notice things that have suddenly changed among their regular environment. Our brains make maps of the places that we live, work, go to often, etc. And our brains will often ignore changes because they don’t match those maps. (if you read my bio, you will see I was actually a psychology major. What I’m doing writing, I have no idea.)

Anyway the point of this is that, one day I showed up at the Post Office, like I do every day, and some of the bricks above the flower bed out front were randomly painted in hues of blue, purple, teal and yellow; not all of them, but a good amount and it looks really nice.

I have no idea how long 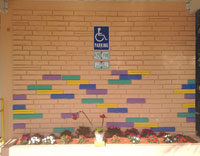 it was there before I noticed it, but about a week after I did, a neighbor and I ran into each other at the Post Office and he pointed out the bricks to me. I said, “Yeah, they’ve been that way for a while.” He replied, “Really? I just noticed it today!”

Ladies Lunch After a Season of Sweating

Goodlanders don’t only gather at the bars. Some gather early in the morning and break a sweat. From January through April, a group of ladies met at the Civic Association twice a week to work out together, inspire each other, have a few laughs and, more than anything, have a good time. As season winds down, so has the workout group. On April 11th, the ladies met for the last time to work out and then celebrated with a 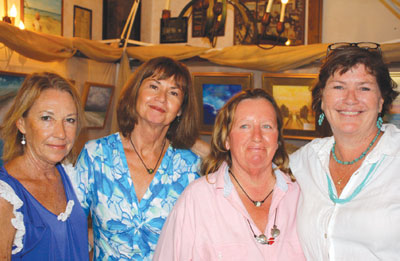 breakfast at Marker 8. It’s easy to take it slow in Goodland, but these ladies made sure they still kept active. Great job gals!

Artist Tara O’Neill’s Tenth Annual Art Extravaganza at the Little Bar Restaurant was held on April 13th and 14th from 1 to 4 PM. Tara’s latest original seascapes were on display as well as many of her well-known pieces. In high demand, O’Neill is currently the featured artist at the Marco Island Historical Museum’s and also showcases her work at Blue Mangrove Gallery on Marco.

This year, Tara invited three of her Goodland artist friends to join in the Art Extravaganza. Margie Fortune, Celeste Navara and Judy Wittwer all showcased their unique artwork. Margie specializes in blown glass beads while Celeste takes beautiful portraits of Southwest Florida. Judy is a shell artist, specializing in mirrors and frames.

All four women were present at the show, enjoying the time spent with admirers of their work. A delicious fruit and cheese spread was offered along with unlimited pours of mango mimosas. The beautiful weekend weather certainly mimicked the artwork inside the Little Bar.

So, there you have it. A potpourri of Goodland activity. And it doesn’t stink either.