Introducing Bradley Davis – But how long will he last? 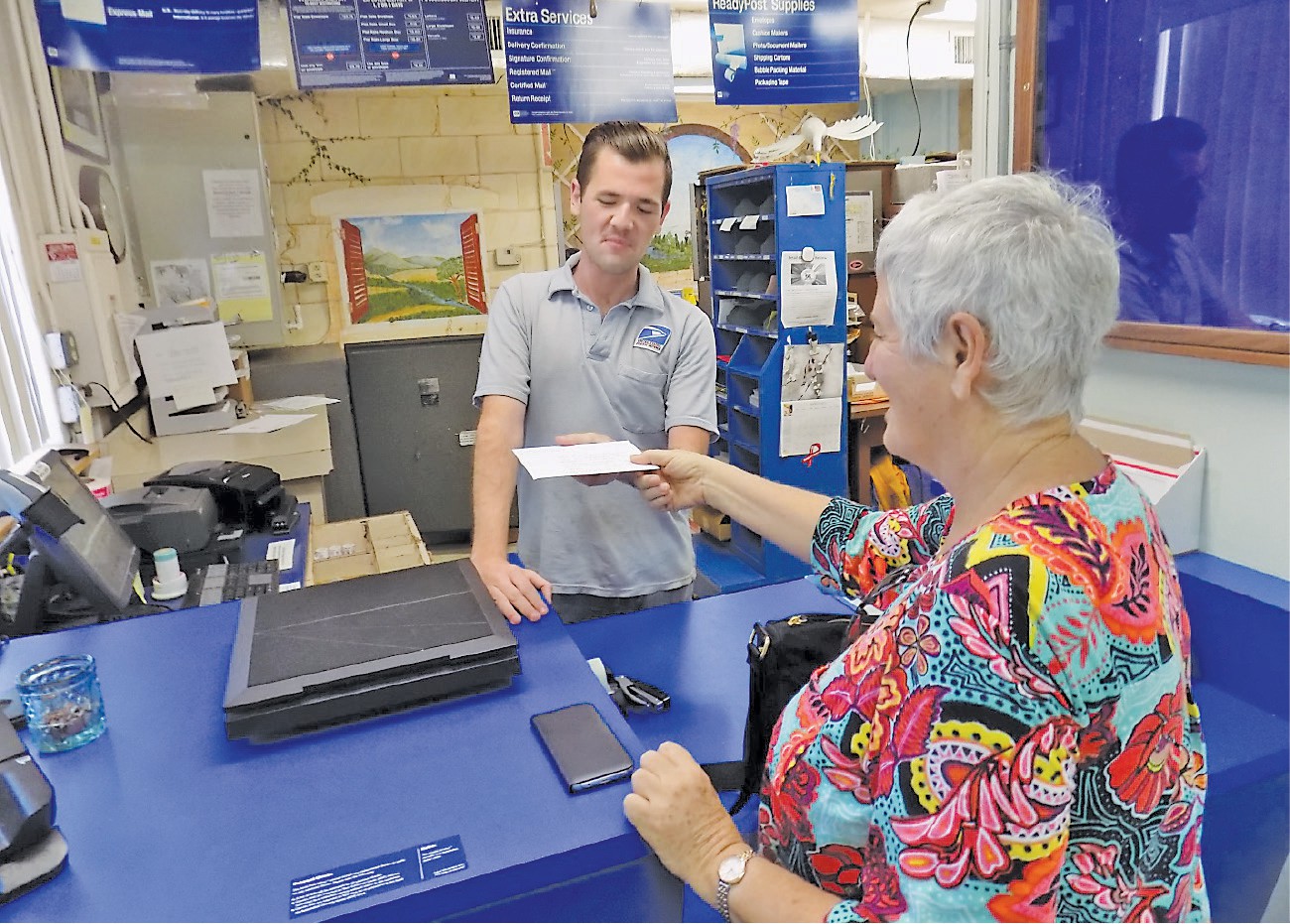 On April 15, Goodlanders had a chance to welcome Bradley Davis (22) as our new de facto postmaster (We haven’t had an actual postmaster, since Judith Pritchard resigned in 2012.), coming to us on a transfer from a post office in Kentucky. Shortly after getting his G.E.D. in 2013 (he was home schooled by his mother, who is a statistics professor at a Lexington community college), Bradley was hired as a part time clerk at the London Post Office, where he lived with his parents. For the next 3+ years, he toiled as a carrier and clerk, waiting in vain for a full time position in Kentucky to open up. None did. “Full time positions are rarely posted in Kentucky,” Bradley said, “I loved working for the post office and knew I must first get a full time position in order to pursue a career there.” This spring, a job on the USPS web site did offer a full time clerical position, but it was at the Goodland Post Office, almost 1,000 miles away. Bradley jumped at it. His record must have been pretty good as he was soon picked to fill this position, the opening resulting from Asiel Rodriguez being transferred to the Marco Island Post Office.

This was an adventure Bradley wanted to take. He is an avid fisherman, hunter and 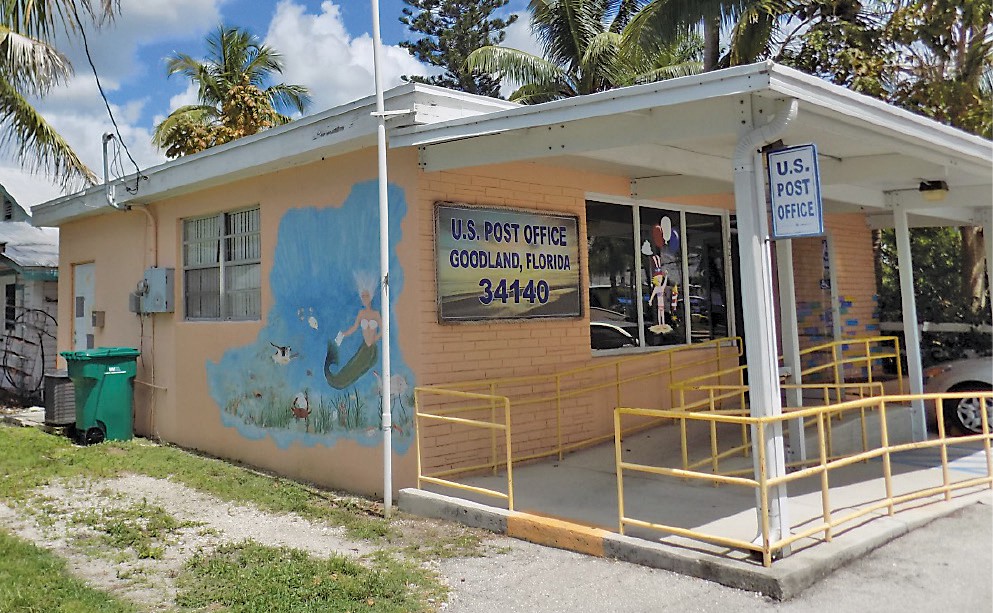 Our post office, the pride and joy of Goodland.

golfer (he shoots in the low 80s). The beaches were also an attraction. He figured that given his hobbies, an island in the Gulf of Mexico would be perfect for him. So far, it has worked out that way. In an unusual twist, his only sibling, Emily (24), pulled up stakes in Kentucky and moved down here with Bradley. She is working at the Marriott and shares a Marco Island apartment with him. They both love it here. “Goodland is a beautiful town,” Bradley says, “The people here are warm and welcoming.” Bradley has proven to be a fast study. He is courteous, pleasant and accommodating. Most importantly, he gets the mail up on time. His goals are simple. “I just want to do a good job at the post office and meet a nice girl,” he says.

Bradley is the fourth postal clerk in a row to be handed the reins of the Goodland Post Office. Judging by the last two, he may not be here long. Judith Pritchard was Goodland’s last postmaster. She was popular here and served faithfully for eight years until her retirement on July 31, 2012. Due to budget deficits, the U.S. Postal Service (USPS) has since cut back on personnel and closed some offices. Goodland was spared, but instead of a postmaster, a series of postal clerks 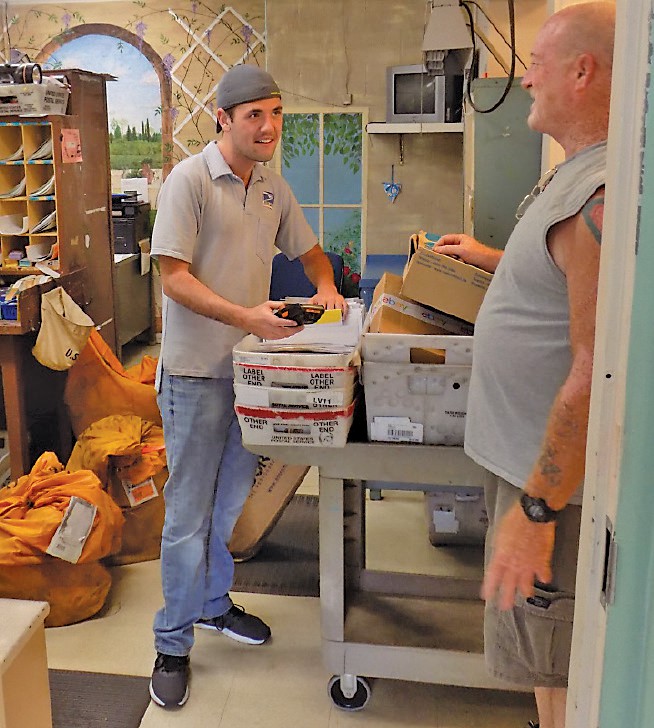 have run our post office. When allowed to do their jobs, they have done well. The last two clerks, Rhonda Joyce and Asiel Rodriguez both performed well, but were frequently called up to the Marco office to help out during business hours. (See “Goodland PO Resumes Full Service,” published 4/7/16, at coastalbreezenews.com.) This resulted in late openings in the morning and closures during the day at Goodland. In the absence of the clerk, residents could not transact post office business. On those instances, which were frequent, sometimes daily, the day’s mail would often not appear in PO boxes until the afternoon; Saturday’s mail sometimes would not appear until Sunday.

In an apparent attempt to remedy this situation, Marco Postmaster Michael Gomez sent the newly hired Asiel Rodriguez to Goodland, with the assurance that he would be working full time at the Goodland Post Office. Unfortunately, starting in December 2016, Rodriguez, as clerk Rhonda Joyce had to do the year before, continued the pattern of being AWOL from Goodland, when called to the Marco office. Now Rodriguez is gone and in his place comes the young and eager Bradley Davis, the latest in a line of clerks expecting to be able to give their full attention to the Goodland Post Office. We’ll see.

Postmaster Gomez has not returned calls requesting his comments on this article.