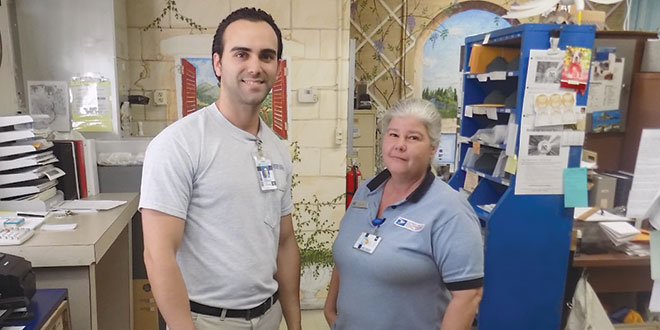 Asiel Rodriguez and Rhonda Joyce, during training. Asiel was hired in February to work full time at the Goodland Post Office. Photo by Barry Gwinn

The Goodland Post Office is where Goodland residents meet and greet each other every day. It has served as our de facto social center for over 50 years. It’s where we learn what is going on in Goodland and a big reason why we love it here. We could always depend on the Post Office – until January of this year.

Rhonda Joyce, a perky mother of three took over as our postal clerk when Marie Thompson retired in October 2015. Rhonda, who lives in Cape Coral, was hired by the Marco Island main post office two years ago. In spite of her long daily commute, she must have impressed the postmaster, because he sent her down to take charge in Goodland, when Marie Thompson retired. As Goodland Civic Association secretary, I loved working with her. Rhonda handled the Christmas rush with aplomb and was getting to be rather popular in the community. Then, in January 2016, she started disappearing from the post office at mid-day – sometimes for more than an hour and a half. The counter door would be locked and a sign announcing “Emergency, be back in an hour” appeared. Persons with packages or other post office business had to turn around and go home. As complaints mounted, Greg Bello, President of the Goodland Civic Association (GCA), contacted Postmaster Michael Gomez about the situation.

It turned out that Rhonda was on loan from the main post office and was obligated to fill in back there when necessary. To remedy this, in mid-February, Asiel Rodriguez was hired specifically for the Goodland Post Office. As such, he is not subject to being recalled to fill in up in Marco Island. After being trained for a couple weeks, Asiel took over for Rhonda in early March. Asiel lives with his wife and two children on Marco Island. He came over with his parents when they escaped from Cuba by boat. Asiel is eager to become a part of the community that he serves. He is pleasant and eager to please. “I have enjoyed this little laid back town,” Asiel told me, “People were nice and friendly and welcoming. I have enjoyed talking to them. I came here to do what I am supposed to do and intend to treat the people as they have treated me. As soon as I can (A baby boy was born a few weeks ago) I want to come to Town Meetings and become active in this wonderful place.” It looks like Goodland is lucky to get him.