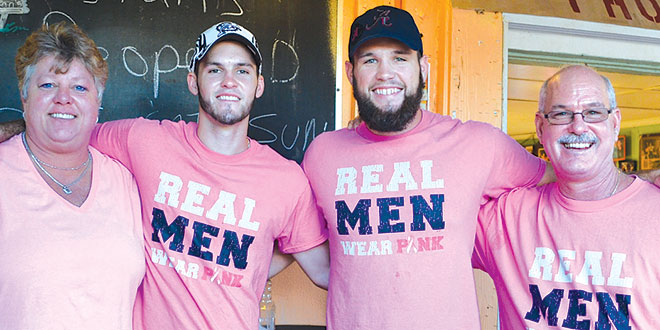 It was a sea of pink as far as the eye could see at Stan’s Idle Hour on Sunday, Oct. 26, where Salon and Spa Botanica of Marco Island came together with the small community of Goodland to host their second annual Pink Hair for Hope fundraiser to benefit the National Breast Cancer Foundation.

The usual “Sunday Funday” crowd drawn to Stan’s joined in the day’s activities, entering raffles and sporting pink hair extensions provided by the salon team — all of which were present and decked out in head-to-toe pink.

“They did it last year,

and it went over really well. So we just thought we would jump in and see what we could do. We want to help out in any way we can. It’s fun! Everybody’s wearing pink, and it’s just really cool,” said Steve Gober, Stan’s Idle Hour owner.

The hard-working team at Salon and Spa Botanica couldn’t be happier; they surpassed the $3,500 they raised last year, just as they’d hoped. Sunday’s successful event alone raised $1,900, boosting this year’s total funds collected to the $4,500 mark as of Oct. 27. They expect the final count to be even higher.