Goodland is for the Dogs 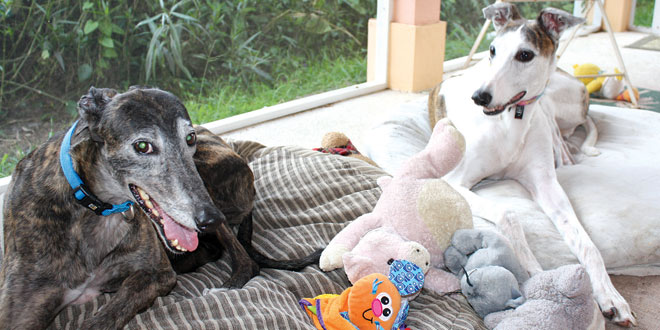 Dogs are never lost in Goodland. And it’s not just because our island is only .6 square miles with the only way of getting out being a long and winding road. It’s because they have great homes that they wouldn’t want to leave. Dogs in Goodland are never lost, but they are found.

There are countless stories of Goodlanders who have found or rescued dogs in the most peculiar ways. These dogs become constant companions and are forever grateful for being saved of an unsure life. So, I thought I’d share a few of these stories.

Chai
Denise’s dog Rose was in the later half of her teen years; an older dog with an even older soul. She was Denise’s constant companion for all those years. The day finally came where Denise had to make the decision to put Rose to rest. It was devastating. How do you say goodbye to your best friend? It’s never easy.

Rose moved on to doggie heaven, and by pure accident, Denise moved on to meet Chai. On the way home from the vet, Denise and Margie, who had gone with for moral support, spotted a small chihuahua mix on the side of the road. They stopped the car and coaxed the dog over. She was a little frightened but eventually came to them. They took her home and she has been in Goodland ever since.

Chai is now a permanent part of Goodland and is a little spitfire! She protects her home, all 15 pounds of her and loves to play with other dogs that are five times her size. She gives all humans around lots of love while still letting them know that she’s the real star of the show. Chai helped Denise through her grieving period over Rose and gave her someone to look after. Maybe 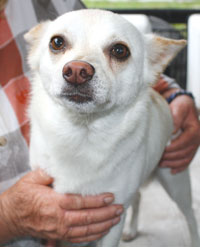 it was really Chai who found Denise when she needed it most.

Lucy
It was on an Easter Sunday about five years ago. As we all prepped for a nice dinner at our friend Judy’s house, I received a startling phone call from her. On her way out of town, Judy found a dead dog in the middle of the road just on the other side of the Goodland Bridge leading to US-41. She couldn’t leave it, so she put it in a plastic bag, got it into her van and brought it home.

In hysterics, she called me asking what she should do. I rushed right over. The dog was small and terrier-like. It was definitely a mix. I really didn’t know what to do, but I had lost a dog in the past and the vet told me to bury it, bring it in for cremation or throw it away.

“Throw it away?!?!?!” I remembered thinking in horror, but in this scenario I didn’t know what to do. We can’t dig very deep in Goodland, being that the island is a shell mound and we certainly didn’t have spare change to have it cremated. So I did the only thing I could think of. I picked up the dog in the plastic bag, closed it up and put it in the trash for pick up the next day. I felt awful. It was a somber Easter to say the least.

The next day I came home from work and was greeted by the entourage of the three dogs we had at the time: B.B. Wrinkles, Stella and Lulu. But wait… there was a fourth dog! Holy s#&%!! It was the dog I threw in the dumpster the day before! It wasn’t even dead, and I just threw it away!

No one was home so I 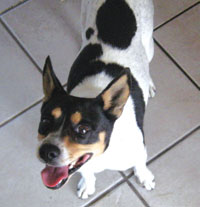 frantically started making phone calls. As I called Jenni, my roommate, she just started to laugh. While it really wasn’t a funny story, it was funny because Jenni knew I would react in such a way. The dog in the house wasn’t the deceased one I threw away, but likely its sibling. She was found tied to a tree with a bag of Old Roy dog food dumped out next to her in the same area where the dog from the day before was found.

Our good friend, Ali, took her home, named her Lucy, and Lucy has stuck by Ali’s side like glue ever since.

Scorcher and Rose
Retired racers, Scorcher and Rose were rescued by Judy after having spent their younger years at the Naples Greyhound Track. Judy chose to rescue Rose first, who was three and a half at the time; now she’s 11. Scorcher came to her next at the age of three and he is now nine. “They needed help,” says Judy. “They had a terrible life, and they are such wonderful dogs. They just needed a second chance.” Both dogs, as all greyhounds live, were left in small cages, only to come out during race time. Scorcher, a racing champion and Rose, who did the best she could, are now mellow dogs who sprint about once a day. After that, Judy says, they just hang out, play with their toys and enjoy the company of their Jack Russell sibling, Rojo, and their two cats, Simon Rosende and Spike Jones.

Karma
The latest dog to be rescued by Goodlanders is Karma. She came all the way from Ohio to find her forever home. Found on the side of the road in Columbus, Karma was only three months old; she was skin and bones and suffering from the puppy virus, Parvo. Jenni, 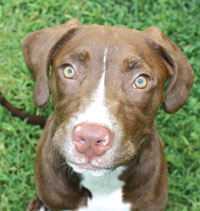 my old roommate here, moved to Columbus and that is where Karma’s Goodland connection began. Two days after B.B. Wrinkles, the dog Jenni gave me, was laid to rest, Karma was found. It also happened to be B.B.’s sixth birthday. Jenni felt that inside Karma was B.B.’s spirit coming to say goodbye to her. Hence the name Karma.

A recent road trip took Josh and me all the way to Columbus to see Jenni. With no intentions of leaving with a dog, we did. That’s just how Jenni is – she keeps giving me dogs! And she gave Lucy to Ali and another dog, Lulu, to our friend Eva. As Eva joked, “I’m getting my dogs from Jenni from now on. Lulu is an angel and my other two dogs are devils!”

So far, Karma has been an angel, too. She’s helped us heal after the loss of B.B. and she is so smart and cute sometimes I just can’t handle it! She buries her toys in the dirt, loves to have her tummy rubbed and could entertain herself all day long as she learns new things about this world and Goodland. She’s right at home here and she knows it. We sure are happy she found us.

Then there’s other rescue dogs like Yoda, Bella, T-Bone, Molly, Sampson, Zeppelin, Munchkin as well as cats galore that have found us somehow and in a way, saved us too. Just as I said earlier, dogs (and cats) are never lost in Goodland; they are found.

Natalie Strom has lived in Goodland for five years and has worked in Goodland for over eight years. She was crowned Buzzard Queen at Stan’s Mullet Festival in 2009 and is a founding member of the Goodland Arts Alliance. Natalie is a graduate of the University of Iowa and Editor of the Coastal Breeze.