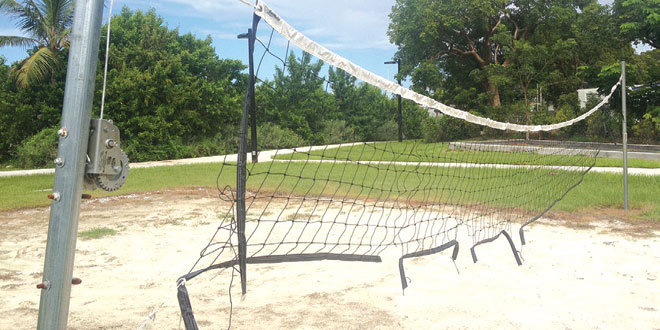 When I was in about sixth grade, I snuck out of the house in the middle of the night with three of my friends to spray paint the under side of a bridge. A small creek ran through a wooded area of our upper-middle class neighborhood and then underneath a major roadway. Other kids had spray painted there before us. It was hidden away from the public eye, only to be seen by the younger kids who played hide and sneak and make-believe in the area as we once did.

The whole idea seemed so bad and dangerous; there was a certain thrill to it. We were out of our houses; free to roam the safe streets in the middle of the night. We walked down the creek and made it to the bridge. I heard the other girls shake their cans and begin to spray. I shook my can, took aim, and sprayed right back at my own hand. I had caught myself blue-handed. That was enough of illegal spray painting for me; I inadvertently taught myself my own lesson.

I bring this up because there has been some unsettling happenings in Goodland lately and I do believe it is the youth in our small town that may need a bit of a “Come to Jesus” moment. I mentioned my spray paint story in particular because someone, and I don’t know who, thought it would be a good idea to spray paint the word SAUSAGE across a wooden park bench at MarGood Park. (I would assume an adult would come up with something a little more witty.)

Stroll through the park and you’ll see the volleyball net which was purchased with tax payer’s money to give the youth of Goodland a positive activity to try. Well, not anymore. The net is pulled apart and the poles are bent in because children have been hanging on it as if it were a toy. 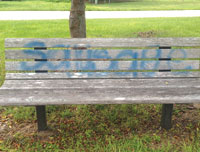 story of late is of a group of teenage boys that attacked another boy in town and stole his skateboard. The boys were in a two-toned blue Ford pick-up truck with a license plate that started with the letter I. (I have the full license plate number and will be happy to reveal it to the police if there are any more problems in the future.)

The boys in this pick-up truck, which has not been seen in Goodland since the incident, stopped, grabbed the young man by his shoulders, pushed him to the ground, stole his skateboard and drove off, kicking him as he tried to pull his skateboard out of the car. Luckily, an adult saw the incident and ran after the boys who then threw the board out the window.

In true Goodland fashion, the boys were stopped and scolded and told never to come back to town. It was clear that these particular trouble makers were from elsewhere. That is, until one snot nose sitting in the bed of the pick-up yelled, “but I live in Goodland.” The response, “Well then move somewhere else!”

I feel the same way. If you want to destroy our town, its park and its reputation, then you can go right ahead and leave. It goes for adults as well. But the adults have more of a sense of appreciation of where they live. Their house isn’t their home; Goodland is their home. Just as we treat our homes with respect, we should treat our village with respect. It’s more than just some .6 square mile piece of land; it’s our town, something we connect to much deeper than any cookie-cutter neighborhood where one house blends into the next. Our home – our island – is special and should be treated as such.

After all, Goodland does a lot for its kids. As they get older they are employed by local establishments, and there’s even a Goodland 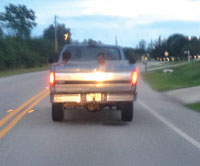 Scholarship Fund for graduates. The Goodland Civic Association looks out for their best interest when it comes to the county and the Goodland Arts Alliance is working towards an arts and education center in MarGood – the park that’s been vandalized. Children here are treated with respect by the adults in the village and are given the chance to explore and enjoy the island at their choosing. I would hate to see them ruin that trust and respect.

I realize that most kids don’t read the newspaper and I also realize that there are a lot of wonderful kids in our town, many that I like and enjoy spending time with. I hate to publicly chastise whoever the guilty party is for making stupid choices, but how else do they learn? With a rub on the back and an “it’s ok that you acted like an idiot?” I don’t think so.

We’ve all lived through middle school and high school, and we’ve all made stupid mistakes. Spray paint and a volleyball net are one thing, but bullying and stealing are another. So if you are the parent of a young man with brown hair that drives around a two-toned blue pick-truck with a license plate that starts with the letter I, you might want to have a talk with him. Let him know that Goodland doesn’t want his kind around. Tell him to go steal from someone else because you won’t get away with it here.

And that goes for spray painting and destruction of property as well. Got it? Good. Because this is the first negative article I’ve ever written about Goodland, and it pains me.

Natalie Strom has lived in Goodland for five years and has worked in Goodland for over eight years. She was crowned Buzzard Queen at Stan’s Mullet Festival in 2009 and is a founding member of the Goodland Arts Alliance. Natalie is a graduate of the University of Iowa and Editor of the Coastal Breeze.[/author]