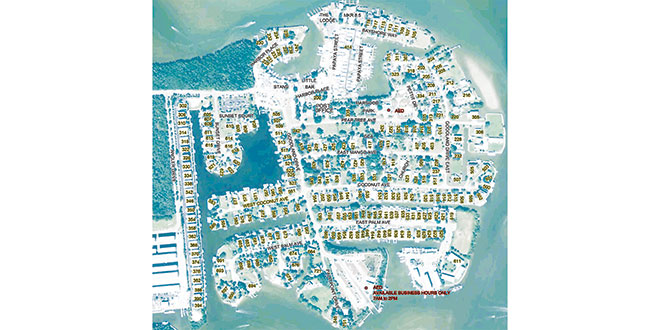 The Goodland Civic Association (GCA) really cares about the well-being of our residents. The GCA actually does something about it. The following is one such story. There are others, but none involve life and death like this one.

Theresa Morgan is a personal friend of mine. She also sits on the board of the Goodland Civic Association and puts in countless hours of community service here. In her spare time she runs a thriving CPA business, which among other things, does my taxes. She has spearheaded the effort to coordinate with Collier County, and educate Goodlanders about the AEDs (automated external defibrillator) in Goodland.

An AED is a portable device that checks the heart rhythm and can send an electric shock to the heart to try to restore a normal rhythm to a heart that has gone into sudden cardiac arrest (SCA), a condition that usually causes death if not treated within minutes. According to the National Institutes of Health, each minute of SCA leads to a 10 percent reduction in survival, so using an AED on a person who is having SCA may save the person’s life.

I asked Theresa to give me a summary of the successful drive to obtain AEDs for Goodland, and then to educate Goodlanders on their use. I can do no better than to quote her reply, which follows:

In April of 2014, GCA President (and physician) Greg Bello invited Collier County EMS to come speak at the association’s monthly meeting regarding the merits and use of AED devices. Noemi Fraguela, AED Coordinator for Collier County, came and gave a fascinating presentation – laced with humor and hard facts – leaving all in attendance wishing they had one of these devices in their homes! Greg’s invitation to Noemi Fraguela had a purpose – he believed that it was critical for the Village of Goodland to have one or more of these devices available to the community, as we are a distance from Marco Island EMS, and like much of Collier, have an aging population. We learned at that presentation that, in an emergency situation, a life is much more likely to be saved if measures, including possible use of an 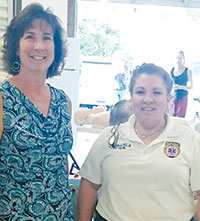 AED, are taken while waiting for the ambulance to arrive. So, in the aftermath of the compelling presentation, the GCA board decided to pursue this endeavor.

Fraguela diligently navigated the involved departments in Collier County, enabling the placement of not just one, but two AED devices in Goodland; one at the county boat ramp and the other at the county’s Margood Park.

Following placement of the devices, Fraguela and her team returned to Goodland to give two AED and CPR (cardiopulmonary resuscitation) general training classes – enthusiastically attended by over fifty Goodlanders. Attendees at the class were offered the opportunity to sign up for the AED ‘call list’ – meaning that in the event of a cardiac emergency, a call goes out to everyone within 1,200 feet of an AED device, in hopes that life-saving measures can be applied. Unbelievably, such a call went out just a few days after the first class. Less unbelievably, over ten Goodlanders responded and arrived well in advance of the ambulance! What a village!

Wait, there’s more! That first emergency brought to light a different problem. The historic old homes in Goodland are not well marked. Because of this, even the ten neighbors who responded had difficulty finding the address! Undaunted, Bello and fellow Goodlander, Glen Lester, performed a Village-wide reconnaissance and created a general mapping format which was presented to the community at an association meeting, along with a call for volunteers to help digitize and refine the map. Well, Goodland being Goodland, neighbor Justin Brown stepped up, and with his mapping software created a digitized map of every home on the island, ready for laminating and presenting to our call list volunteers. Even EMS requested a copy for distribution to ambulance personnel.

Thus ends the saga of the Goodland AED project. Timeline: one year, start to finish. So, perhaps you are thinking, “isn’t it great how a community can come together.” Well, it’s true, but that’s Goodland folks. That’s how we roll.