Goodland Gets Its Own Flag 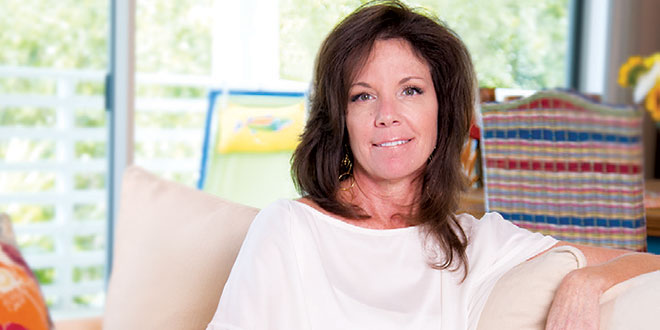 Sherri at her desk.

On November 18, 2015, the Goodland Civic Association (GCA) Board of Directors authorized the design and manufacture of an “official” Goodland flag. The board was willing to make a substantial investment and was betting heavily that a large number of Goodlanders would buy a flag or two for display either here, or at their northern residence, or both. This is exactly what happened and the orders keep coming in.

To date, 66 flags have been ordered and about 51 have been sold. I have one in front of my house, and the condos that I live in have one under the U.S. Flag on Goodland Road. The flags are double-sided and come in two sizes – 3’x5’ and 2’x3’. Four of the larger flags were donated to our popular restaurants – Stan’s, Little Bar, Olde Marco Lodge, and Marker 8.5. A fifth flag was given to County Commissioner Donna Fiala at a Goodland Town Meeting

Goodlanders work in and come from a full spectrum of employment areas. By a real stroke of luck, we have a top-notch graphic designer in Goodland who is active in the community, and a soft touch for the GCA and Goodland Arts Alliance (GAA) when pro bono work needs to be done. This would be Sherri Morrison, who runs Creative Designs out of her Goodland residence. She has a solid client list in Naples and on the Island, but drops everything when the GCA or GAA come calling. She has done all of the design work for the GAA, and now has come up with a beautiful flag for the GCA.

Sherri grew up in Amarillo, Texas, and in 1992, earned an associate’s degree in Graphic Design from Amarillo College. Before she could continue on for her bachelor’s degree, she got a full-time job at an Amarillo ad agency, and has 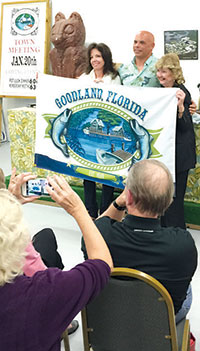 been working ever since. She met her husband, Jim Freeman, at the ad agency and they have been together since that day. Jim is another Goodland story. His colorful seascape photographs are popular here. He too works out of their residence, and runs Jim Freeman Photographers, which engages mostly in architectural photographs for builders. Sherri and Jim vacationed on Marco Island in 1999. In 2002, after successful jobs with a Naples, and then a Marco ad firm, Jim convinced Sherri to start her own firm, which has become quite successful.

In mid-December, 2014, Greg Bello, the President of GCA, asked Sherri to design an appropriate flag for Goodland. Greg was familiar with Sherri’s work, and left the design completely up to her. Sherri got right on it, and within about a week came up with the design. The GCA board quickly approved it, and the first order for the flags went in.

Sherri began by having Jim take a 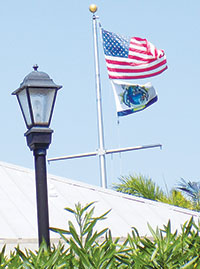 picture of the Goodland sign at the confluence of Goodland and San Marco Roads. The origins of this sign are murky and will probably pop up in another column. The sign was there way back in 1999, and was already in bad shape then. It has recently been refurbished. Sherri imported Jim’s photo into her computer, and using her Creative Design applications, set to work. The primary colors incorporated the blue of the sky and water, along with the green of the mangroves, all of which envelop and surround Goodland. The flag has proved immensely popular, and is flown with pride in front of many homes here.

Anyone wishing to purchase a flag should contact Barry Gwinn at 239-642-7935 or bgwinn@comcast.net.