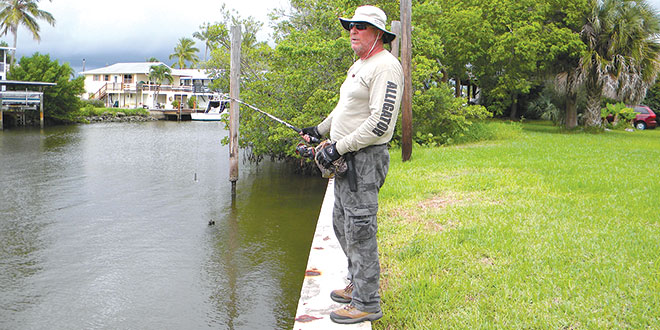 ‘Ray the Trapper’ attempts to snag the Goodland gator, who made no appearance that day. PHOTOS BY MELINDA GRAY

There’s a new predator in town, and he’s causing quite a stir.

An alligator rumored to be at least eight feet long has been trolling the canals and causing unease amongst Goodland residents. Buzz about frequent sightings has been swirling for a few weeks now, but following a recent uncomfortably close encounter, a call notifying the Florida Fish and Wildlife Conservation Commission was placed. On Aug. 4, Ray Simonsen Sr., one of Collier County’s four nuisance alligator trappers, came down to assess the situation.

“With the influx of fresh water sheeting, and the end of alligator breeding season, it’s common for them to come closer to saltwater if they have sustained wounds fighting for territory or a mate,” said Simonsen.

There is now a 45-day permit on this particular alligator, but many times reports aren’t made because people equate calling the FWC to signing that animal’s death warrant. Simonsen said he doesn’t kill the animal unless 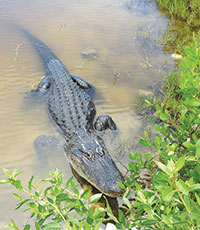 Working around so many alligators has desensitized me to some of the panic, but how can I not respect a big guy like Creepy, pictured here at Corey Billie’s Airboats?

it’s absolutely necessary. His class 2 license allows him to transfer a live animal to a farm, facility or attraction that can house them in a confined area; he deals with an alligator farm in LaBelle.

This may just ease the minds of residents and visitors at Calusa Marina, who have also had a few unnervingly close calls. Jamie Oglesby, a self-employed boat cleaner, does much of his work underwater at the marina. He said that there are two alligators that have been coming and going for months, but now the encounters are getting more dangerous.

“I’ve been diving with it in the water for a while, but I’ve seen people feeding it, and now it’s starting to come over and check everyone out,” said Oglesby.

Of particular concern are children playing in or around the water. Oglesby reported that recently the alligator approached two children who were playing on the boat ramp at Calusa Marina. 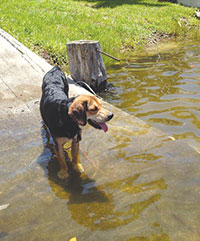 I keep a watchful eye on the water as my children swim in the canal behind our house.

fish guts, and they’re not supposed to; and if you’re feeding the fish, birds and turtles, then ultimately you’re feeding the gators,” said Simonsen. “It’s against the law. It’s a misdemeanor felony to feed the wildlife, especially gators. The FWC is cracking down on it, and they should. It’s going to put someone into serious jeopardy.”

I admit, at high tide, my kids love to swim right around our boat; it’s one of the only ways we’ve found to beat the heat here. Needless to say, I’m not quite as comfortable with that as I once was.