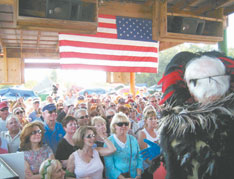 As a former Buzzard Queen at Stan’s annual Mullet Festival, I feel as though it is my duty to inform the uninformed about this one-of-a-kind event. Not to be outdone, the annual Goodland Boat Parade is approaching fast on the Mullet Festival’s heels. Don’t forget about the Goodland Civic Association’s Pancake Breakfasts and the Goodland Garage Sale that are also just around the corner.

Let me start by explaining the Mullet Festival, now in its 28th year. No… it has nothing to do with the “business in the front/party in the back” haircut but it has everything to do with the mullet fish. This is the fish that originally made Goodland the “Drinking Village with a Fishing Problem” that it is still known for today. Early settlers to the Goodland area once net-fished for mullet as a way of life. The fish can be smoked, fried or used as bait. Every year, Stan and his crew (and really all of Goodland) celebrate the fish with an elaborate festival.

The party kicks off on Friday, January 27 at 6:00PM. Jeff Hilt and the Stampede Band will take the center stage and perform until about 11:00PM. 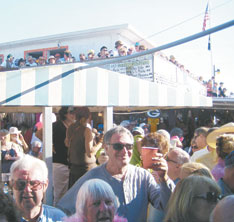 Saturday will feature the band Hot Damn on the center stage from 12:00 to 7:00PM. There will be a fish cleaning contest at 3:00PM and the Buzzard Lope Princess Competition will be held at 4:00PM. Sunday, always the busiest day of the festival, will feature the Buzzard Band with Stan, himself, as emcee. The annual Buzzard Lope Queen Competition will begin at 4:00PM. There is no pre-registration necessary to run for Buzzard Lope Princess or Queen. Just show up in your fanciest, feathery get-up and do the “Buzzard Lope” dance for a chance to have your name go down in history.

Along with their regular menu, fried and smoked mullet will be available to try for attendees. The Marco Island Fire Department will be grilling hot dogs and bratwursts to go to a good cause. Jerry Adams, a member of the force since 1989, will be receiving the proceeds of these sales to help him and his family as he is currently fighting a very aggressive form of cancer. Local vendors will be on hand selling their food and arts and crafts. The Island Woman will be open through the weekend selling anything from 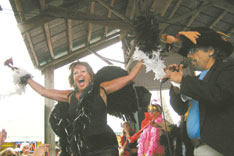 high end jewelry and clothing to wacky hats and sunglasses, and of course, all things Stan’s.

As a Mullet Festival regular, I advise on arriving with a hearty breakfast in your stomach as those delicious Buzzard Punch drinks can knock you on your you-know-what if you aren’t careful! What better way to please your palate than to attend the Goodland Civic Association’s Pancake Breakfast. It will take place both Saturday and Sunday at the Goodland Community Center at 417 Mango Avenue from 8:00- 11:30AM. A raffle will also be held where winners will receive gift certificates to local restaurants.

The Goodland Civic Association will be hosting a second Pancake Breakfast on March 3 and 4 to coincide with the annual Goodland Garage Sale.

The 16th annual Goodland Boat Parade is approaching even sooner than the garage sale. Mark your calendars for February 18 at 2:00PM, but get to Goodland much sooner to save your seat at any one of the local restaurants or at the new Goodland Boat Park. The Boat Park will be closed to boaters that day to leave plenty of room for parking. Volunteers will also be present at the park selling soda

and hot dogs. All proceeds from the day will go to the Marco Island Chapter of Avow Hospice. The local restaurants in town often engage in 50/50 raffles and other types of fundraising to help benefit Hospice.

The theme this year is “The World of Dance.” Decorate your boat in any style of dance you find fitting – the can-can, salsa, clogging, mexican hat dancing, line dancing and the list goes on. Whatever dance you choose, make sure to register your boat ahead of time. Call Elaine Richie at 239-642-8356 for a registration sheet or for any other questions you may have about the event. You may also visit www.mardigrasgoodland.com to learn more. Last year, over $18,000 was raised for Avow Hospice on this single day.

These fun-filled events promise to make even the grumpiest of folks grin, if only for a moment. So get on down to Goodland where the party has already started!