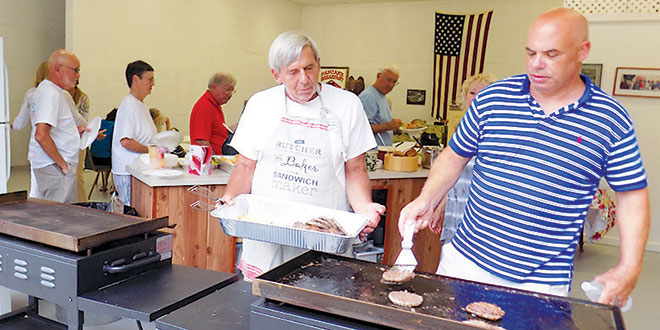 The GCA was incorporated on May 2, 1978. Its by-laws call for a meeting, open to the public, to be held every third Tuesday of each month, from October through April. It meets in the Goodland Community Center, at 417 Mango Ave. After April, we get to leave town or do some serious recreating. For as long as I have been on the board, we have faithfully adhered to this schedule. In addition, we have a potluck supper before each meeting, featuring specialties and delicacies of our members. These guys are good. Most of the time, this is much better than eating out and always cheaper.

When I became GCA secretary in March 2008, the attendance at meetings was sparse and sometimes controversial. I am told that in the late 90’s GCA membership was north of 300. I have not confirmed this but know that 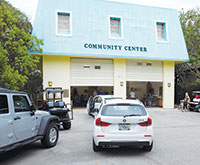 Folks start to arrive at the Community Center.

by March, 2008, it had plummeted to 112. This was due to warring factions on the board, which alienated a lot of the Goodland community. I witnessed some of this first hand. The members had lost faith in the GCA and didn’t renew their memberships. It is hard to blame them.

Starting in 2008, under the successive presidencies of Mike Barbush, Joanie, Fuller, and Greg Bello, the warring factions were dealt with and the board was stabilized. We were finally able to pull together and start addressing pressing community concerns. Collier County came on board and good things started happening. The community gradually recognized that things had changed drastically for the better. Since 2008, our membership has more than doubled. It now stands at 238 and counting. The response has been both encouraging and heartwarming to the GCA Board. It seems like the Goodland community is aware of

and approves of what the GCA is doing.

Even so, attendance at our monthly potluck suppers was sparse. Not realizing how lip smacking good the food was, our members would arrive only for the town meeting, which followed the supper. The lowest attended supper has traditionally been the last one of the season. This year our membership came early and stood in line to break bread with their neighbors. The last supper was the best attended of the year.

The GCA has always counted on our wonderful restaurants to help us out with special events. It is unusual that a community with a permanent population of about 400 would have four restaurants, all of which are known throughout southwest Florida for their entertainment and cuisine. This year, some of this delicious restaurant food started making its way to our potluck suppers.

At our February 17 supper, Amy Bozicnik of the

Little Bar, brought over a huge bowl of peel and eat shrimp, with cocktail sauce. On March, 15, Chef Mike Duncan of Marker 8.5, came over with a large tray of delicious corn beef and cabbage. On April 21, our last meeting, we grilled up remainder of hamburgers (left over from our community picnic) , provided by Shelly Ballante of Olde Marco Lodge.

I have to also give some credit here to a couple of Goodland gals, who have never failed to provide a couple of tasty and well regarded tasty dishes for each of our potluck Suppers.

Linda Van Meter always brings one of my favorites. It is a concoction of rice and sausage in a tomato sauce. I suspect there is a hint of Michigan in this dish. We know that whatever the turnout, because of Linda, we will always have enough good food. Linda has been

Line forms on the right.

doing this since I came on Board in March 2008.

For the past two years. Nancy Gwinn, my lovely wife, has sent over a heaping helping of south central Pennsylvania potato salad. She can’t always make the meetings but never fails to sweat it out in our kitchen at home using her own recipe for this touch of old rural Pennsylvania.

And so we look forward to the coming year, starting in October, 2015, we anticipating larger crowds and more and tasty dishes at our potluck suppers. People are discovering what I have known for years. At dinner time each third Tuesday, the place to be is with your neighbors at the Goodland Community Center.