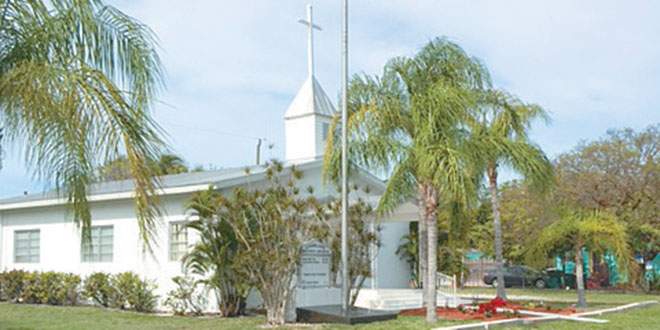 Photo by Natalie SiavrakasThe Goodland Baptist Church – Who wouldn’t beglad to have this as part of their community?

I moved to Goodland in 2006. It wasn’t until 2010 that I realized that in addition to our restaurants, marinas, and merchants, we had a beautiful little church here – the Goodland Baptist Church. Until May 5, 2016, none of the day visitors to Goodland or the passersby on San Marco Road would have known this either. Unless one happened to stumble across the church, there was 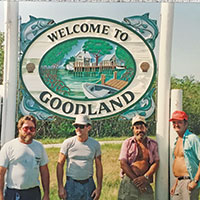 no way of knowing of its existence here. The Goodland sign on San Marco Road made no mention of it. That sign has been there for over 20 years; the church, since the mid-fifties. In a recent campaign to revitalize the church, congregants approached the Goodland Civic Association (GCA) board members with a request that the word “Church” be added to the sign. Many of these congregants are members 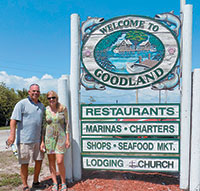 Photo by Barry GwinnGoodland has a church! Greg and Cindy Bello makean addition to the San Marco Road sign.

of the GCA. The GCA board saw the justice in this and hired Kevin Hauke (“The Sign Artist”) to devise an appropriate addition to the sign. Hauke had designed the original sign in about 1995. To his knowledge, the church was not mentioned. On May 5, 2016, Greg and Cindy Bello added Hauke’s handiwork to the sign, removing the words “R.V. Park” to make room for it.