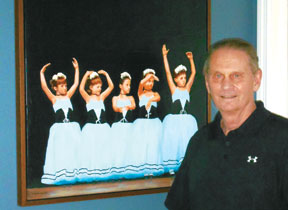 David Fuller, an award winning artist who has lived in Goodland for over five years, opened his one man show in the West Wing Gallery of the Naples Regional Library on November 1. The show will hang all month in Old Naples at 650 Central Avenue. Hours are 9:00 AM to 7:00 PM, Monday through Thursday, and 9:00 AM to 5:00 PM on Friday and Saturday.

David has two aspects to his show. First, he is exhibiting some of his acrylic paintings which are in the narrative style and depict poignant scenes from everyday life.

David likes to say his mentors are Norman Rockwell and Andy 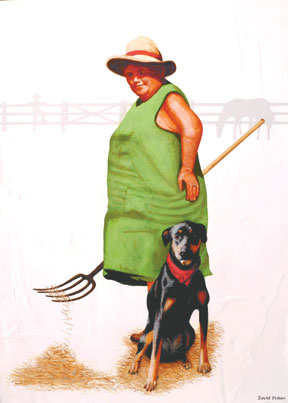 “A Woman’s Work Is Never Done”

Warhol. He tells stories in his paintings and adds bold colors as well in his own interpretive style.

Also in the show are his new Wildlife North and South first edition digital prints which he designs on his computer from his photography. The large prints are limited edition, signed and numbered. The small prints are unlimited. One example is South Florida’s beloved Roseate Spoonbill which he photographed last May in the decaying mangrove area on San Marco Road. Enhanced and manipulated by computer, Regal Rosie is more beautiful than ever.

A young David studied art at the High Museum of Art in Atlanta, Georgia, but was distracted from art to 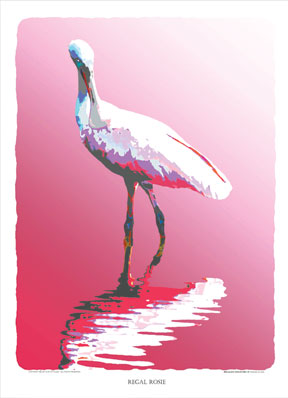 pursue an engineering degree from Georgia Tech and a business career as well as marry and raise a family. After moving to Goodland he reacquainted himself with his brushes and easel and became very active in the Naples Art Association.

He was featured in one of their exhibits at Physicians Regional Hospital in 2011 and has won two awards in the Member’s Gallery shows at the von Liebig Art Center.

David divides his time between Goodland and Homer, Alaska and has a studio in both places. His art is featured in the Fireweed Gallery in Homer and primarily at the von Liebig Art Center in Naples.

David can be reached by email through his website: www.davidfullerart.com