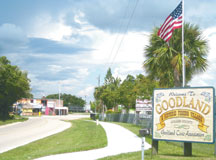 As my personal interest in the history of Goodland has grown, I have heard some pretty interesting things about our fishing village. Recently, a neighbor of mine showed me a brochure she had saved from the mid-60’s featuring land for sale in Goodland. In my attempts to find out more about this brochure, I found that it’s not always that easy to find what you’re looking for. Thanks to this nagging brochure, which I was unable to find any information on, I have gathered a bit of history from many sources and conversations. And so, I submit to you, my “end-of-season-term-paper.” I hope I get an A!

According to Goodland’s own website, www.goodland.com, “Johnny Roberts is believed to have founded Goodland in the late 1800‘s. He named it Goodland Point because it featured a 40-acre shell mound left by the Calusa Indians that was ideal for growing fruit and vegetables. It was also a great location to fish.”

In a 2006 historical assessment report for Collier County Parks and Recreation, Panamerican Consultants, Inc. of Tampa reports that Roberts, along with John Graham and Wellington Payne, formed the Tropical Fruit and Vegetable Company, making good use of the fertile soil. “In the 1890’s the company’s land was sold to Samuel Alexander Pettit, who farmed the land as well.”

Collier began purchasing land in Southwest Florida, including Marco Island and Everglades City. As he continued to develop these areas, the Florida legislature named the area Collier County, in 1923. With over a million acres owned by Collier, Goodland was one of the few holdouts as Pettit did not sell his land.

As he continued farming in Goodland, “Pettit also sold shell from a large prehistoric midden as road material,” according to Panamerican Consultant’s report. Those shells were also used to build “the curvy road,” the only road that leads in and out of Goodland. Multiple sources credit Pettit’s son, Harry, as the sole-builder of the curvy road. The road was built shortly after the Goodland Swing Bridge became operational in 1938, giving the first bridged access to Goodland and Marco Island.

Collier County Clerk of Court Plat Books describe how the Pettit family quit farming and divided the land into the “Pettit Subdivision” in 1947 and “Goodland Heights” in 1949. This was the same year that cottages from the Caxambas area were moved to Goodland. The book “I Remember Marco: A Tale of Two Villages,” by Virginia Carlin highlights many personal experiences regarding the move of these homes. Henry Lowe shares his memories through her book. “Goodland wasn’t established until 1948. The Barron Collier family intended to develop the Caxambas area. There were

enough people there who had built a nice community – a store, post office, school, small theater. They were good solid families – people who had been there for many years, some had been fishermen, and some were left over from the cannery days. The Barron Colliers offered to move their homes, without cost, and set them up on their property, if they would buy a lot in Goodland. It seemed that just overnight Caxambas, as it was known, was no longer there!”

Just as Caxambas was vacated, Goodland became a small village. The post office in Caxambas moved to Goodland and Katherine “Kappy” Kirk, a name that needs no introduction to Goodlanders, became Postmaster. The book, “A Girl Called Tommie,” co-written by Katherine Kirk and Elizabeth Perdichizzi, mentions the “Ship Ahoy,” an old houseboat that Tommie Barfield, Kappy Kirk’s aunt, salvaged and moved to Goodland. “It had eight sleeping rooms, bath facilities, and a large room in which to eat. Tommie gave it to Elsie (her daughter), who had married Kenneth Vogstad. ‘Goodland needs a small hotel-inn. This might be just the thing. What could be more appropriate for a fishing village than a restaurant-inn made out of a houseboat?’ (Tommie) said to Elsie and Ken.” By 1950, “Ship Ahoy” was up and running in Goodland. Unfortunately, Hurricane Donna of 1960

destroyed the “Ship Ahoy” and caused immense damage to much of Goodland.

Around the same time the “Ship Ahoy” was up and running, the Goodland Cash Market was built. According to Elmer Pettit, “Grits and Ken Vogstad… wanted me to run the Goodland Cash Market for them. So that is why I worked in Goodland. The building was not brought over in the ’49 move, it was built there. It was a pretty good size store and had a post office in the back. Kappy was Postmaster then. I ran that for them for about four years, we lived in the apartment in the back of the store.” Elmer tells his tale in “Island Voices: They came to Marco Island,” authored by Elizabeth Perdichizzi with Katherine Kirk. The Goodland Cash Market eventually became a part of the Little Bar Restaurant. Owned since 1978 by brother and sister, Ray Bozicnik and Nicolette Bauer, the Little Bar Restaurant serves lunch and dinner seven days a week (except when they’re closed for the summer).

Next came Rex and Ruby Johnson. They bought up land in Goodland and “by 1952, the Johnsons had established MarGood Cottages and Trailer Park and had constructed the two-story concrete-block building as a rental office and a movie theater,” according to the 2006 report by Panamerican Construction. MarGood was sold to Elhanon and

Sandy Combs in 1986. They ran MarGood until they sold it to Collier County in 2005. Deemed as historically relevant land, it was partially purchased using Florida Forever Funds. The county recently remodeled the park, reopening it as MarGood Harbor Park in March of 2012.

More lodging became available thanks to Robert and Ann Bianchi not long after Hurricane Donna. According to Carlin’s book, “Ann was used to being busy and felt she needed something to occupy her time. Shortly after the hurricane disaster, her husband built her the Pink House Motel Apartments on the harbor at Pear Tree Avenue which is still operating.”

With a post office, restaurant, inn, general store, movie theater and trailer park, Goodland was officially a tourist destination. Stan Gober, owner of Stan’s Idle Hour in Goodland, remembers the early days he spent in Goodland fishing. In his book, “Stan: An American Story,” he describes those days. “For about eleven years, 1958 to 1969, I was coming to Marco Island fishing every other weekend.” Stan lived in Miami, working for the telephone company, but was slowly convinced to move to Goodland. “Eventually we acquired a 16-foot boat and docked at the Idle Hour restaurant in Goodland. I had met – and bought bait from – the owner, Herb Robinson, and his wife, Betsy.” Robinson also owned a small 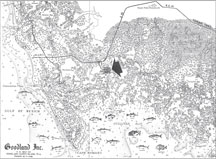 motel located across the street from The Idle Hour. “Herb said to me, “Stan, you like it here so much, why don’t you buy this place?” In 1969, Stan bought the motel, and a year later he bought the restaurant, renaming it Stan’s Idle Hour. The motel was known as The Village Inn. It stuck around until Hurricane Wilma of 2005 damaged the building beyond repair. Stan’s is still around, however. Hundreds flock to Goodland every Sunday to check out the live music and entertainment at Stan’s and the other restaurants in town.

During a phone call the other day, Stan told me that much of what was around when he moved is still around today. “Coon Key was the only marina then. It was kind of small, but they got by.” Coon Key is now Walker’s Coon Key Marina, located in the southeast corner of Goodland. Calusa Marina occupies the southwest corner of Goodland.

The Old Marco Lodge Restaurant came to Goodland in 1965. “All traffic came to a halt when Alex and Marjorie Tasetano towed the 95-year old Marco Lodge from Old Marco to its new home in Goodland. The historic date was January 4, 1965,” state Perdichizzi and Kirk, authors of “A Girl Called Tommie.” The Tasetanos sold The Old 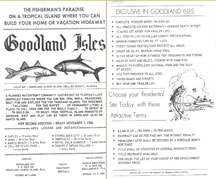 Marco Lodge, but it still functions as a restaurant with a great view. Visitors can even hold baby alligators there.

Now we come to the portion of history where this oh-so-lovely brochure fits in. Offering lots at $3,500 with only ten percent down, Curcie Brothers Developers capitalized on the idea of “The Fisherman’s Paradise.” A deposit of $100 would hold the lot of one’s choice. As I dug to learn more about the Curcie Brothers company, I came up short. I ask those reading to contact me with any information they may have about Goodland’s history or this brochure.

In a way, much of the history of Goodland seems to be a mystery, and maybe that’s for a reason. After all, it is the unknown that always seems to intrigue us the most.