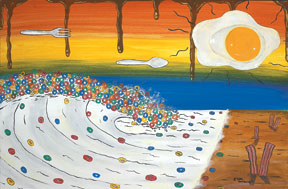 Profiled for his Dia de los Muertos artwork on page A/18, Esau Rodriguez is using his artistic talents to hopefully help those suffering with cancer.

“When I was living in Gainesville, my brother was diagnosed with cancer. We were living together and we were both filled with anxiety; it was a really rough time.” His brother, Edgar, “was very strong, but the only thing he would complain about was the hospital food and that he was never hungry.”

The only option to help induce hunger for Edgar was a specific type of steroid. “He was surprised that there weren’t any alternatives to making people hungry,” adds Esau. “He never took it, but that’s all they had to help.”

Thinking of ways in which he could help his brother, Esau decided to paint a portrait that would hopefully make his brother hungry. “I did my breakfast painting because of him.” he states. “Pictures of food can make people hungry, but they can also make them nauseated. So what I did with the breakfast painting is I mixed a soothing scenic with food. It kind of helps people relax while they’re getting hungry. I’ve done my own research and as far as I’ve seen, no one has done this sort of visual stimulation toward appetites.”

Esau took the next step and contacted Naples Community Hospital regarding an independent research study based on this concept. “They were very excited. They thought it was a really interesting idea.”

So did Edgar. “When I told him about it he was more excited than I was. He just told me to do it right now because it’s a great idea.”

Esau is currently working on a final proposal for NCH as well as a new scenic. “I’m working on a mountain scene made of all different kinds of desserts; cinnamon rolls for mountains and marshmallow peeps for birds. It’s going to be much more realistic looking.”

As for his brother, Edgar can only imagine whether or not the pictures would have an impact. “He took chemotherapy like a champ and he’s very healthy now. He just graduated and is working in Washington for a Congressman.”

Edgar’s hard work and determination has inspired Esau to continue his research, hopefully some day proving that his paintings are good enough to eat.