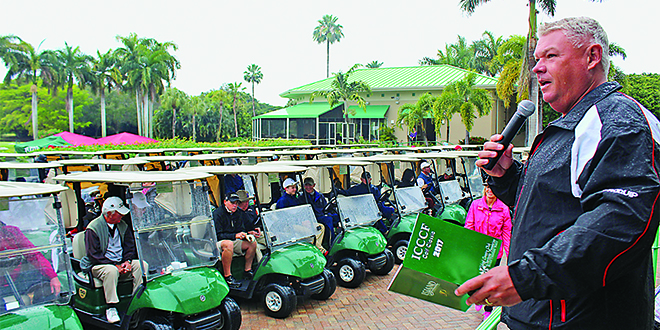 On January 29, the ICCCF welcomed golfers of all ages to participate in the charity fundraiser. The Golf Classic is the one of two major fundraising events that the Island Country Club Charitable Foundation holds, the first being the Joy of Giving, which provides Christmas presents for children in need.

To date the foundation has raised over 1.6 million dollars for local charities and community programs. In this past year alone the foundation, through the Golf Classic and Joy of Giving events, has been able to raise $120,000.

“Despite a downpour of rain and 50-degree weather, we concluded our largest, most profitable charitable event ever,” said Gary Landis, chairman of the Charitable Foundation. “It’s a testament to the belief that our members have in supporting the foundation and doing the best we can for our community.”

Present that day was professional golfer and 10-time winner on the PGA Tour Fuzzy Zoeller. Zoeller, who owns his own line of vodka (Fuzzy Vodka), 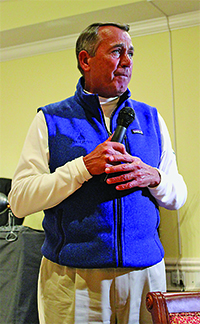 Former Speaker of the House John Boehner addresses the crowd.

was one of four major sponsors of the Golf Classic. The other sponsors include Mercedes Benz, a group of about 40 Island Country members dubbed the “F-Troop,” and a local family foundation also comprised of Island Country Club members.

Later that evening, after the golfers dried off, a Caribbean inspired buffet dinner was served. Golfers and non-golfers attended the dinner, mingling with friends, and giving others a hard time for their performance on the greens.

Also in attendance was Former Speaker of the House John Boehner. Boehner, who divides his time between Ohio and Marco Island, commenced the evening with a short speech.

“It’s events like this that raise money to help local charities that are the backbone of who we are as Americans. I just want to stand up and say thanks for all you do,” said John Boehner.

Once everyone was well fed, the winners of the Golf Classic were recognized. In first place were Gary and Anne Landis, Bill Stobbart, Armand Procacci, and Kevin Williams. They collectively donated their winnings to the local chapter of the American Cancer Society.

This year 12 local charities and organizations will receive grants from the foundation.

For more information on the Island Country Club Charitable Foundation check out: www.island-countryclub.org/Charitable-Foundation.